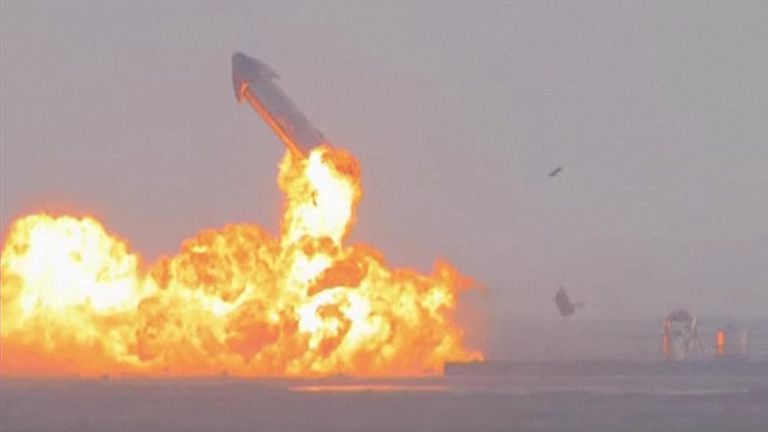 A booster for SpaceX’s next-generation Starship spacecraft burst into flames on the launchpad on Monday.

The fireball engulfed the rocket during the ground test-fire in Texas, potentially meaning that Elon Musk’s plans to launch Starship into orbit this year will be delayed.

“Actually not good. Team is assessing damage,” the billionaire wrote on Twitter.

There have been no reports of injuries.

In February the SpaceX founder said he was highly confident that Starship would launch into orbit this year, despite technical and regulatory challenges.

Combined with its first stage, known as Super Heavy, the launch vehicle will be the largest and most powerful ever designed – even taller than the Saturn V that took man to the moon – and able to generate more than twice the thrust.

The power of the launch vehicle will be necessary for SpaceX’s plans to be involved with NASA’s Artemis programme, which aims to take the first woman and the next man to the moon.

Mr Musk also wants to use the rocket to travel to Mars and establish a permanent human presence there, but told his audience in Texas that he didn’t want to limit the potential applications for relatively affordable travel off-planet.

SpaceX plans to launch the first ever private lunar mission in 2023, taking Japanese entrepreneur Yusaku Maezawa in a fly-by of the Moon during a week-long journey.

“This flight is an important step toward enabling access for people who dream of travelling to space,” the company states.

“When the Wright Brothers first took off most people were just riding horses, they would not have imagined that there would be tens of thousands of aircraft flying to every corner of the world.”

SpaceX has faced serious production challenges with its Raptor 2 engines used in the Super Heavy rocket, and earlier this year warned of potential insolvency if the company couldn’t fix them.

What are the challenges?

Increased production will help SpaceX continue to test the Starship spacecraft, which – like the company’s Falcon 9 before it – has had an explosive beginning to life.

Seven of the rocket’s prototypes have been destroyed and eight scrapped after test flights. The company plans to launch a Starship spacecraft atop the Super Heavy booster for an orbital flight, although it is not clear when that will be completed.

One of the major challenges facing SpaceX is an environmental assessment of its Boca Chica test-flight and production facility by the US Federal Aviation Administration.

Such assessments can often take years and lead to prolonged litigation.

Mr Musk said: “We don’t have a ton of insight into where things stand with the FAA… We have gotten sort of a rough indication there may be an approval in March. But that’s all we know.”

In a “worst-case” scenario, where approval for the facility was denied, SpaceX would shift the entire Starship programme to the Kennedy Space Centre in Florida, which would cause a delay of up to eight months.

‘A very good boy’: Police dog uncovers 5,000lbs of meth – one of the biggest busts in San Diego history | US News