After Brexit, Merkel probably dabbed her eyes – and moved on | Angela Merkel 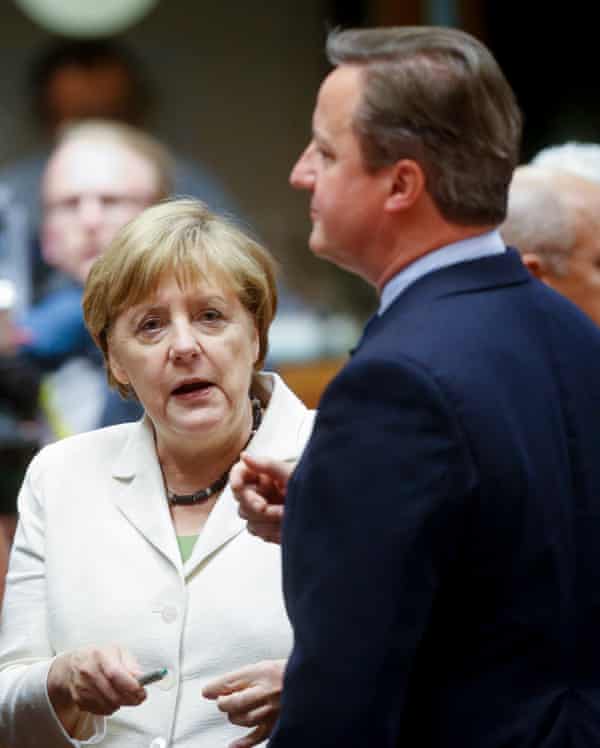 Angela Merkel, now on an affable UK farewell tour including tea with the Queen, leaves a paradoxical legacy for many British.

She is often hailed as the upholder of a liberal Europe that faced a populist onslaught from Donald Trump. But she is also the woman who refused to throw David Cameron a lifeline on immigration ahead of the Brexit referendum, judging it not in the national interest. But for Merkel’s stance then, her jocular host now might not have been Boris Johnson, who leaves her cold, but an ageing Cameron in his 11th year in office.

Cameron liked her, describing the east German as an Anglophile who admired British science and democracy from the wrong side of the Berlin Wall. She was the best-briefed person in the room, he recalled, capable of working out in advance other people’s negotiating needs and strategies.

Not that Cameron in his autobiography begrudges Merkel’s unwillingness to concede more on the free movement of EU workers. He largely blames himself in not selling a deal that could have given the UK a comfortable future in the EU.

Sir Paul Lever, the former British ambassador to Berlin in the six years to 2003, said Berlin weighed the odds of Britain’s importance to the EU, and the euro: “Berlin’s judgement of the price the EU should pay to keep the UK in the EU reflected their assessment of the value of continued British membership.”

That does not mean there was no emotional side to Germany’s attachment to British membership of the EU, not least as a free-trading, liberal counterweight to France’s more protectionist tendencies. Asked how Germany would react if the UK left the EU, the German finance minister, Wolfgang Schäuble, replied: “We will cry.”

As a woman of famously pragmatic temperament, one suspects Merkel dabbed her eyes relatively quickly after the referendum result before asking: “What’s next?”

Indeed, within a year, Merkel gave the go-ahead for her diplomats to start negotiating a bilateral agreement with the UK on continued cooperation with Germany on defence and foreign policy. That joint declaration got shelved during the bitter Brexit talks, and if relations had truly soured over the Northern Ireland protocol or vaccine nationalism, it might have died completely.

But the current German ambassador to London, Andreas Michaelis, has been an assiduous advocate of greater cooperation and helped revive the initiative, leading to its publication this week.

Much of it is non-controversial, but it was striking that London and Berlin could find consensual words on Nato, Iran, the Indo-Pacific, future relations with Putin, and the balance between the pursuit of trade and human rights. Both cabinets will now meet once a year, giving a focal point for ministers to think about the relationship.

Johnson even signed up to an affirmation of European unity, something the Germans prize, since they do not want bilateral cooperation with the UK to be seen as a way for the UK to weaken EU foreign policy, or make smaller EU states feel sidelined.

But Merkel will be gone by the end of September, leaving a hole in European politics. The 90-minute foreign policy debate between the candidates to be her successor hosted last week by the Munich Security Conference showed how Brexit is part of the past. The European issue gripping German politicians is relations with Joe Biden and Hungary’s Viktor Orbán, not Britain. True, if the Greens make it into government, perhaps via a traffic light coalition, there will be a sharper edge to German foreign policy on arms exports, human rights and relations with autocratic powers. But it is the German-French motor that will drive Europe from now on. The UK has chosen a detachable sidecar.