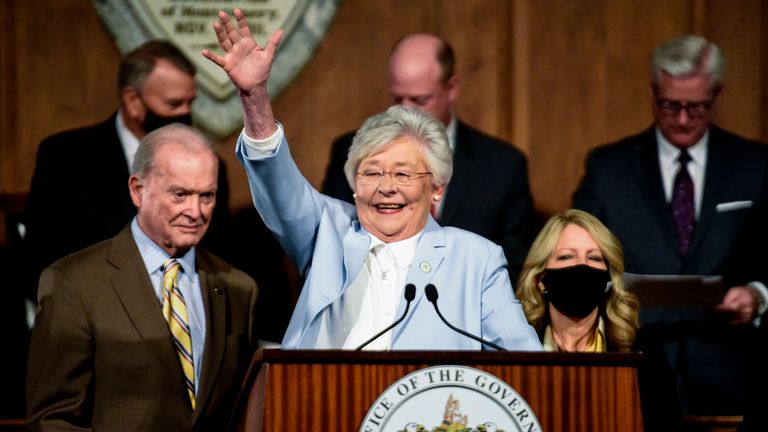 Alabama’s governor has signed into law new rules that could see doctors face jail if they continue to prescribe hormone treatment and puberty-blocking medication to transgender youths.

LGBTQ advocates have described it as a combination “bathroom bill” and “Don’t Say Gay” bill, echoing similarly controversial legislation recently passed in other US states.

What do the new laws mean in practice?

It’s now a crime for parents and medical professionals to provide gender-affirming medical care – such as puberty blockers, hormones, and surgery – to people under the age of 18.

The new rules also mean transgender young people must use the bathroom of the gender assigned to them at birth, not the gender they identify with, hence the “bathroom bill” label it’s been given by critics.

Governor Kay Ivey, a conservative Republican, said: “I believe very strongly that if the Good Lord made you a boy, you are a boy, and if he made you a girl, you are a girl.”

She signed the bills into law just a day after it was passed by the state’s House of Representatives.

NBC News reports that her signature makes Alabama the third state in the country to pass a measure restricting transition-related care, though it is the first state to impose criminal penalties.

‘I’m scared now’: What the laws mean to those affected

Teenager Harleigh Walker spent her spring break trying to persuade members of the House to reject the legislation which would affect transgender children like herself.

The new rules mean her doctor faces up to 10 years behind bars if she continues to prescribe the 15-year-old her testosterone-blocking drugs.

“Honestly, I’m a little scared now,” Harleigh said after learning the bill had passed. “But we’re still going to fight – no matter what.”

She said she is holding out hope the bill will be blocked by a court, meanwhile her family is desperate to find another state where she can continue her medical care.

It is “weird”, she said, to see politicians with no medical experience call her medication “child abuse” when six doctors agreed she should have it after years of consultations.

Her father, Jeff Walker, said many of the same politicians also recently argued, “It’s your body, your choice”, when it came to COVID vaccinations.

Backlash from activists, medical experts, and the president

Alabama is among several states with Republican-controlled legislatures to have proposed such laws.

Florida has introduced a bill that prohibits “classroom discussion about sexual orientation or gender identity” in the state’s primary schools. Nicknamed the “Don’t Say Gay” bill, it was signed into law by Governor Ron DeSantis – widely considered a potential 2024 presidential candidate.

Republican legislators in Ohio have introduced similar legislation, but gone one step further and also target “divisive” teachings on race. The Texas governor has said passing a similar bill to Florida is a “top priority” for next year.

Arizona has introduced laws that would force school employees to tell parents if a child confides in them about being transgender. And Indiana, Arizona, and Iowa have all introduced bills allowing parents to opt-out of lessons on sexual orientation or gender identity.

Last month, the Justice Department sent a letter to all 50 state attorney generals, warning them blocking trans and nonbinary youth from receiving gender-affirming care could be an infringement of federal constitutional protections.

Wave of new conservative laws across US

The bills targeting transgender people are part of a wave of restrictive new laws sweeping across the US.

In Oklahoma, the House has passed a bill that would make performing an abortion illegal, punishable by up to 10 years in prison.

It follows Texas, which has the nation’s most restrictive abortion law, and bans the procedure after doctors can detect a fetal heartbeat – around six weeks into a pregnancy – with no exceptions for rape, sexual abuse, incest, or fetal anomalies. This came into force in September.

Tennessee, Idaho, and Missouri have all rushed to introduce copycat bills. Arkansas would see abortion banned at any stage of pregnancy, except when a mother’s life is at risk.

According to the Guttmacher Institute, an organisation focused on reproductive health rights, 71 proposed bills have been introduced in 28 states this year to outlaw or ban abortions.