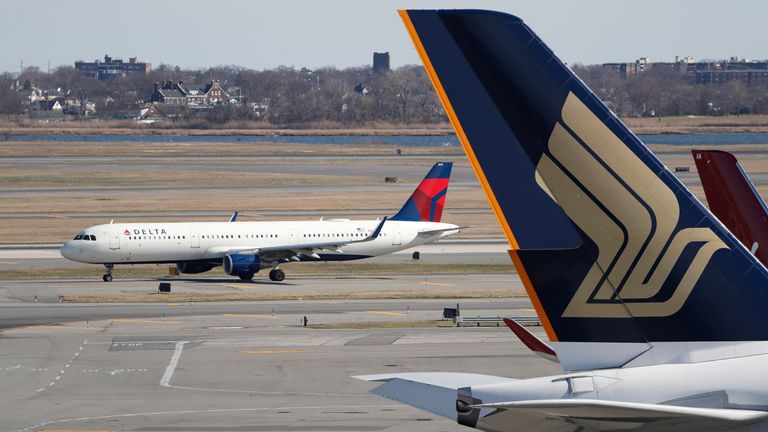 An American Airlines passenger who allegedly shoved a flight attendant, spat at crew members, and tried to open the cabin door mid-flight has been hit with an $81,950 (£62,950) fine – the largest ever issued by US aviation regulators.

A second fine of $77,272 (£59,360) was issued to a Delta Air Lines passenger who bit a fellow traveller after trying to hug and kiss another.

Since January last year, when the Federal Aviation Administration (FAA) imposed a zero-tolerance policy, the agency has proposed fines totalling around $7m (£5.38m) for disruptive passengers.

The two latest fines are the highest to be issued so far.

What happened on the American Airlines flight?

The American Airlines passenger was flying from Dallas, Texas, to Charlotte, North Carolina, in July when she “threatened to hurt the flight attendant” that offered her help after she fell into the aisle.

The unnamed woman then pushed the flight attendant aside and tried to open the cabin door.

“After the passenger was restrained in flex cuffs, she spit at, headbutted, bit, and tried to kick the crew and other passengers,” authorities added.

And what about the Delta incident?

The Delta passenger was on a flight from Las Vegas to Atlanta, also in July, when she “attempted to hug and kiss the passenger seated next to her; walked to the front of the aircraft to try to exit during flight; refused to return to her seat; and bit another passenger multiple times”.

Delta said it “has zero tolerance for unruly behaviour at our airports and on our flights as nothing is more important than the safety of our customers and people”.

The zero-tolerance policy was imposed when passenger incidents escalated around the time of the US Capitol riots, and remained high after President Joe Biden imposed a mandate requiring passengers to wear masks on planes and in airports because of COVID.

Neither of these incidents involved passengers objecting to wearing masks – a policy that will either expire or be renewed on 18 April.

The FAA said in February it has referred 80 unruly plane passengers to the FBI for potential criminal prosecution.

US transport secretary Pete Buttigieg said the administration and Congress are looking at a “no-fly” list for unruly passengers.