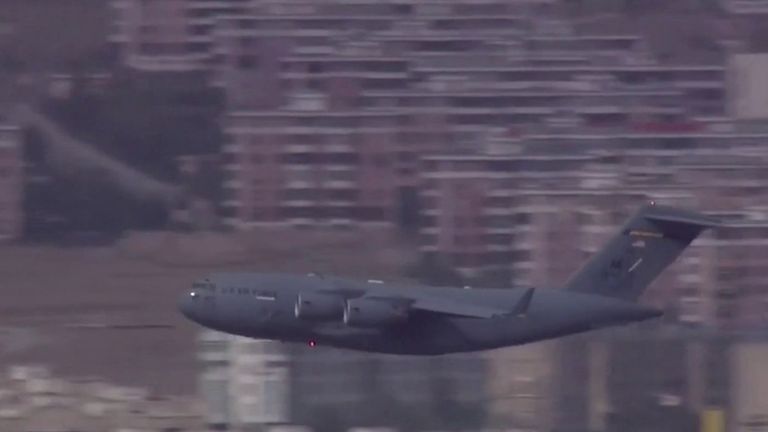 In the end, it was the Taliban, with their volleys of gunfire, who announced the Americans had gone – uncomfortably apt really, given they have been calling the shots for the past few weeks.

For days, in Washington, the US administration had refused to say quite when their Afghanistan withdrawal would be complete.

For obvious security reasons they wouldn’t confirm precisely what ’31 August’ meant. Was it as that day began? Was it midnight at the end of that day? US time, or Afghan time?

It turned out to be just before midnight as 30 August became 31 August.

In the darkness, the last American plane pulled up and away from the tarmac of Hamid Karzai International Airport.

It brought to an end two weeks of total chaos, but also a remarkable airlift like no other in history.

Through the day, the planes had left, one after the other, banking sharply to avoid the rocket fire from below.

This is what the end of the chaotic exit looked like; the end of a 20-year-old war. A country and a people left to a future, unknown.

At the Pentagon in Washington, an announcement came eventually to confirm what the Taliban images had already shown us.

“I’m here to announce the completion of our withdrawal from Afghanistan, and the end of the military mission,” Marine Corps General Frank McKenzie, the commander of US Central Command said.

“The last C-17 lifted off from Hamid Karzai International Airport on August 30, this afternoon, at 3:29 pm, East Coast time, and the last manned aircraft is now clearing the airspace above Afghanistan.”

An hour or so later from the State department, America’s top diplomat emerged from a brutal fortnight for American leadership, looking forward, not back.

“Now, US military fights have ended, and our troops have departed Afghanistan. A new chapter of America’s engagement with Afghanistan has begun. It’s one in which we will lead with our diplomacy. The military mission is over. A new diplomatic mission has begun,” Antony Blinken said.

“The main point I want to drive home here today is that America’s work in Afghanistan continues. We have a plan for what’s next. We’re putting it into action,” he continued, concluding, “we’ll honour all those brave men and women in the United States and many other countries who risked or sacrificed their lives as part of this long mission.”

And with that, America’s longest war was over. They chose to walk away, and they ended up running, taking their allies with them. A deadline set by the American president had been met, but at what cost?

The United States has strained key relationships with close allies.

In the UK, the worth of the so-called ‘special relationship’ has become a central debate.

In Brussels, NATO members have had it confirmed, if they didn’t already know, that without America, their alliance is pretty worthless.

In Moscow and Beijing, they received the same message. The masters inside the Kremlin and at Zhongnanhai will see this episode as more evidence that the American president is beholden to a weary and insular American public in ways that Putin and Xi are not. The advantages, for them, are there to seize.

Then there is terrorism. The return this weekend of the bodies of 13 troops killed by ISIS terrorists last week in Kabul was the tragic image that undermined the president’s justification for the withdrawal.

Afghanistan is still a home for terrorists. America is leaving a country broken, not fixed.

“There are probably at least 2,000 hardcore ISIS fighters in Afghanistan now, and of course many of those come from the prisons that were opened a few days ago,” General McKenzie admitted in the same briefing where he declared the mission to be at an end.

“So that number is up and it’s probably as high as it’s ever been in quite a while and that’s going to be a challenge for the Taliban I believe in the days to come,” the General added.

From the White House, the president released only a statement defending the withdrawal and thanking his troops. He will address the nation later today.

For now, the fundamental unanswered questions were left for his spokesperson.

“Is the US more or less safe today than we were before the Taliban took over,” Jen Psaki was asked.

“Well again, we are not going to do anything that’s going to allow terrorists to grow or prosper in Afghanistan,” she said.

Repeatedly the administration have ignored or plainly denied the fact that al Qaeda and the Taliban remain close and the hard line Haqqani Network, whose number include some of America’s most-wanted, now hold key posts in the Taliban.

In New York, a UN Security Council meeting was an attempt to find optimism and some common ground between the Americans, Russia and China.

They hope that the Taliban can prove it is a different entity from the one it once was. The evidence isn’t very encouraging but the UN will hold the mullahs to their word to allow the continued safe passage of Afghans and foreigners out of the country.

As night fell in Washington, an image was released which will define a military endeavour that proved politically impossible and so tragically bloody.

Through the green of a night-vision lens, it showed the last American soldier to leave the battlefield – Major-General Chris Donahue, commander of the 82nd Airbourne Division. Afghanistan behind him.

Hurricane Ida: Man missing after alligator bites off his arm in Louisiana floodwaters | US News