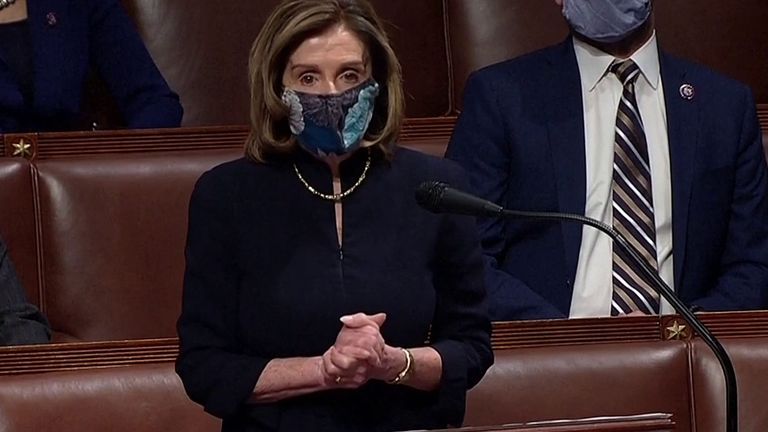 Donald Trump has now reached what must be the nadir of his presidency – and if this was an episode of reality TV, it would be an unbelievable ending.

It’s hard to draw too many conclusions just yet, but there’s no doubt after this latest political car crash, brand Trump is severely – if not fatally – damaged.

Mr Trump – the Pinocchio-in-chief – now finds himself as the only president in US history to be impeached twice, having been accused of being a “clear and present danger” to the country he is supposed to lead.

It’s an ignominious legacy to a presidency, which has consistently and wilfully inverted the truth and smashed up basic conventions.

The impeachment is a political process, not a criminal one.

If it was a criminal one, this stage is the equivalent of being charged – and he’s accused of incitement of insurrection.

When you read those words they sound incredible; because they are, even in the context of a man who has defied all expectations of political normality.

Donald Trump has effectively been indicted with leading an attack on the government of America with the aim of overthrowing a legitimate election result.

It would be hard to write that as a fictional script line – the leader of the United States, which casts itself as the Jeffersonian policeman of the free world, has entered the darkness of savagery, where free and fair elections are not accepted and violence is used to overturn them.

The article of impeachment will now go before the Senate for trial.

That almost certainly will not happen until after President-elect Joe Biden’s inauguration on 20 January – and it’s still unclear whether it will succeed.

The vote in the House of Representatives did, however, have bi-partisan support, with 10 Republicans voting in favour of the motion.

The crisis now gripping America is multidimensional, with innumerable twists and subplots. Republicans are in meltdown as the question of whether to stick with Trump or ditch him consumes the soul of the party.

His base, after all, is still valuable – he won nearly 75 million votes in the last election.


Donald Trump appealed for calm after his second impeachment

Meanwhile, the trial in the Senate for the Democrats will consume valuable time and energy at the start of Mr Biden‘s presidency, overshadowing his agenda of economic reform and taming the pandemic.

But the bigger question is what this means for America going forward.

It is hard to overstate the global significance of this shameful episode in the country’s history. In many ways it is a tragedy underlining the end of American hegemony as the US cedes the new century to China.

And on the domestic front, this disgraceful saga is far from over. The bitterness of the Senate trial will likely sow further division in a country that needs to lick and heal its wounds.

In a week’s time, America will have a new president but it will not yet mark a fresh start.

A dangerous road littered with the toxic detritus of Trumpism lies ahead.

Snoop Dogg ‘ragequits’ and swears during Twitch gaming livestream when…