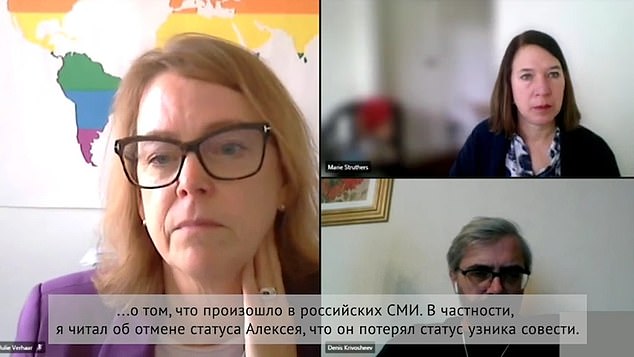 Amnesty International chiefs have admitted undermining Alexei Navalny by stripping him of his ‘prisoner of conscience’ status during a prank call by Russian pranksters.

Mr Navalny, who was locked up last month amid Western anger at Moscow, was yesterday dispossessed of the special title conferred by Amnesty because of anti-migrant statements he made more than a decade ago.

The human rights group defended its decision, saying it had been ‘bombarded’ with complaints and couldn’t ignore Mr Navalny’s ‘hate speech’ – which had been seized upon by Kremlin propagandists.

In yesterday’s Zoom call with ‘Volkov’, Amnesty’s top brass expressed their regret at stripping Mr Navalny of his status and pleaded with the campaigns chief to help them steer the media narrative back onto Mr Navalny’s plight and away from his Amnesty status. 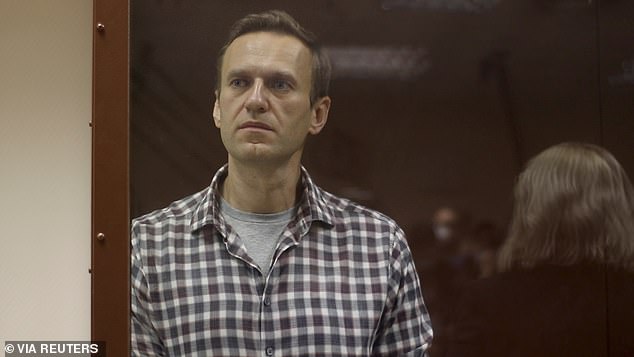 Kremlin critic Alexei Navalny stands inside a defendant dock during a court hearing in Moscow, Russia, Russia February 20. Three days before, on his detention, Amnesty had conferred on him their ‘prisoner of conscience’ status. But they delisted him after identifying ‘hate speech’ from the mid-2000s 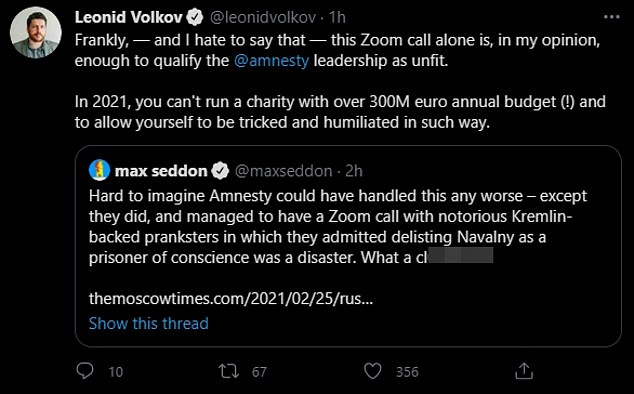 Today, the real Leonid Volkov expressed his disbelief and disappointment at Amnesty, having watched the prank call

Amnesty’s Acting Secretary General of Julie Verhaar tweeted Mr Volkov on Wednesday to thank him for their conversation. She has since removed the tweet

Denis Krivosheev, Amnesty’s head of research for Eastern Europe, unwittingly told the pranksters: ‘When you were angry you were entirely justified and frankly it’s done damage to us as well because frankly in Russia there is no case that’s more important and more regretful to undermine – and that’s what happened, unintentionally.

‘So if we can move forward that’s great. We would like to move the media attention away from Amnesty’s internal decisions and the language it uses and how it comes to them because this will do more damage. And frankly these are difficult processes for us to deal with.

‘And then if we can be publicly seen to be on the same side, I think this is the best we can do for Alexei.’

The Amnesty chiefs told the pranksters they were keen to start a ‘short, clear and powerful’ social media campaign to promote Mr Navalny’s cause to demand his release and to ‘steer the conversation away from “prisoner of conscience.”‘

Today, the real Leonid Volkov expressed his disbelief and disappointment at Amnesty, having watched the prank call.

‘Frankly, – and I hate to say it – this Zoom call alone is, in my opinion, enough to qualify the @amnesty leadership as unfit. In 2021, you can’t run a charity with over 300M euro annual budget (!) and to allow yourself to be tricked and humiliated in such way,’ he tweeted.

It came after Ms Verhaar, the head of Amnesty, tweeted Mr Volkov on Wednesday to thank him for their conversation. She has since taken down the tweet.

Mr Volkov wrote: ‘Hmm, General Secretary of Amnesty thanks me for the constructive, direct conversation. But only I do not know her, and have never spoken to her; I wouldn’t be surprised if she spoke to “prankster Vovan”; I would not be surprised if they make decisions on the basis of such messages.’

Earlier, in the Zoom call, Ms Verhaar had told the pranksters: ‘We’ve had a discussion about the fallout that happened yesterday and we’re really looking to have this call to see how we can move forward because it was really none of our intention to have this happen.

‘We really want Mr Navalny, his case and his unjust detention to be at the forefront of what we’re doing.

‘And we have some ideas of how we can do that, but we really want to use this opportunity to hear where you are and how we can work together.’

The conversation boiled over into absurdity towards the end when the prankster, pretending to be Mr Volkov, apologised for previous critical tweets directed at Amnesty.

‘Even my Twitter I am sorry about that, I have wrote that you have ate a lot of sh*t and made your decision, but it’s true,’ the prankster told the Amnesty officials.

But they did not seem to realise they were being fooled as they all smiled and laughed awkwardly while ‘Volkov’ apologised for his ‘radical Twitter style.’ 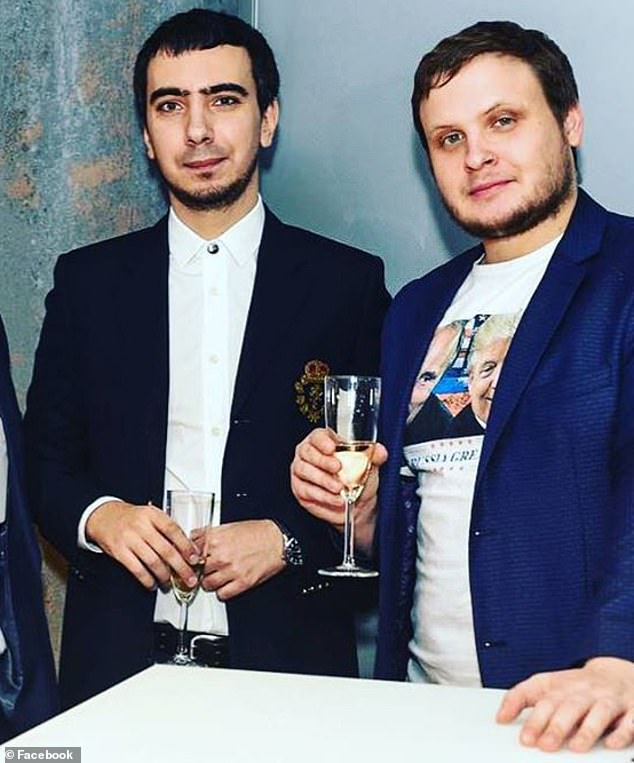 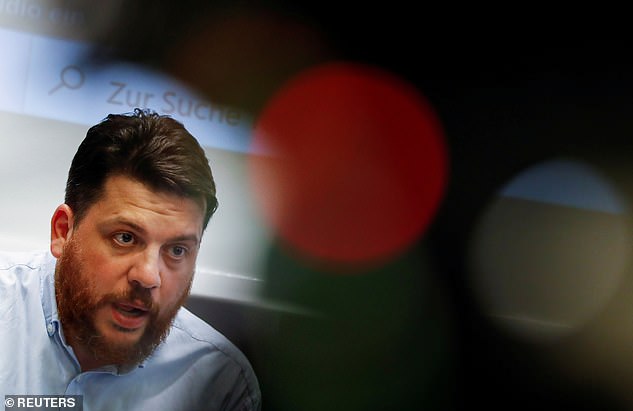 The real Leonid Volkov: Navalny’s chief of staff speaks at a news conference in Berlin in August after the opposition leader was poisoned by Novichok

The pranksters also asked about whether Mr Navalny’s special status could be reinstated, but the Amnesty officials said this would only make matters worse.

Mr Krivosheev said: ‘I don’t think it would do anyone any good for anyone for Amnesty to flip once again and say no, no, we changed our mind, he is a prisoner of conscience. What I think can help is finding the right way forward.

‘And for this reason we want him out as soon as possible and use every possible venue to put as much pressure on the Russian government to get him out.

‘And if we could agree on that and not be seen as in disagreement I think that would be very important.

‘So rather than looking for a way in which a decision could be changed, I am suggesting that we find the best way to project our message, which is: free Navalny now.’

It comes after Mr Navalny’s supporters yesterday reacted furiously to Amnesty’s decision, accusing the organisation of falling into a Kremlin trap by being drawn towards Mr Navalny’s nationalist comments from the mid-2000s – for which he has previously apologised.

Critics included Alexander Golovach, a lawyer for Mr Navalny’s FBK anti-corruption group, who said he was renouncing the ‘prisoner of conscience’ status that Amnesty gave him in 2018.

Navalny, who has carved out a following campaigning against official corruption, has been criticised for past nationalist statements against illegal immigration and for attending an annual nationalist march several years ago.

In a 2007 video, he called for the deportation of migrants to prevent the rise of far-right violence. ‘We have a right to be (ethnic) Russians in Russia. And we’ll defend that right,’ he said in the video.

Navalny could not be reached for comment as he was in jail. His allies protested the move by Amnesty on Twitter. 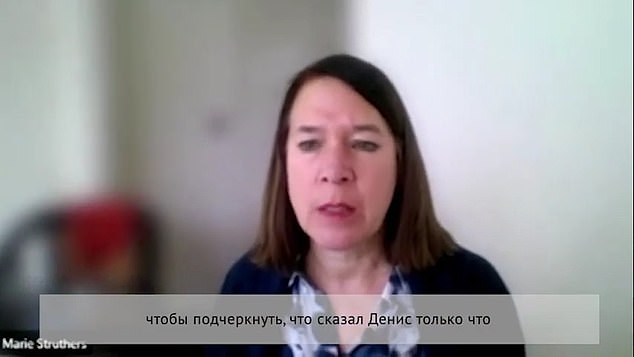 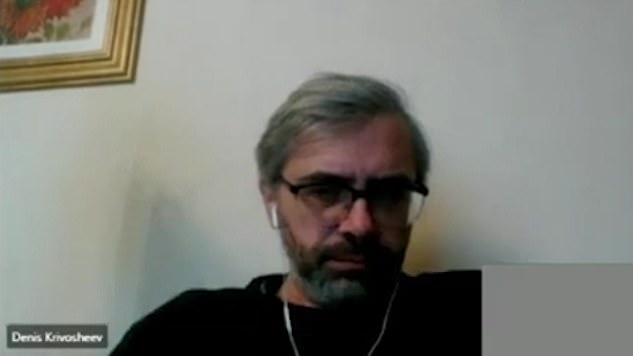 Denis Krivosheev, head of research for Eastern Europe, unwittingly told the pranksters: ‘When you were angry you were entirely justified and frankly it’s done damage to us as well because frankly in Russia there is no case that’s more important and more regretful to undermine – and that’s what happened, unintentionally’

MailOnline has contacted Amnesty for comment but they were unable to provide a statement specifically about the prank video.

In a general statement about Mr Navalny, Ms Vehaar said: ”The speculation around Amnesty International’s use of the term ‘prisoner of conscience’ is detracting attention from our core demand that Aleksei Navalny be freed immediately.

‘This distraction only serves the Russian authorities, who have jailed Navalny on politically motivated charges, simply because he dared to criticise them.

‘The term ‘prisoner of conscience’ is a specific description based on a range of internal criteria established by Amnesty. There should be no confusion: nothing Navalny has said in the past justifies his current detention, which is purely politically motivated.

‘Navalny has been arbitrarily detained for exercising his right to freedom of expression, and for this reason we continue to campaign for his immediate release.

‘We note that some of Aleksei Navalny’s past comments have been actively used by his opponents to discredit him.

‘Amnesty International has itself been the target of Russian government smear campaigns, as a result of our consistent condemnation of the Kremlin’s appalling human rights record.

‘We campaign for the release of unjustly detained people on a daily basis, and we will continue to do so for Aleksei Navalny.

‘Navalny’s detention for his peaceful opposition and exposure of corruption is unlawful, and we will continue to campaign ceaselessly for his release and his right to freedom of expression.’