Another step in ending America’s ‘forever wars’ – but what will be the fallout? | World News 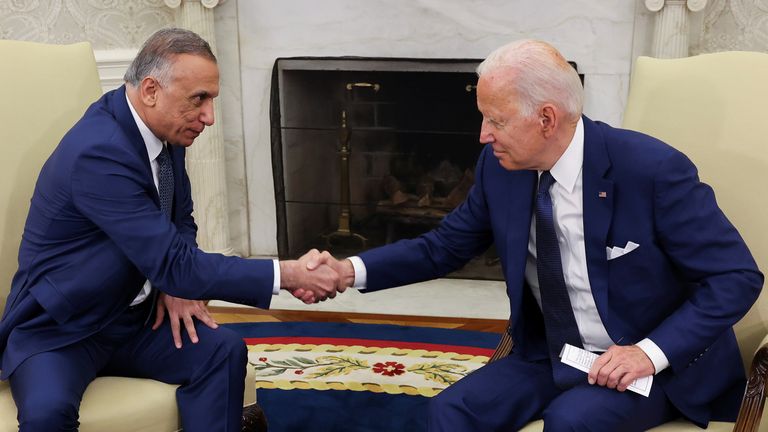 In announcing the withdrawal of US combat troops from Iraq, President Joe Biden is taking another step towards ending America’s so-called forever wars in the Middle East.

The decision, in Mr Biden’s words, to “shift to a new phase” of the US mission in Iraq comes just weeks after the Biden administration confirmed the complete withdrawal of US troops from Afghanistan by the anniversary of 9/11 and probably by the end of August.

But the two situations are markedly different.

The announcement on Iraq is more political theatre than something that will have a concrete effect on the ground because the reality is that no American troops have fought in Iraq for at least a year.

US press secretary Jen Psaki would not be drawn on how many of the 2,500 US troops in Iraq will remain by New Year’s Day 2022 – but some combat troops will be redeployed in training or intelligence roles.

While the withdrawal from Afghanistan was instigated by the US, the winding down of the operation in Iraq is at the request of the Iraqi Prime Minister Mustafa al Kadhimi, who has to navigate a fiendishly difficult political balancing act.

Mr Kadhimi has to find a solution which keeps the anti-American factions in Iraq happy, and satisfies their Iranian allies, while also recognising the stabilising influence provided by an American military presence in the country.

He had been under increased pressure from Iran to force a withdrawal of US troops since last year when a US drone strike at Baghdad airport killed the top Iranian commander Qassem Soleimani.

The key question is whether this announcement will destabilise the situation in Iraq, as has been the case in Afghanistan where civilian deaths have risen since May, when the US and its allies began withdrawing troops.

The main threat comes from a potential ISIS revival, assisted by a demoralised Iraqi army devoid of US combat support – but President Biden insisted troops would continue to support Iraq in their fight against ISIS.

Mexican Workers on Border Get Vaccines to Aid Them, and the U.S. Economy

Student stabbed around ‘120 times’ by man she mistook as her Uber driver, court hears | US News