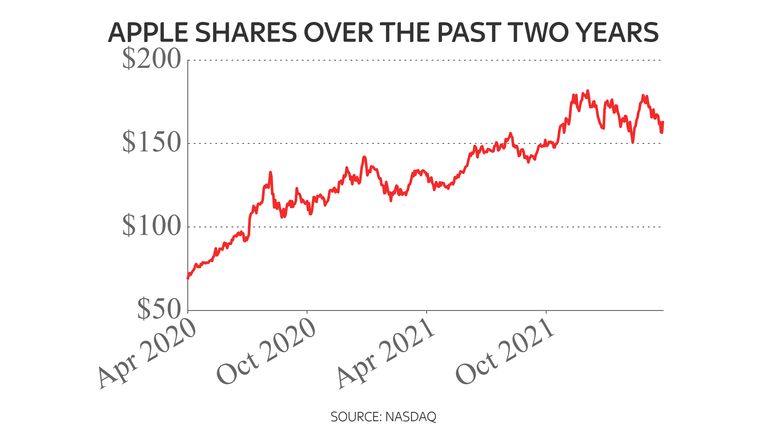 Apple has reported record revenue and profits for the second quarter of its financial year but warned that it expects a greater impact ahead from the effects of Russia’s war in Ukraine.

The world’s most valuable listed company said revenue between January-March came in at $97.3bn – $3bn more than analysts had predicted and up almost 9% on the same period last year.

Just over $50bn of that came from iPhone sales while services, including music and video subscriptions, contributed a record sum just shy of $20bn.

The iPhone maker’s shares were up by 3% in after-hours trading – having gained 4.5% in regular dealings earlier in the day in anticipation of a strong showing despite several major headwinds.

Apple’s stock has been particularly sensitive in recent months to COVID production shutdowns in China and chip shortages – also linked to pandemic disruption – as global supply fails to live up to high demand.

It has damaged chip-reliant industries from carmakers to game console producers over the past year.

However, Apple shares have outperformed the wider tech-heavy Nasdaq index as its quarterly numbers rarely disappoint, with demand for its core iPhones remaining high despite the trouble behind the scenes.

Analysts have expressed concern that surging inflation could hamper sales growth ahead and Apple’s chief financial officer said he expected pressure on consumer budgets to grow in the current quarter, as war-linked inflation takes a toll globally.

He also noted, in an interview with Reuters, that it had endured a sales hit from the company’s withdrawal from the Russian market but declined to specify the hit and admitted the number would grow in the current third quarter.

On the subject of supply chain disruption, he said iPad had endured the worst pain – describing it as “very significant”, with sales falling on the same period last year.

Second quarter net income – a measure of pre-tax profit – came in at $25bn and Apple rewarded shareholders with a 5% rise in its dividend while the board also approved an additional $90bn share buyback.