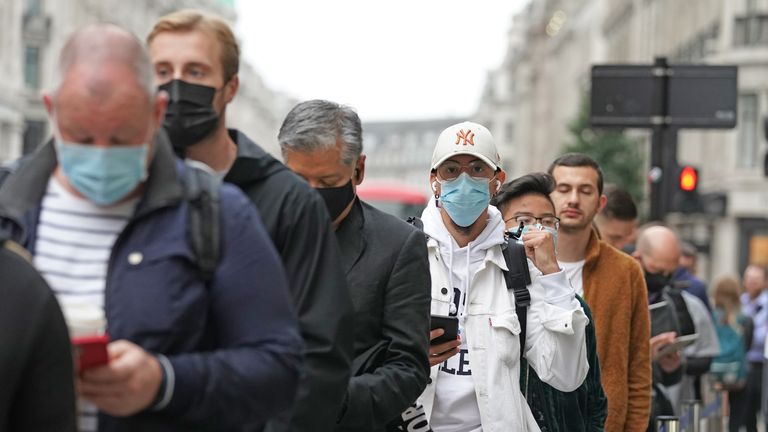 The value of shares in Apple dropped on Tuesday following reports that the company has slashed production numbers of its new iPhone 13.

Apple is going to make 10 million fewer devices than it had initially planned, reported Bloomberg News, due to the ongoing global shortage of computer chips.

The expected impact on the company’s business caused Apple’s share price to go down by 1.2% in after-hours trading.

It comes as a global shortage of semiconductors impacts all industries that need computing power to run, from car manufacturers through to games consoles and mobile phones.

Earlier this year, Apple’s chief executive Tim Cook warned that the company had been using a buffer stock of semiconductors to meet demand.

Mr Cook said Apple anticipated sales of iPads and Macs would be $3bn to $4bn lower in its third quarter than would be the case without supply issues.

The company launched its new iPhone 13 range in September and is set to hold another special event next week, in which it is expected to announce new Macs and MacBooks.

The iPhone 13 has a new look, with diagonally-aligned cameras on the rear and what Apple says is a 20% smaller notch in the front.

But the launch was muted compared to the events in 2020, when Apple held three separate launches for a range of products using the company’s own chips.

While these chips are not something that Apple has to compete with other industries for, older “legacy node” technology used to manage battery life and other elements of the phone was a supply issue.

“Most of our issue is on licensing those legacy nodes, there are many different people not only in the same industry, but across other industries that are using legacy nodes,” explained Mr Cook.

COVID-19: US to reopen land borders to fully vaccinated travellers next month | US News