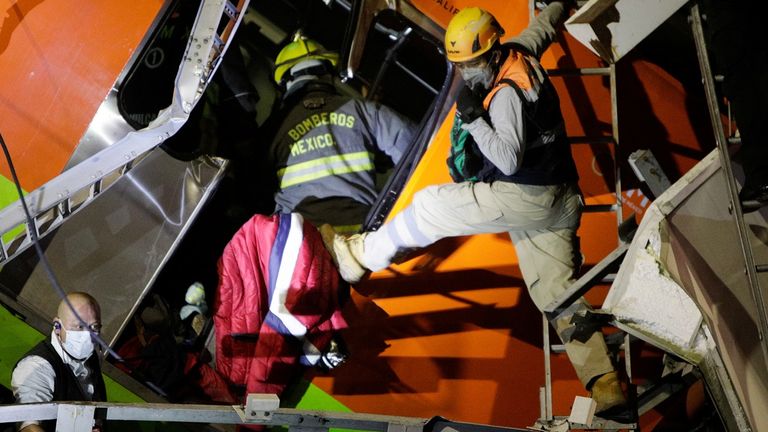 At least 15 people have died after an overpass in Mexico City collapsed, derailing a train and leaving cars trapped under rubble.

More than 30 people have also been taken to hospital after the accident, said the country’s civil protection agency, and around 70 injured in total.

Emergency crews and firefighters have been searching through the wreckage for survivors.

There were still people trapped inside the train but it was unclear if they were alive, said Mexico City Mayor Claudia Sheinbaum.

The accident happened at 22.30 local time (4.30 UK time) on the metro’s Line 12 – the construction of which has been plagued with complaints and accusations of irregularities.

The mayor said a support beam had given way as the train passed over it.

Rescue efforts were paused briefly at around midnight as a crane was brought in to deal with the partially hanging train, which was described as “very weak”.

Friends and relatives of people believed to be involved gathered at the scene in the southern borough of Tlahuac.

Oscar Lopez, 26, was hoping for news of his friend, Adriana Salas, who is six months pregnant and was on the subway after a day at work.

He said there had been no answer from her since the time of the incident.

Mexico’s foreign minister Marcelo Ebrard tweeted: “What has happened on the metro today is a terrible tragedy.”