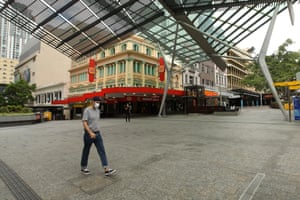 Good morning all, Matilda Boseley here to take you through the day’s news, Covid-19 or otherwise.

If you see anything in your area or online that you think I should be aware of, make sure you send it through to me on Twitter @MatildaBoseley or by email on [email protected]

Now, on to the news of today.

Residents in the northern beaches of Syndey have continued to celebrate after being freed from the worst of the strict Covid-19 restrictions imposed on the area since an outbreak began before Christmas. But the state’s chief health officer, Dr Kerry Chant, says “these next 14 days is going to be pivotal” as the state still struggles to mop up the last of community transmission in the city.

NSW recorded three new coronavirus cases on Sunday, all close contacts that contact tracers missed who were active in the community while infectious.

A number of new venues, including the Costco in Casula and a shopping centre and Service NSW site in Bankstown, have been declared potential exposure sites.

The other big event we will be looking out for today is that all-important press conference from Queensland premier Annastacia Palaszczuk as she updates the state on how Brisbane’s three-day lockdown has gone. Today is the third (and hopefully final) day of the lockdown, brought about by fears that the highly contagious UK strain of the coronavirus had entered the community in Brisbane. But with no additional cases of community transmission discovered so far residents are hopeful that normal life will be able to resume as early as this evening.