Baseball star Joey Votto performs ‘Griddy dance’ with young fan after she holds up sign saying ‘will you make a TikTok with me?’ | US News 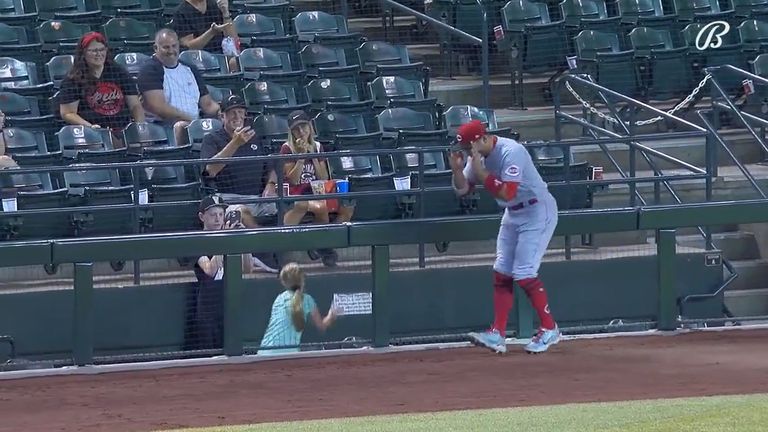 As the old song by Frank Sinatra goes: “Take me out to the ballgame, take me out with the crowd”… but “let me record a viral TikTok with a baseball player”?

That’s exactly what happened when Cincinnati Reds’ star Joey Votto spotted a young girl in the crowd trying to get his attention.

Jean Parks, 12, held up a sign near the Reds’ team dugout that read: “Joey Votto, will you make a TikTok with me?”

The heart-warming exchange took place before Monday night’s game in Phoenix as Votto and his teammates got ready to play the Arizona Diamondbacks.

It was captured on video by game broadcaster Bally Sports Ohio, who reported that Jean hails from the Arizona capital.

Six-time All-Star and prolific hitter Votto went over to the stands and was seen coming up with a dance routine with Jean.

Some of the moves he suggested clearly didn’t make the cut however, perhaps down to Jean’s expert direction.

The pair were seen a little later on doing the “Griddy dance” – made famous by NFL star wide receiver Justin Jefferson – in front of the dugout.

A nice moment for Votto and an experience with a likely future Hall of Famer that Jean is not likely to forget in a hurry.

The TikTok video may have also proven to be a good luck charm – the Reds went on to beat the Diamondbacks 5-4 – though Votto went without a getting a hit on the night.