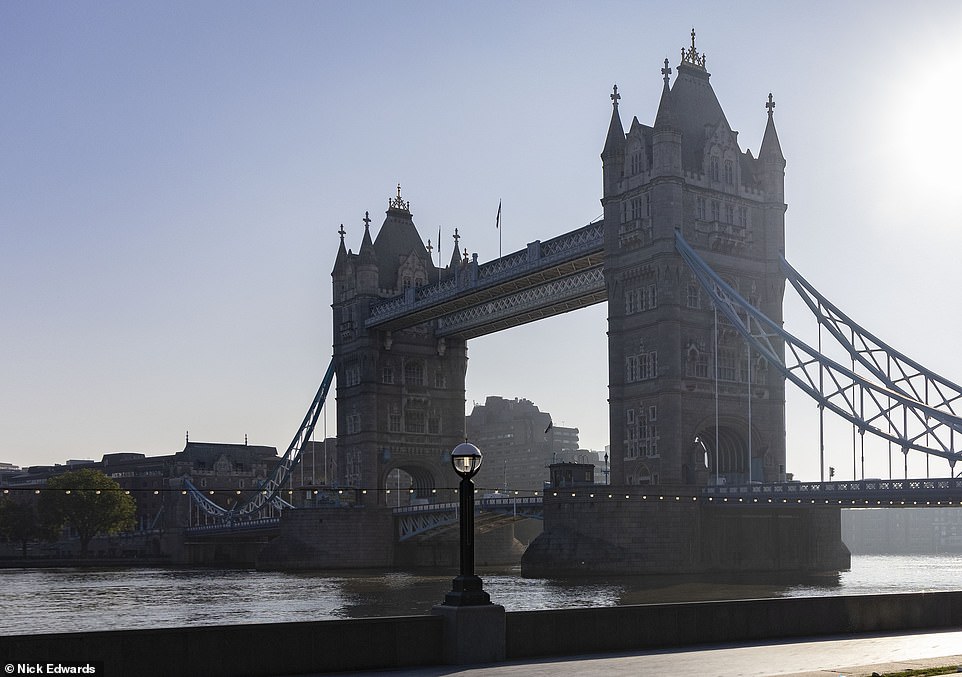 Britain could see record temperatures for the second day in a row today with the mercury set to hit 81F (27C) on the first day of meteorological summer following the hottest day of the year so far on bank holiday Monday.

Most of the UK will be covered in glorious sunshine again today – beating temperatures on the Algarve – with the warmest weather expected in the Midlands, western England, north and west Wales and western Scotland.

It comes after a maximum temperature of 77.2F (25.1C) was recorded at Kinlochewe in the Scottish Highlands as Britons enjoyed the long weekend and newly restored freedoms following the lifting of many lockdown rules.

This surpassed the previous high for 2021, set on March 30 at Kew Gardens in West London when the temperature reached 75.1F (24.5C). But the new record is unlikely to last long, with highs of 81F (27C) predicted today.

Temperatures could get even higher tomorrow, with 82F (28C) expected. Met Office forecaster Marco Petagna said: ‘Lots of fine, sunny weather around – if anything, temperatures up a degree or so on Monday. 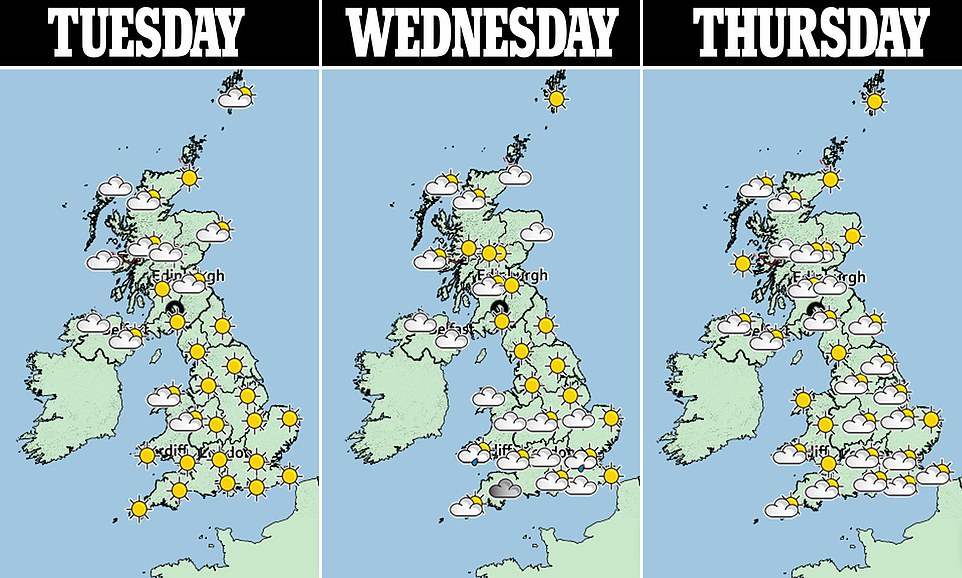 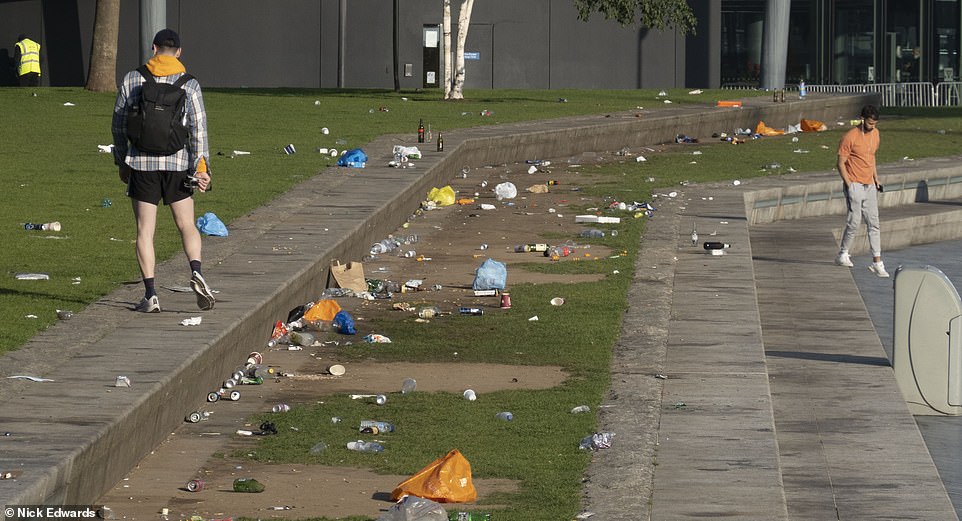 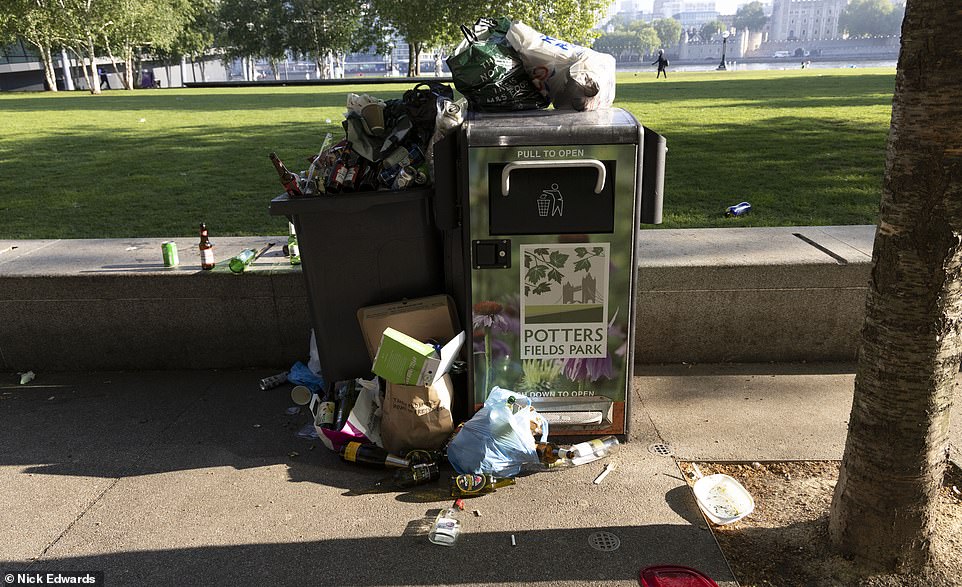 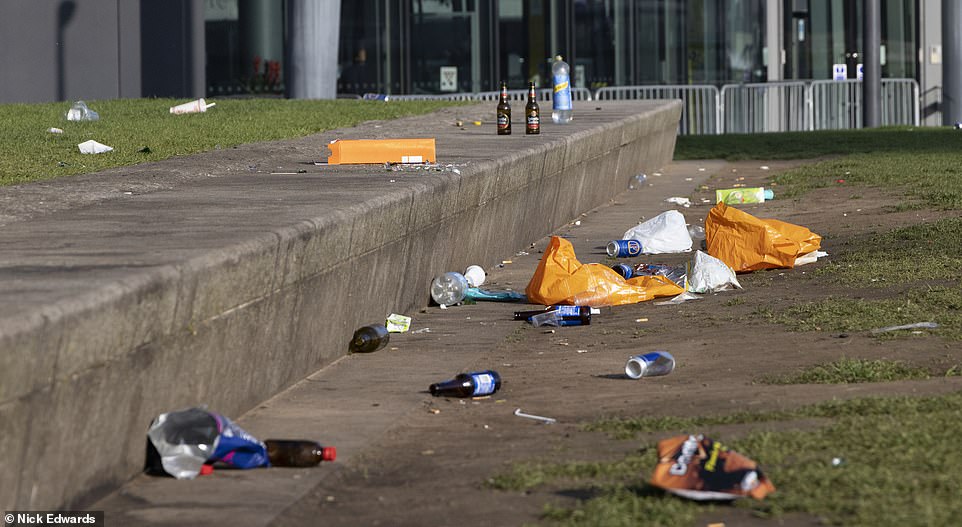 ‘We’re looking again at some very warm sunshine around for many northern and eastern parts of the UK, but thundery showers will start to push in across south-west England and Wales by Wednesday morning.’

He said the unsettled conditions will start to feed north and eastwards across England, Wales and Northern Ireland, although temperatures could still top 82F (28C) across parts of the Midlands and East Anglia tomorrow.

There is a continued risk of thundery showers across the east and south-east England on Thursday and Friday, with conditions beginning to turn fresher from the west heading into the weekend.

‘There will be a bit more cloud around to end the week, with temperatures coming back down to average, the high teens for most,’ Mr Petagna said.

Crowds flocked to enjoy the outdoors despite reminders from several local councils to heed Covid-19 rules including restrictions on gatherings and social distancing.

The British Beer and Pub Association estimated that 42 million pints were served in pubs across the country yesterday as punters hit the sun-drenched beer gardens.

Although it was the warmest day so far in 2021, the weather was not especially hot for this time of year.

But after so many damp and miserable weeks, many were keen to make the most of it.

The record temperature for a late May bank holiday Monday is 91F (32.8C), recorded in 1944 at Horsham in West Sussex, Tunbridge Wells in Kent, and Regent’s Park in central London.

Blackpool Council was among local authorities which urged people to remember the existing Covid rules and to ‘enjoy yourselves safely’.

Those visiting the Kent seaside resorts of Broadstairs, Margate and Ramsgate were advised by Thanet Council to ‘avoid crowds or consider coming back another time’ if beaches were busy. 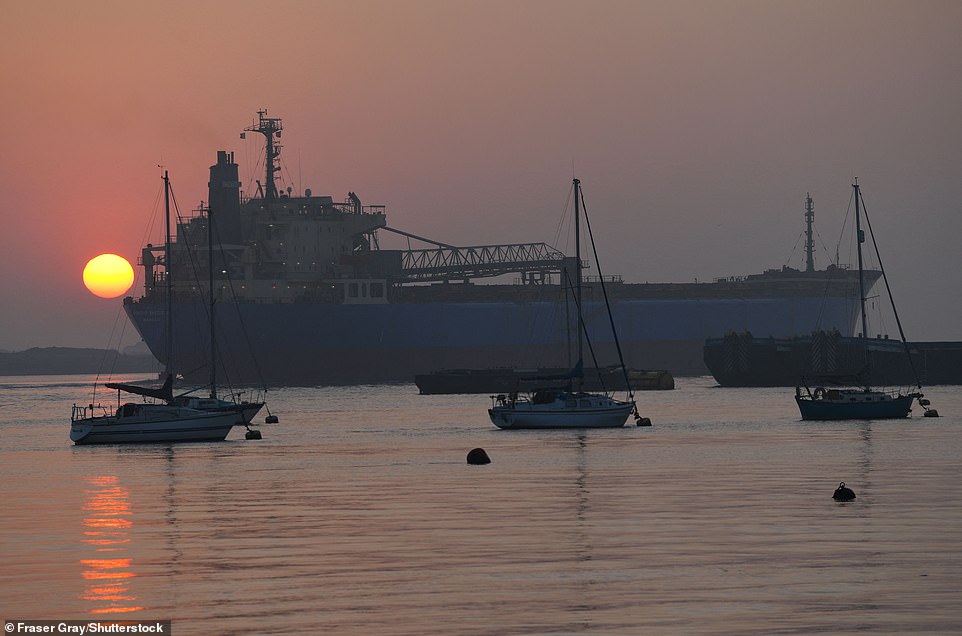 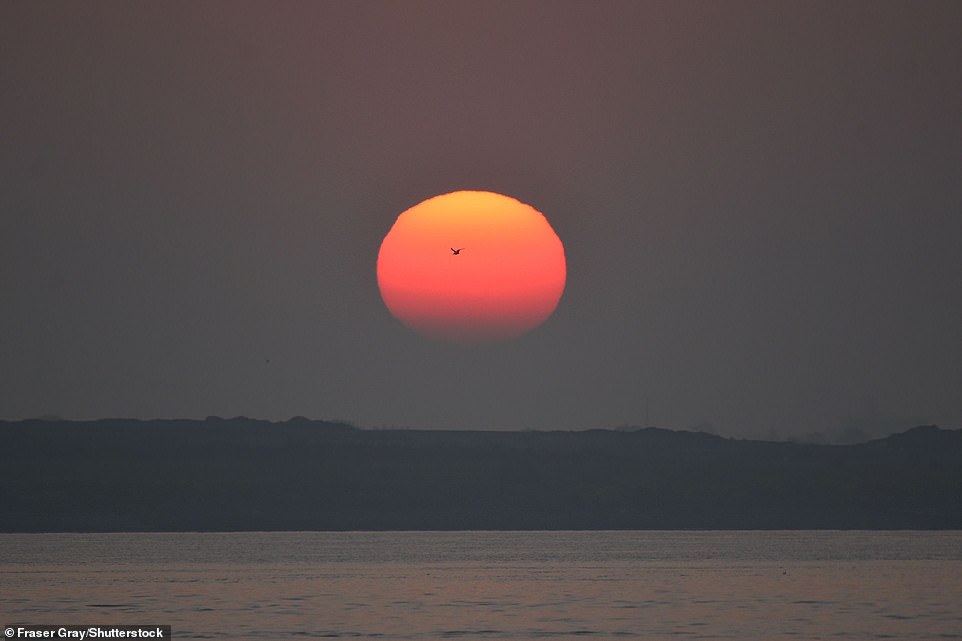 The car park at the National Trust-owned beach at Formby, Liverpool, filled up by lunchtime and was closed to further arrivals. Many sunseekers stressed they were keen to abide by the rules.

Boris Johnson was today urged by scientists to delay the Government’s decision on whether to fully lift the national Covid-19 lockdown in three weeks’ time on June 21 until the latest data can be ‘scientifically considered’.

The British Medical Association warned the UK was at a ‘pivotal moment’ in its fight against coronavirus and urged the Prime Minister to stick to his pledge in February that he would be guided by ‘data not dates’.

Experts added that Ministers should speed up second doses of the vaccine for Britons, saying this was ‘critical’ to controlling the spread of the Indian variant which is now threatening to derail plans for so-called ‘freedom day’.

One consultant respiratory physician referred to ‘mini Covid volanoes’ erupting at certain hospitals around the country, which are threatening to ‘explode’. Dr Lisa Spencer, from the University of Liverpool, told BBC Radio 4’s Today programme this morning: ‘There are a few hotspots as we have been hearing on the news around the UK.

‘These are areas where the variant first identified in India seem to be causing the majority of the infections spreading quickly. And these hospitals represent mini Covid volcanoes. That’s the problem. And if we don’t handle these volcanoes carefully, they could explode and send a massive gas plume across much more of the UK.’

It comes as a two-week targeted and enhanced testing programme for asymptomatic people began today in two postcodes in the Canterbury area after the emergence of a number of cases of the Indian strain in the Kent city.

Coronavirus cases are on the rise nationally, and between May 24 and 30 there were 60 deaths reported within 28 days of a positive coronavirus test – an increase of 42.9 per cent compared with the previous seven days.

Yesterday, one further death in the UK was recorded by the same metric and 3,383 lab-confirmed cases were confirmed. The 22,474 cases between May 24 and 30 was 26.8 per cent higher than the previous seven days.

Natalie Armstrong and her family, who travelled from Birmingham to Blackpool, said: ‘We’re making sure we’re following all the rules, hand sanitising, wearing our face masks, but it’s just nice to finally do something a bit normal.’

Fellow holidaymaker Jamie Pye, who was also in Blackpool, said: ‘It’s amazing to be back and do things… it’s like a new world again.’

Warnings about gatherings in the sunshine came amid claims from some scientists that the full relaxation of lockdown rules planned for June 21 should be delayed due to rising cases of the Indian variant of coronavirus.

In Scotland, kayakers were out in force on Loch Ness, Inverness-shire, while at Largs, in Ayrshire, day-trippers queued for ice creams and fish suppers. Tiffany Irvin, 37, who owns a chippie and ice cream parlour there, said: ‘There’s a brilliant vibe around the town – the car parks were full by 10am.’

CalMac used social media to give advance warning of a 90-minute queue for vehicles and foot passengers for the ferry from Largs to Cumbrae.

The RAC said that close to 11million car journeys were expected yesterday, making it the busiest day on Britain’s roads this year.

With all those cars on the road, congestion was inevitable. Traffic queued on the M8 in central Glasgow at the onslip to the M77. Families heading to Ayrshire resorts were also struggling on the A77, following an accident near Ayr.

The A82 was jammed south-bound near Balloch, Dunbartonshire, due to an accident involving a caravan.

And in the East, nagging haar from the North Sea continued to affect coastal spots in Fife, Angus and Aberdeenshire.

The fine weather was marred by a string of tragedies, including children getting into trouble in the water and violent scenes.

A two-year-old boy was last night critically ill in hospital after he was rescued from a lake at a nature reserve.

The toddler was found unresponsive in the water at Swanwick Lake, near Fareham, Hampshire, on Sunday evening. He was taken by ambulance to Southampton General Hospital.

Hampshire Police said they had arrested an 18-year-old man who is understood to have been with the toddler.

Meanwhile, emergency services were still searching part of the River Thames this morning for a boy seen getting into difficulty in the water.

The teenager entered the river between Bourne End, Buckinghamshire, and Cookham, Berkshire, at around 3pm but was not seen getting out, prompting a search by the police and fire service.

Elsewhere, a man was left in a critical condition and two other people were seriously injured after sickening stabbing on the beach at Formby on Sunday evening.

Merseyside Police said two men aged 20 and a 16-year-old boy were taken to hospital by air ambulance after the ‘unprovoked attack’.

One of the men is in a critical but stable condition and the conditions of the other man and the teenager are described as serious but not life-threatening, a force spokesman said. 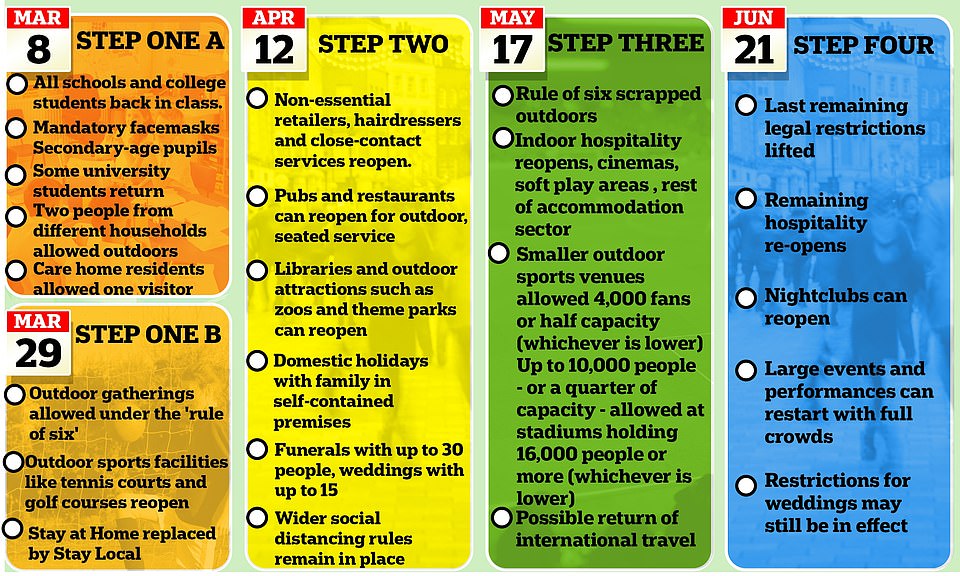 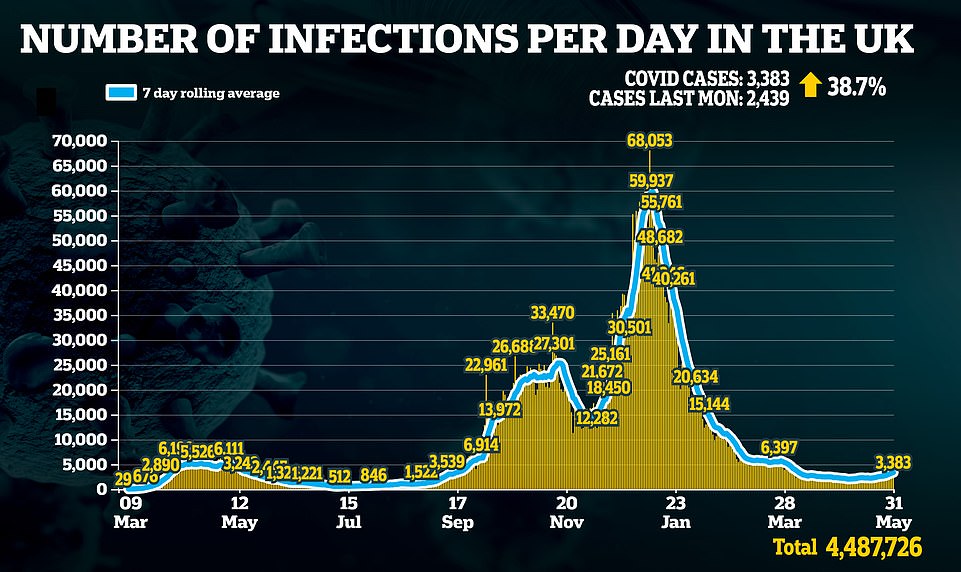 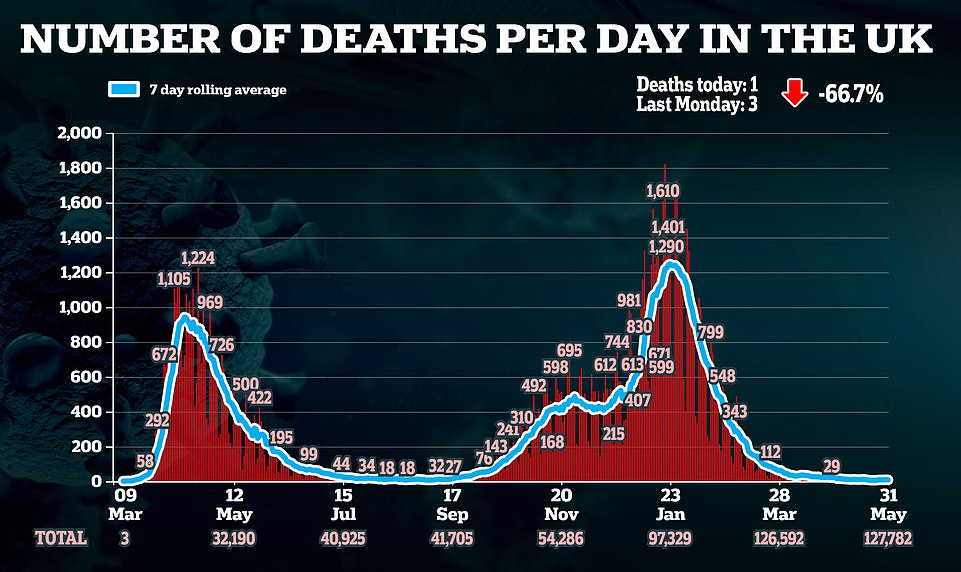 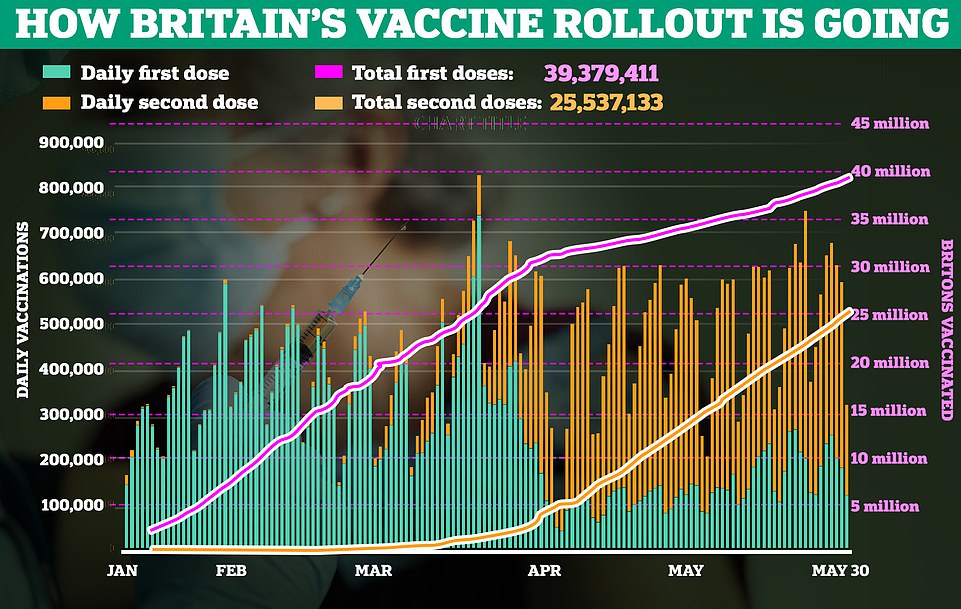 There were claims on social media that the incident was a pre-arranged ‘straightener’ – a fight between rival groups, one of which had turned up with weapons.

But Detective Superintendent Mark Baker, of Merseyside Police, said: ‘We believe that this was an unprovoked attack.

‘The fact that three young people have been attacked in this way is truly shocking and disappointing, and our officers will be increasing patrols in the area over the coming days and weeks.’

In an earlier incident which marred the upbeat feel of the sunny bank holiday weekend, there were shocking scenes showing police desperately trying to restrain aggressive pub-goers in Scunthorpe, Lincolnshire.

Four officers and a member of bar staff were reportedly assaulted by a group of men at The Blue Bell Inn, a Wetherspoons branch, on Friday evening.