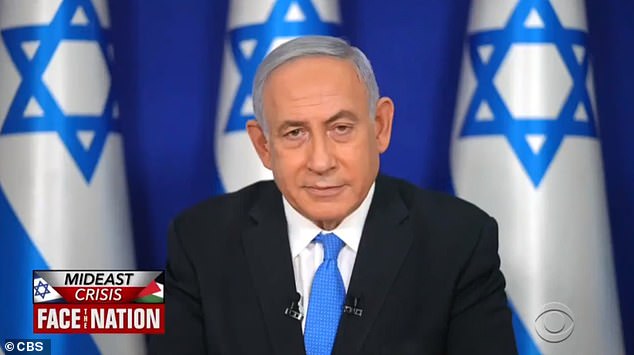 Israeli Prime Minister Benjamin Netanyahu on Sunday defended his attacks on the Gaza strip, saying a country has a right to defend itself, and argued the United States knows ‘d**n well’ it would do the same thing.

In a defiant interview on CBS’ Face the Nation, Netanyahu denied any political motivation for the attacks that have left 174 Palestinians dead, including 47 children.  In Israel, 10 people have been killed in total, including two children, with barrages of rockets fired from Gaza.

‘I think any country has to defend itself, and we’ll do whatever it takes to restore order and the security of our people,’ he said.

He argued he was fighting Hamas, a terrorist organization that hid behind civilians, as tensions rose between Israelis and Palestinians to levels not seen since a 2014 war.

‘Frankly, if Hamas thought that they could just fire on our rockets and then sit back and enjoy immunity, that’s false. We are targeting a terrorist organization that is targeting our civilians and hiding behind their civilians, using them as human shields. We’re doing everything we can to hit the terrorists themselves, their rockets their rocket caches and their arms, but we’re not going to just let them get away with it,’ he said.

And, when pressed on the issue, he snapped back to interviewer John Dickinson.

‘What would you do if it happened to Washington and New York? You know d**n well what you’d do,’ Netanyahu said.

With the conflict between Israel and Palestine entering its seventh day, the international community is stepping up: the United Nations Security Council met on Sunday. And President Joe Biden spoke on Saturday with both Netanyahu and Palestinian President Mahmoud Abbas in an effort to restore calm.

U.S. Sec. of State Blinken says Israel has an “extra burden” to avoid civilian casualties in response to attacks. PM Netanyahu argues Israeli forces are meeting it: “The Israeli army is second to none in seeking to minimize civilian casualties while protecting our own civilians.” pic.twitter.com/toJX0gRTym

Israeli Prime Minister Benjamin Netanyahu defended his attacks on the Gaza strip to an American audience, appearing on CBS’ Face the Nation 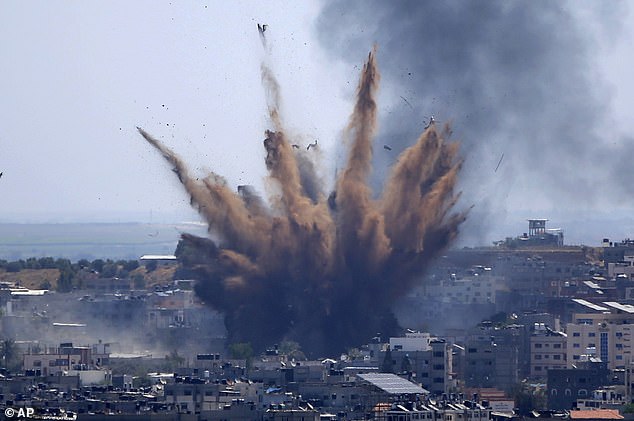 Netanyahu, meanwhile, denied his actions were about staying in power.

‘Anybody who knows me knows that I’ve never, ever subordinated security concerns, the life of our soldiers the life of our citizens for political interests, that’s just hogwash,’ he added.

‘I’ll do what I have to do to protect the lives of Israeli citizens and to restore peace and make peace with for our countries. I’m glad that we have a restoration of some considerable calm within Israel. That’s my goal to restore peace and quiet and to assure tranquility,’ he noted.

Among the Israeli targets was a high-rise that housed media outlets including The Associated Press and Al Jazeera.

The Israeli Defence Force (IDF) – the country’s military – defended the destruction of the building, saying it was a legitimate military target, containing Hamas military offices, and that it had given warnings to civilians to get out of the building before the attack.

Netanyahu said it was a ‘perfectly legitimate target.’

There was ‘an intelligence office for the Palestinian terrorist organization housed in that building that plots and organizes terror attacks against Israeli civilians so it’s a perfectly legitimate target,’ he told CBS.

The Israeli prime minister said it wasn’t luck that no one was killed in that strike but because people in the building were warned ahead of the attack.

‘It wasn’t luck. It’s because we took special pains to call people in those buildings to make sure that the premises were vacated. And that’s why we brought down that building,’ he said.

He also said the information regarding the attack had been shared with U.S. authorities.

But the strike was condemned by Al Jazeera and the AP, which asked the Israelis to put forward evidence.

‘AP’s bureau has been in this building for 15 years. We have had no indication Hamas was in the building or active in the building,’ the news organization said. ‘We would never knowingly put our journalists at risk.’

A series of attacks on Sunday morning escalated the situation with world leaders expressing concern about the on-going battle as Palestinian protesters clashed with Israeli forces in the occupied West Bank.

Israeli fighter jets struck several sites in the densely populated Gaza Strip, with one strike on a three-storey building in the Shati refugee camp killed 10 members of an extended family – two mothers and their four children each. Israel’s army claimed the building was used by senior Hamas officials. 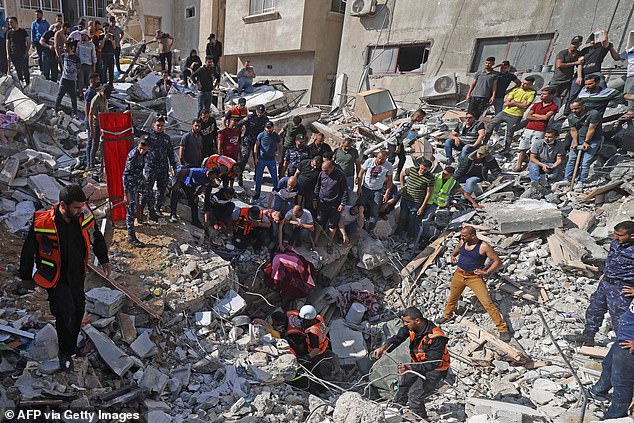 This morning, photographs, which are too graphic to publish, show dead children being pulled from the wreckage of homes in Gaza after Israeli air strikes last night. Other pictures show rescuers helping injured children from bombed out homes (pictured) 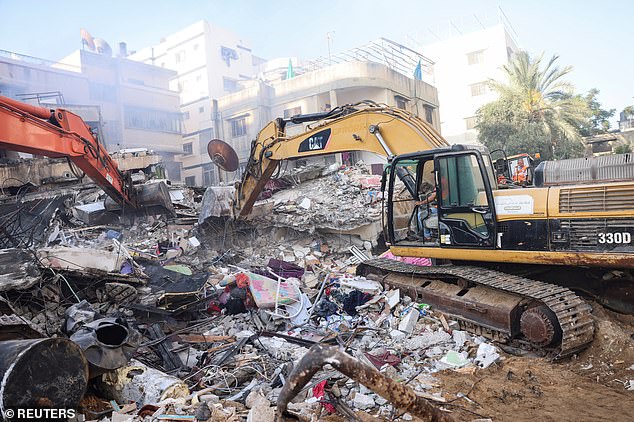 Excavators work to clear the rubble at the site of Israeli air strikes, in Gaza. Israli military last night targeted the home of Yehiyeh Sinwar. Sinwar is the most senior Hamas leader inside the territory. The Israeli military also launched a strike on the home of his brother

Meanwhile, as Palestinian rocket salvoes hit coastal Tel Aviv, beach-goers in Israel’s second most populous city were seen running for shelter, some taking cover by lying down on the floor against walls.

Biden expressed ‘strong support’ for Israel’s strikes in Gaza in retaliation for Hamas missile attacks on its territory, but raised concerns about civilian casualties and the protection of journalists in his call with Netanyahu.

The White House said Biden on Saturday also shared his ‘grave concern’ about intercommunal violence within Israel and escalating tensions in the West Bank. Biden and Netanyahu also discussed Jerusalem, with Biden saying it should ‘be a place of peaceful coexistence for people of all faiths and backgrounds.’

Hamas began its rocket assault on Monday after weeks of tensions over a court case to evict several Palestinian families in East Jerusalem, and in retaliation for Israeli police clashes with Palestinians near the city’s Al-Aqsa Mosque, Islam’s third holiest site, during the Muslim holy month of Ramadan.

Speaking to crowds of protesters in the Qatari capital of Doha, Hamas chief Ismail Haniyeh said on Saturday the fighting was primarily about Jerusalem.

‘The Zionists thought … they could demolish Al-Aqsa mosque. They thought they could displace our people in Sheikh Jarrah,’ said Haniyeh.

Hamas, Islamic Jihad and other militant groups have fired around 2,300 rockets from Gaza since Monday, the Israeli military said on Saturday. It said about 1,000 were intercepted by missile defences and 380 fell into the Gaza Strip.

Israel has launched more than 1,000 air and artillery strikes into the densely populated coastal strip, saying they were aimed at Hamas and other militant targets.

The bombardments have sent columns of smoke above Gaza City and lit up the enclave’s night sky.