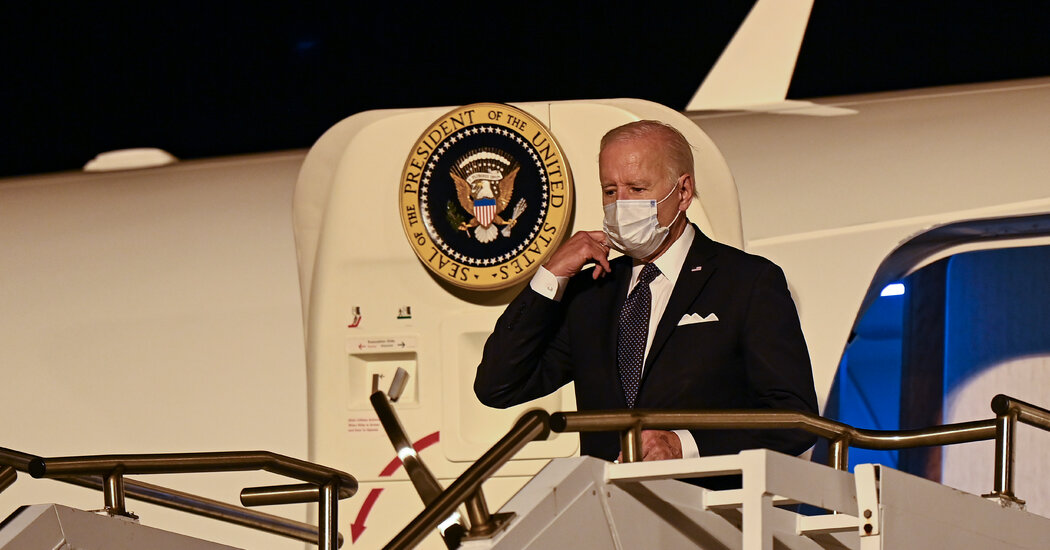 WASHINGTON — President Biden is scheduled to arrive in Los Angeles on Wednesday to host a three-day summit meeting of Latin American leaders, where he hopes to demonstrate his ability to confront the economic and migration issues that fuel the region’s most serious challenges.

Even before his first meeting, the president is the subject of a boycott by some of the most important heads of state, who have refused to attend because Mr. Biden excluded several dictators in the region. His agenda for the meeting — which includes a series of lofty-sounding announcements — is being met with deep skepticism.

And a caravan of thousands of migrants is making its way north through Mexico in the hopes of crossing into the United States while Mr. Biden is in California, a small but visible reminder of the problems at the border that have plagued his presidency.

Mr. Biden is left facing the unlikely prospect of making serious diplomatic progress at a time when many of his counterparts doubt the United States’ commitment in the region.

“I don’t think this summit was well timed or is destined for great things,” said Andrés Rozental, who was the deputy foreign minister of Mexico for six years. “I don’t hold an enormous amount of hope for any major breakthroughs. People will be skeptical, and then they’ll have to wait and see if anything comes out of it.”

During his presidential campaign, Mr. Biden made no secret of his desire to reorient U.S. foreign policy toward Asia, with a focus on China’s emerging influence. Since taking office, he has been focused on Russia’s invasion of Ukraine, spending months building coalitions among European countries.

Mr. Biden remains determined not to ignore the nations south of the United States, administration officials said, particularly the economic devastation in some areas that is destabilizing the region and undermining trade.

The centerpiece of the president’s announcements this week will be the creation of what his administration is calling the Americas Partnership for Economic Prosperity, which is meant to help countries recover from the coronavirus pandemic and longer-term economic challenges.

Administration officials said that Mr. Biden would propose reforms to the Inter-American Development Bank to encourage more private investment in the region and investments of $300 million by the United States to combat food insecurity. On Tuesday, Vice President Kamala Harris announced pledges of $1.9 billion in investments by private companies over the next several years.

But it is not clear that the investments will be robust enough to prevent those countries from turning to China for help, a key goal for Mr. Biden.

“He can hardly cover infrastructure needs here,” Mr. Rozental said. “Build Back Better has fallen pretty much by the wayside. There just isn’t anything in the cards that would indicate to me that Biden is going to come up with some sort of a big New Deal for Latin America.”

For Ms. Harris, whom Mr. Biden assigned to work on addressing the causes of illegal immigration, the summit meeting might have been a chance to demonstrate her effectiveness. After meeting this year with President Xiomara Castro of Honduras, Ms. Harris said she was optimistic about the relationships she was building with leaders in the region.

But neither Ms. Castro nor the leaders of El Salvador, Guatemala or Mexico are attending the summit, undermining the vice president’s assessment of their close relationships. The snubs came after nearly a month of closed-door attempts by the United States aimed at ensuring their participation.

Mr. Biden’s insistence that the leaders of Cuba, Nicaragua and Venezuela not attend the summit was seen in many capitals as a sign of U.S. imperialism and an unwillingness to address in an honest way the complex issues in the region.

The three Central American nations known as the Northern Triangle — El Salvador, Guatemala and Honduras — which along with Mexico are the source of about 66 percent of the illegal migration at the U.S. border, decided to send their foreign ministers to the summit as a signal of their displeasure.

President Andrés Manuel López Obrador of Mexico accused Mr. Biden and Ms. Harris on Monday of embracing the “politics of old, of interventionism, of a lack of respect.”

White House officials tried to minimize the effect of the leaders’ absences, saying that the four countries were sending high-level delegations to the summit and would be signing onto joint announcements at the end of the meetings.

“The U.S. remains the most powerful force in driving hemispheric actions to address core challenges facing the people of the Americas: inequality, health, climate and food security,” Karine Jean-Pierre, the White House press secretary, said on Monday. “And so the president continues to be a leader in the hemisphere.”

But the absences underscored the reality that the United States has struggled for decades to provide aid that is effective in helping the nations to its south.

Billions of dollars have flowed into Central and South America over the years, some of it overseen by Mr. Biden when he was vice president and appointed by President Barack Obama to develop the Alliance for Prosperity. In 2015, that program sent $750 million to the Northern Triangle countries with the goal of providing economic stability to dissuade people from migrating north.

Yet corruption in those countries remains rampant, some economies have flatlined after the upheaval from the pandemic, and civil societies are still torn up. Interviews with people in Central America show a lack of confidence that more money is the solution for those devastated by economic collapse, natural disasters and political instability.

The lack of progress over the years is especially true when it comes to preventing migrants from heading north.

That issue has been particularly difficult for Mr. Biden, who came into office promising a more humane system at the border after President Donald J. Trump’s aggressive efforts to turn away migrants. Instead, Mr. Biden has relied on some of Mr. Trump’s measures to keep asylum seekers out of the United States, citing the coronavirus pandemic.

Biden administration officials are bracing for another surge of migrants trying to illegally cross the border this summer if legal challenges successfully force the government to remove pandemic-related restrictions. Advocates for migrants have urged the United States and other countries to do more.

“The broader international community has largely failed to respond to the crises in Latin America comprehensively and holistically,” Meghan López, the regional vice president for Latin America at the International Rescue Committee, said in a statement the day before Mr. Biden was set to depart for Los Angeles.

“These communities have shouldered the response despite dealing with pre-existing challenges and receiving insufficient support from a small group of donor countries (primarily the U.S.) and institutions,” she said.

The potential arrival of a caravan of migrants during Mr. Biden’s summit meeting could add an opportunity for his critics to attack his handling of the border. Encouraged by Mr. Trump while he was in office, Republicans have in recent years sought to use caravans to inspire fear by falsely describing migrants as gangs and criminals.

In fact, most of the groups are families — including children — fleeing violence and economic migrants eager for jobs in the United States. Many break apart well before reaching the border.

But their presence as Mr. Biden hopes to demonstrate leadership in the region is a reminder of how intractable the issue of migration can be, especially amid economic and political uncertainty.

Asked on Tuesday about the summit, Ms. Jean-Pierre said Mr. Biden was “looking forward to” hosting the gathering.