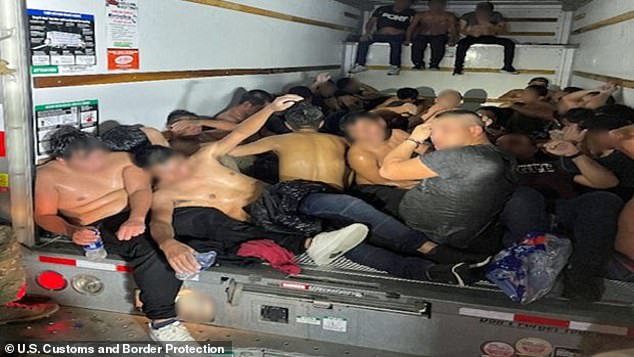 A group of migrants were saved from dying after U.S. Border Patrol agents found them locked inside the cargo area of a truck that was stationed at a parking lot in western Texas.

Agents assigned to the Big Bend Sector received an anonymous tip about a human smuggling incident involving a U-Haul truck and a Dodge Journey next to a McDonald’s restaurant in the border town of Van Horn on the evening of June 10.

The majority of the individuals were spotted sitting next to each other while three others were found sitting atop a metal structure.

A group of migrants were saved from dying after U.S. Border Patrol agents found them locked inside the cargo area of a truck that was stationed at a parking lot in western Texas. 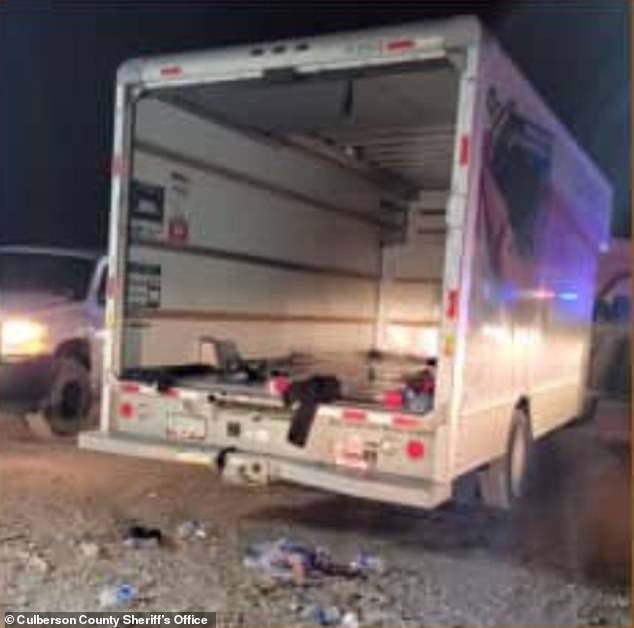 At total 33 migrants were saved from dying after U.S. Border Patrol agents found them locked inside the cargo area of a truck that was stationed at a parking lot in western Texas on June 11. CBP said 12 migrants were taken to area hospitals and treated for heat exhaustion

At least 12 of the migrants were taken to area hospitals due to heat exhaustion. The others received treatment for dehydration.

CBP said that the migrants ‘were close to perishing due to the excessive heat and lack of fresh air in temperatures still hovering near 100 degrees.’

All of the migrants, along with those who were discharged after recovering from their heat-related illnesses, were processed for unlawful entry into the United States.

A CBP spokesperson told DailyMail.com that the U-Haul driver and the SUV driver were taken into custody. It’s not clear what the nationalities of the migrants were, they said.

‘Had our heroic agents not been able to free these trapped undocumented migrants, we could have seen 33 miserable deaths in this event,’ Big Bend Sector Chief Patrol Agent Sean L. McGoffin said in a statement.

‘Smugglers do not care what type of misery they put people through as they take their money.’ 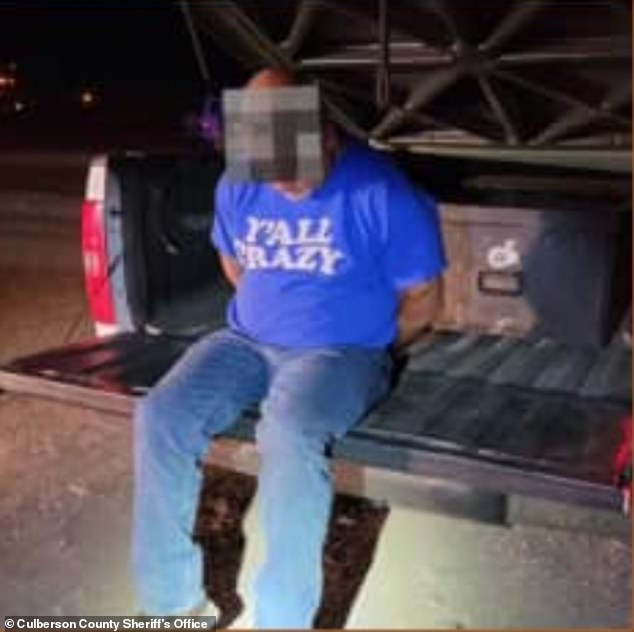 Pictured is one of the two drivers who were arrested at  a McDonald’s parking lot in Van Horn, Texas, after Border Patrol agents from the Big Bend Sector foiled a human smuggling incident and rescued 33 migrants from a locked U-Haul truck on June 10

In a separate incident, U.S. Border Patrol agents assigned to the Laredo Sector stopped a U-Haul truck in Laredo, Texas, and rescued 27 undocumented migrants who were locked inside the vehicle’s cargo area. 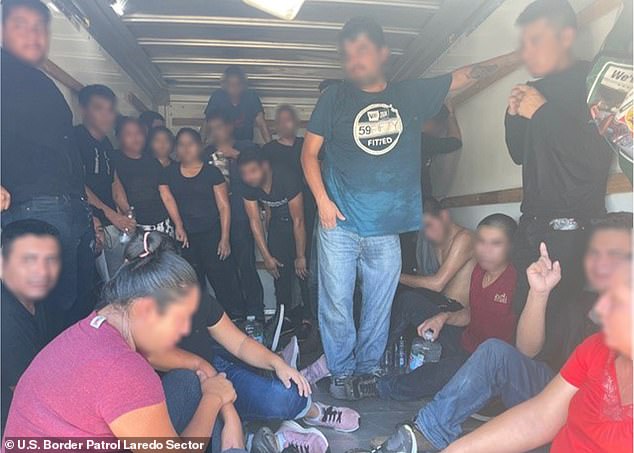 According to U.S. Customs and Border Protection, agents from the U.S. Border Patrol Laredo Sector stopped a U-Hail truck Sunday and detained 27 migrants from Honduras, Guatemala and Mexico who were allegedly being smuggled by a driver and passenger, both U.S. citizens 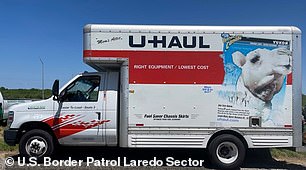 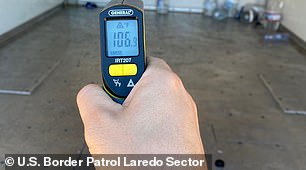 The truck (left) was stopped on Interstate 35 in Laredo, Texas, on Sunday as part of an immigration checkpoint conducted by agents assigned to the U.S. Border Patrol Laredo Sector. A Border Patrol agent’s thermometer registers the temperature inside the truck’s cargo area where 27 migrants were hidden

The latest monthly report released by CBP showed that Border Patrol agents stopped 180,034 migrants in May along the southwestern border, a slight increase from 178,854 the prior month, with the increase driven largely by single adults.

From March to May more than 530,000 people were apprehended and pushed back into Mexico after attempting to cross without legal immigration papers, according to the Customs and Border Protection.

There is no official estimate on how many did get through, but the sheer number of attempts suggests a rise in successful crossings, CBP officers have said.

Encounters with unlawful border crossers at the United State-Mexico international were at a low of 17,106 in April 2020 and unraveled up during former President Donald Trump’s last eight full months in office. The numbers of encounters at the southwestern border increased during President Biden’s first four months at the White House.

This chart shows how 2021 border crossings – pictured in blue – rocketed on crossings made in 2020, represented by the brown line (2018 is pictured in gray, with 2019 in orange) 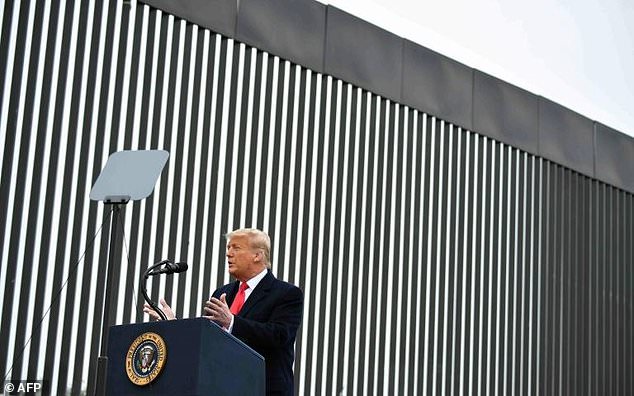 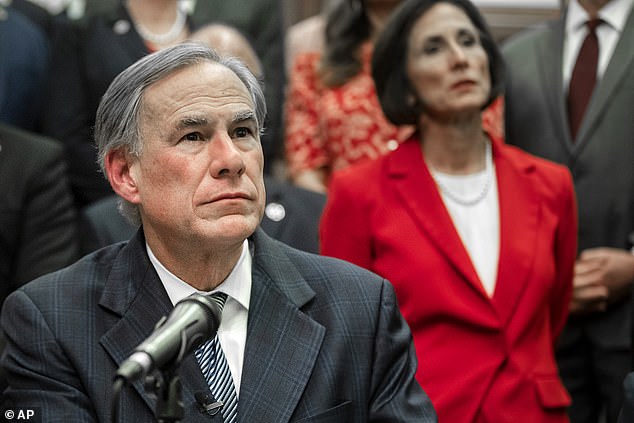 Texas Republican Governor Greg Abbott, who has been critical of the way the Biden administration has responded to the growing number of migrants crossing the U.S.-Mexico border, announced Wednesday plans to use $250 million in state money and crowdsourced financing to build more barriers along borderline.

Texas Republican Governor Greg Abbott, who has been critical of the way the Biden administration has responded to the growing number of migrants crossing the U.S.-Mexico border, announced Wednesday plans to use $250 million in state money and crowdsourced financing to build more barriers along borderline.

However, questions remain over how far Abbott can go for a project whose total cost, length and timeline are unclear and could face legal challenges from the federal government.

The governor was a fierce supporter of Trump’s failed campaign promise to stop undocumented migrants from illegally entering the U.S. by building a wall along the 1,954-mile long border. A total of 1,200 miles of the border stretched out across Texas.

‘In response to the federal government’s neglect of all of the people who live along the border, the people who are facing the consequences of the spread of drugs like fentanyl, Texas is stepping up and doing more than any other state ever has done to respond to these challenges along the border,’ Abbott said during a virtual press conference. ‘Texas taxpayers are having to step up so we as a state can protect our citizens.’

Trump on Tuesday said he will be joining Abbott on a trip to the U.S.-Mexico border June 30.

‘The Biden administration inherited from me the strongest, safest, and most secure border in US history and in mere weeks they turned it into the single worst border crisis in US history,’ he said.

‘We went from having border security that was the envy of the world to a lawless border that is now pitied around the world.’