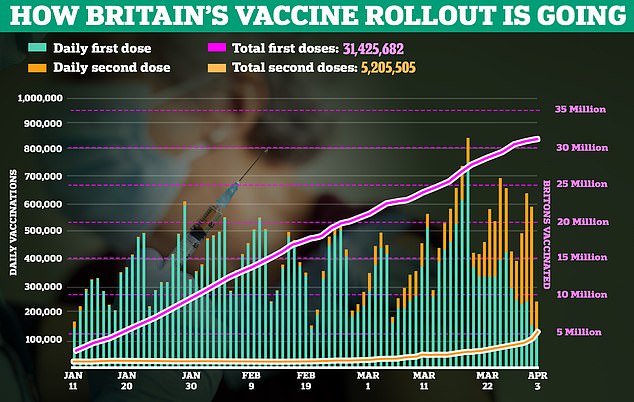 Boris Johnson has welcomed another vaccine milestone as more than five million Britons have received their second dose of a coronavirus vaccine.

The total number of people given one jab is now at 31.4million, while the figure for second doses stands at 5,205,505.

Mr Johnson today tweeted: ‘We’ve reached another milestone in our vaccination programme with over 5 million people now having had their second jab.

‘I urge everyone to take up their second dose as soon as they are offered it.’

Second doses are being prioritised in April amid a warning that vaccine supplies will fall. 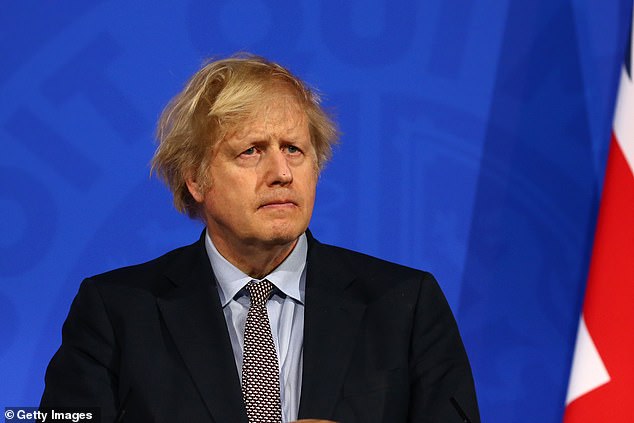 The total number of people given one jab is now at 31.4million, while the figure for second doses stands at 5,205,505. Pictured, Boris Johnson welcomed the milestone

But the government has said it is still on course to offer all adults in the UK a first jab by the end of July.

Health Secretary Matt Hancock tweeted: ‘I’m delighted that 50% of over-80s have now had their second jab.

‘Thank you to everyone involved in rolling-out the vaccine across the whole UK.’

Vaccines Minister Nadhim Zahawi added: ‘5.2m second doses, our focus is making sure the most vulnerable groups 1-9 get their second doses. That is 99% of mortality.’ 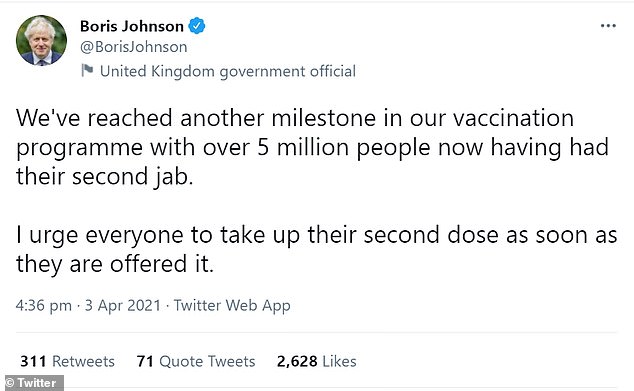 Mr Johnson today tweeted: ‘We’ve reached another milestone in our vaccination programme with over 5 million people now having had their second jab’

It comes after it was revealed the Prime Minister will give the green light on Monday to the development of a system of ‘vaccine certification’ as he looks to reinvigorate the economy.

Ministers believe the scheme may be essential in reopening venues such as theatres and stadiums which rely on large crowds.

But the idea of creating a new ‘Checkpoint Britain’ has led to a fierce cross-party backlash, with 72 MPs signing a pledge to oppose the ‘divisive and discriminatory’ scheme.

There was also a huge outcry over the plans, with a litany of critics branding the idea as oppressive. 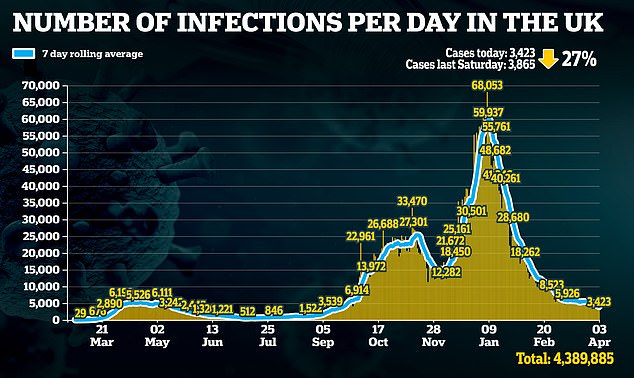 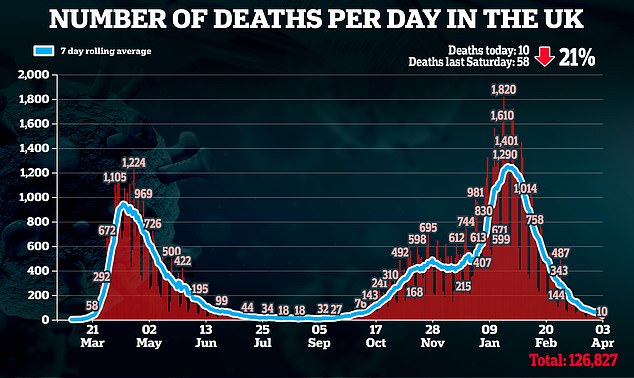 The policy was even criticised by a Government adviser, with Professor Robert West warning they would give people a false sense of security.

The scale of the opposition presents a potential major problem for Mr Johnson if the plans require primary legislation to enact them.

A Whitehall source told the Mail ministers would try to win round furious Tory MPs by reassuring them that any new passport scheme would be temporary.

While no decision has been taken on how long any scheme should last, the source said it was likely to be no more than a year.

‘It will be time-limited and I think the duration of the scheme will be measured in months,’ the source said.

‘The party will not wear any longer.’

Culture Secretary Oliver Dowden defended the idea of so-called ‘Covid status certification’, saying it could help people get back to ‘doing the things they love’, such as going to the theatre or attending live concerts and sports events.

Ministers are hoping to pilot the use of vaccine passports at major events within weeks, with the FA Cup final and the World Snooker Championship among those being considered for trials.

Mr Dowden stressed that vaccine status is only one element of the scheme, with people also able to show a negative Covid test or prove they have already had the virus to gain entry.

He told the BBC: ‘This is not about a vaccine passport, this is about looking at ways of proving that you are Covid secure, whether you have had a test or had the vaccine. Clearly, no decisions have been made on that, because we have to weigh up different factors, the ethical considerations and so on, but it may be a way of ensuring we can get more people back doing the things they love.’

Families face paying £600 for tests to go on foreign holidays: Traffic light system will require at least £150 per person extra – even if the destination is on the ‘green list’ – but fully vaccinated people won’t need ANY tests

Families face having to fork out hundreds of pounds for Covid tests to go on foreign holidays this summer, even if travel bans on some countries are lifted – but new plans would allow fully vaccinated Britons to avoid tests, it has been claimed.

Under the Government’s traffic light system, each traveller will have to take at least two tests on holidays to low-risk ‘green’ destinations, potentially costing at least £600 per family.

One would be taken 72 hours before boarding a UK-bound flight with another two days after arrival. The latter would be for detecting whether travellers have picked up any mutant strains while abroad.

It was claimed that people who have had two doses of the vaccine could avoid quarantining when returning from a medium-risk ‘amber’ country.

Those who are fully vaccinated may only have to have one test upon arriving back in the UK, the Daily Telegraph reported, compared with multiple tests and a ten-day quarantine for the unvaccinated. It was also claimed that vaccinated holidaymakers could return to the UK from a green list county without having to do a test.

A government source said: ‘For amber countries, you would remove home quarantine. The debate is whether there will be any testing required instead of quarantine.’

There could be as few as 12 countries on the government ‘green list’ for quarantine-free travel initially, with more travel options potentially delayed until July or August.

Hesitancy towards the vaccine across parts of mainland Europe may mean that traditionally favoured continental destinations among British holidaymakers are deemed more high-risk than the likes of the US and Israel, where vaccination rates are good.

Plans under consideration by the Government’s global travel taskforce could mean holidaymakers who have been fully vaccinated will be able to return from ‘green list’ countries back to Britain without any tests on arrival, as long as they have negative results from a test taken before they left.

Those who have not been vaccinated would require another test when they get back to the UK.

Fully vaccinated travellers from countries on the ‘amber list’ might need just one further test upon arrival, and avoiding the 10-day home quarantine.

But those who have not been vaccinated would still need to self-isolate for 10 days, being tested on days two and eight.

Travel bans will be in force for ‘red list countries’, and Britons who return from them will have to quarantine in hotels, costing up to £1,750 per person, also being tested on days two and eight.