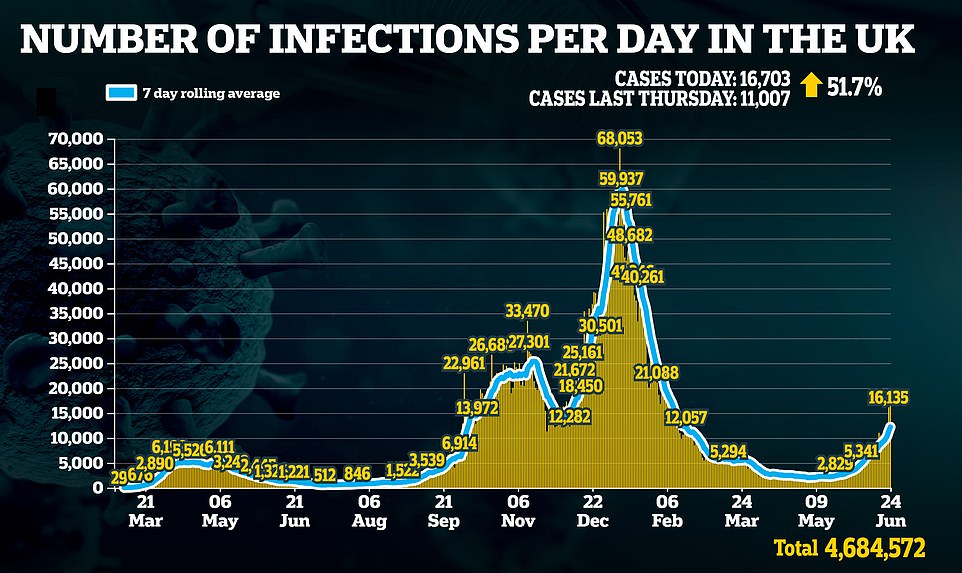 Britain today recorded another four-month high in Covid cases for the third day in a row, despite signs that the outbreak may be slowing down.

But the spike in infections has been mainly fuelled by a huge up-tick in cases in Scotland, fuelled by a massive testing blitz to flush out cases of the Delta variant.

Separate data actually shows the speed of growth is slowing down in most regions of the UK, in a positive sign that the crisis is no longer spiralling out of control.

However, despite promising signs that the third wave is already heading in the right direction, some scientists believe Euro 2020 has helped to fuel an increase in cases.

Two-thirds of new infections in the 15 to 44 age range are now men, data from the Scottish Government’s own Covid dashboard show, which has led experts to believe the rise is linked closely to friends meeting indoors to watch the football tournament.

Others have suggested the thousands of Tartan Army fans who travelled to England to watch the crunch Euro tie against the Auld Enemy at Wembley may have brought the disease back with them. 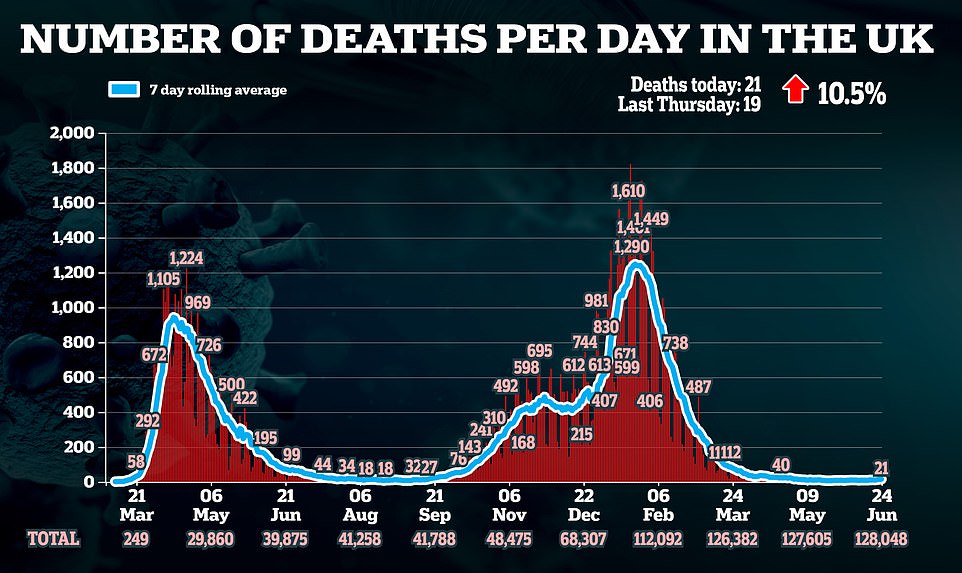 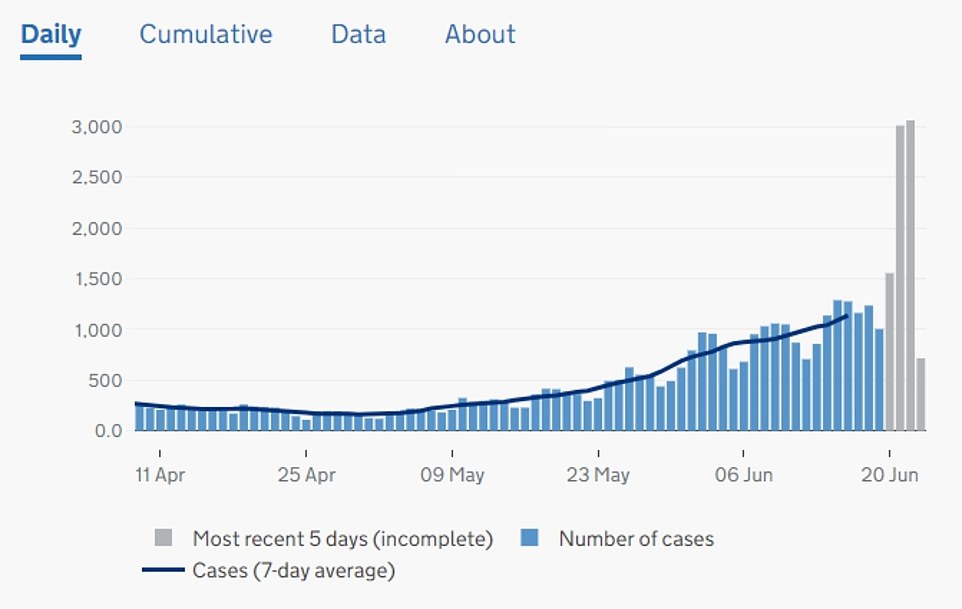 There were nearly 3,000 new Covid infections in Scotland in the past 24 hours, the largest toll ever in a single day. The figure, up slightly on yesterday’s tally, is more than twice as high as the number Scotland was recording earlier in the week 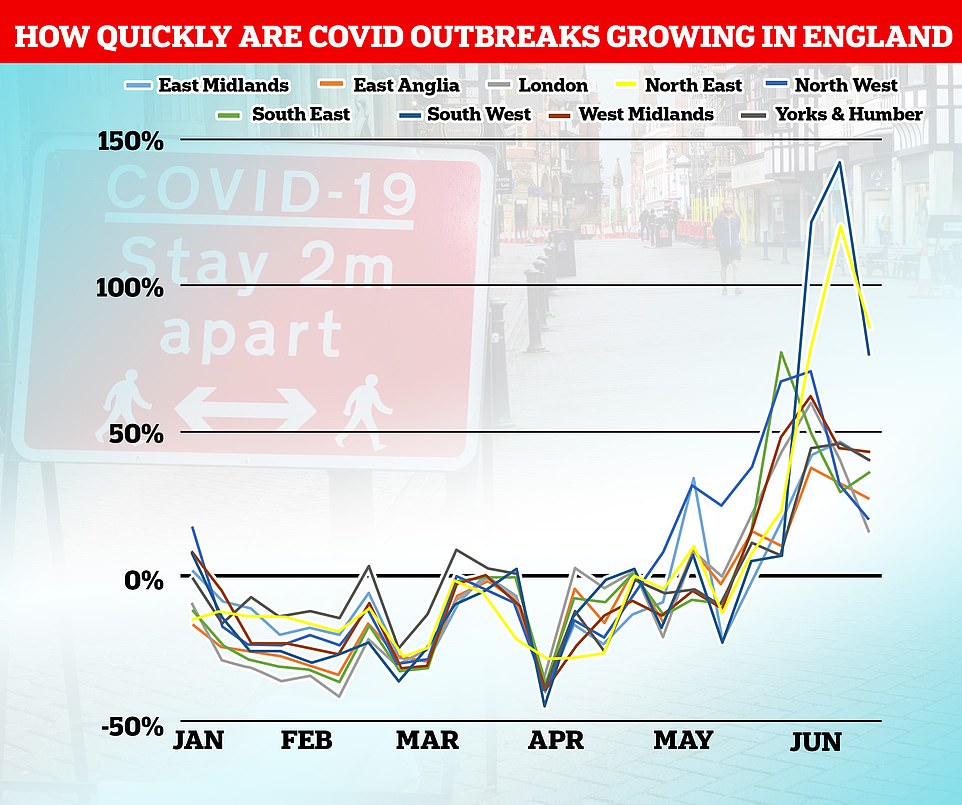 Separate data actually shows the speed of growth is slowing down in most regions of the UK, in a positive sign that the crisis is no longer spiralling out of control. Data from PHE shows how the week-on-week growth rate in Covid cases has changed in the different regions of England since January 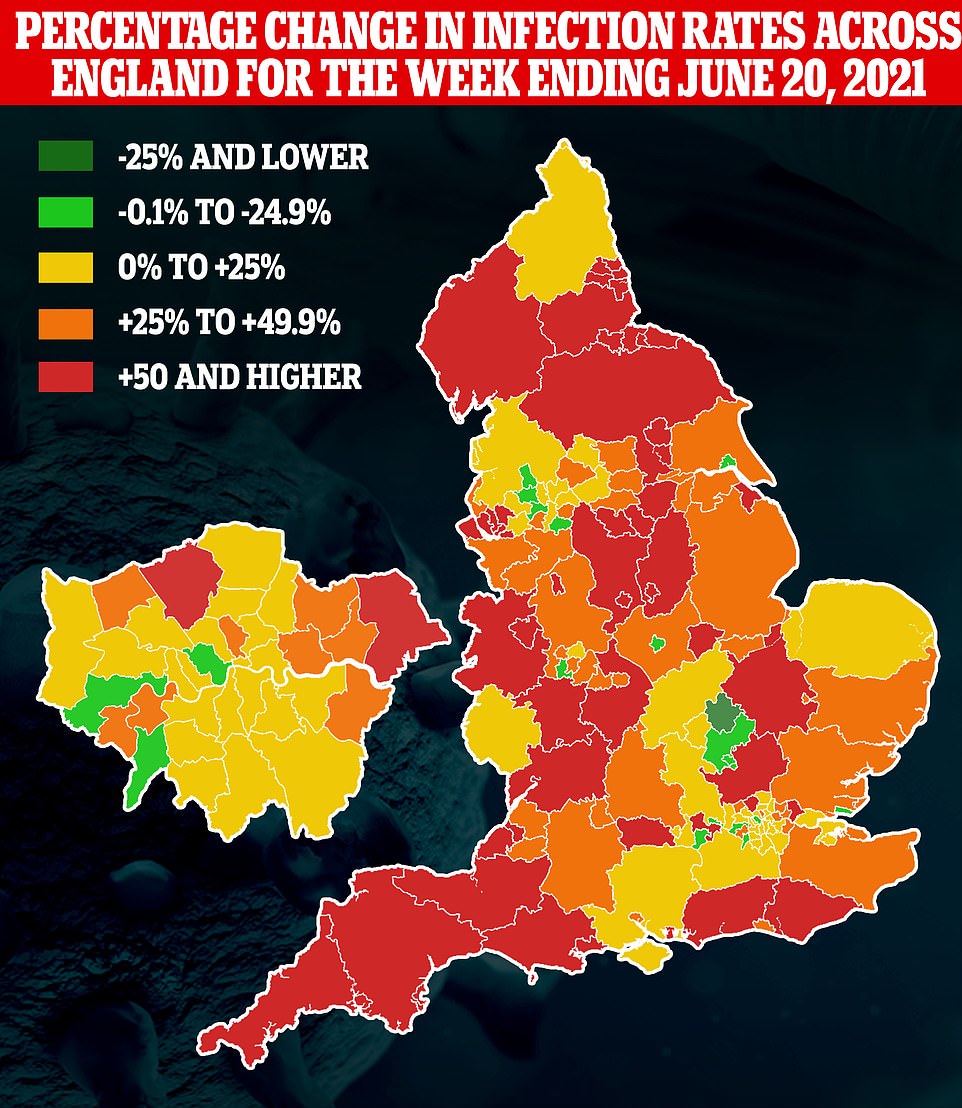 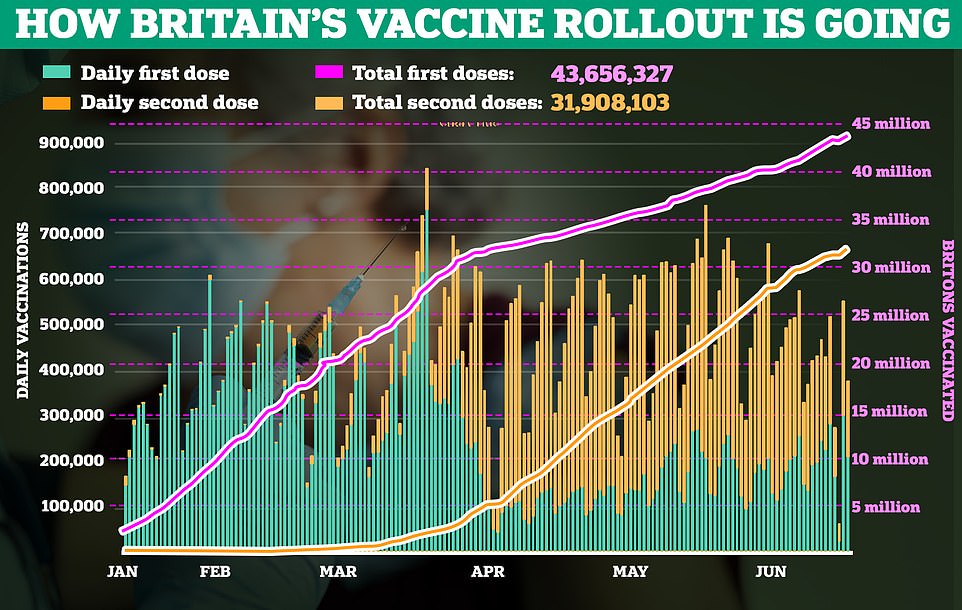 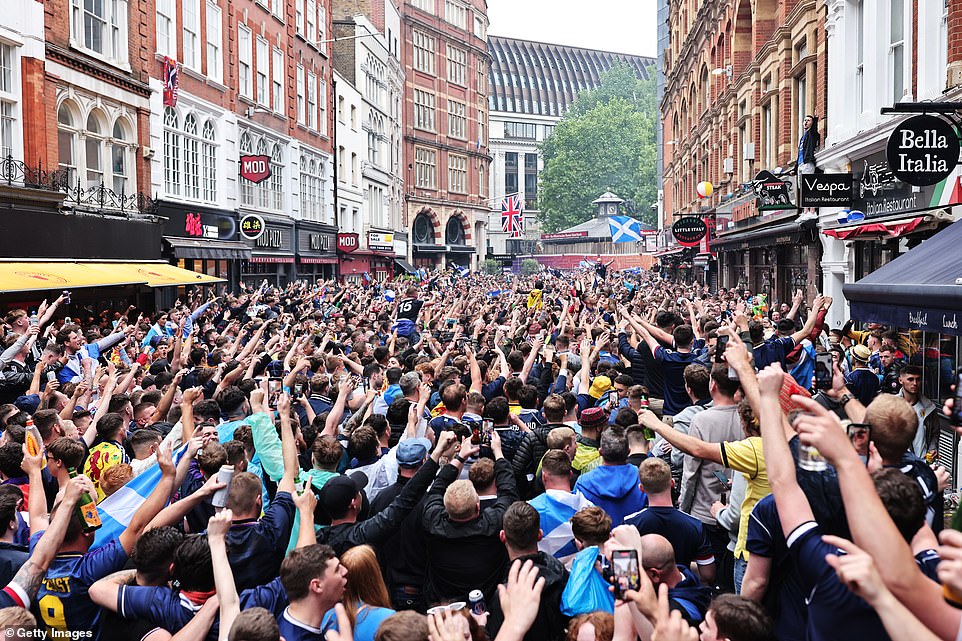 What social distancing? There was little room for space in Leicester Square as Scotland fans took over the capital’s famous West End ahead of their crunch tie against England last Friday

Scotland reported 2,999 new coronavirus cases today, making it the highest total ever in a single day. It was up slightly on the 2,969 recorded yesterday and double the number on Tuesday. Scientists say the rise may be partly because of tens of thousands of fans travelled to England to watch the crunch Euro 2020 tie

Officials say the spike in cases is a result of a mass testing blitz in Scotland to snuff out the Indian variant. Despite the scaling up of swabs, roughly 8 per cent of tests came back positive in the last 24 hours, which was in line with the rise since the start of June 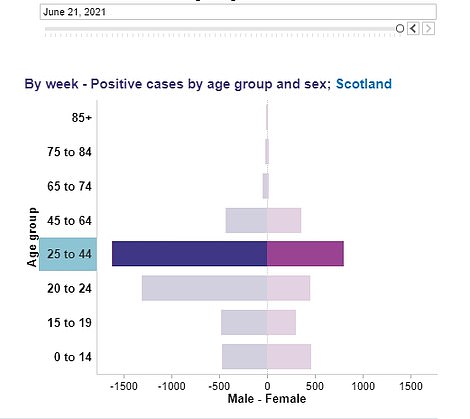 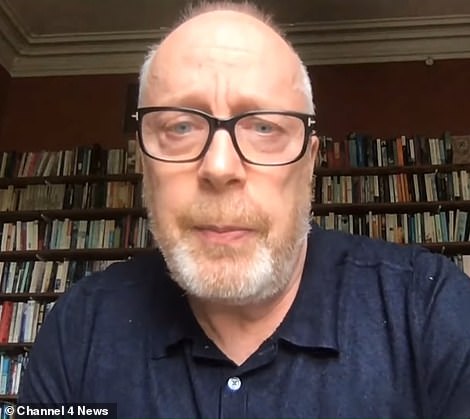 Two-thirds of infections in the 15 to 44 age range are now men, which has led experts like Professor Stephen Reicher (right) to believe the rise is linked closely to Euro 2020 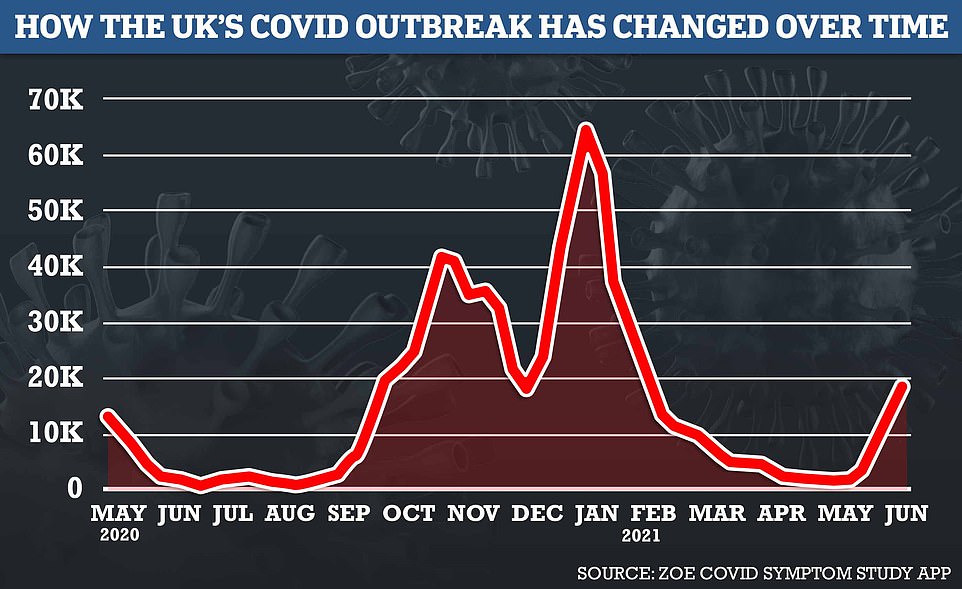 The UK is now recording 19,122 cases each day, which equates to 1 in 264 people, according to the ZOE Covid symptom study. The data shows that around 15,099 of these cases are in unvaccinated people, while 4,023 are in people who have had the vaccine 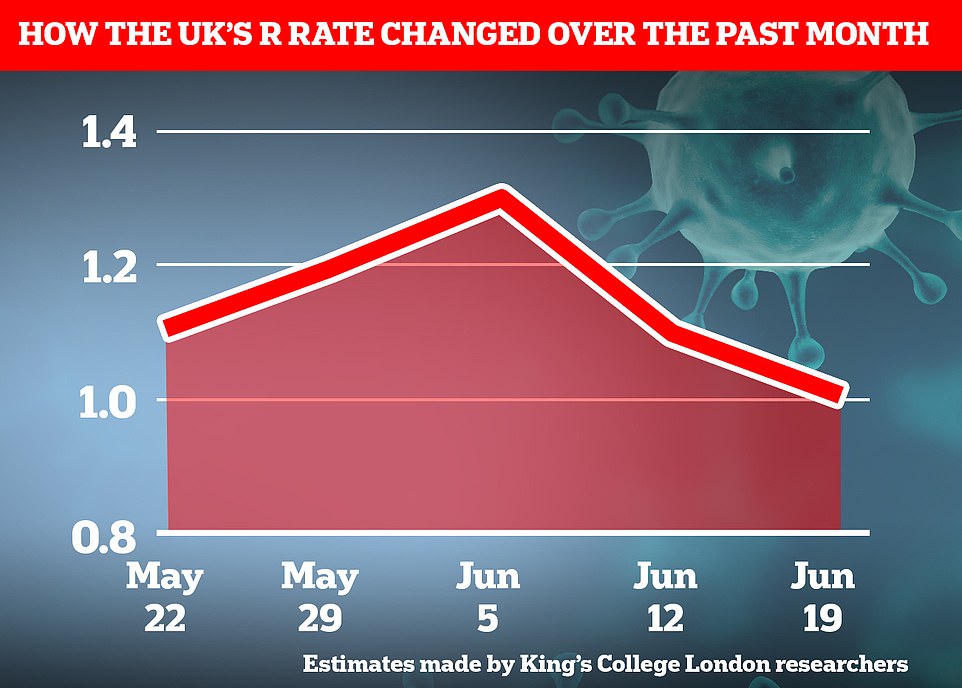 Professor Spector and his team believe the UK’s R rate has fallen to 1.1 in the past week, down from 1.2 – the lowest it has been since the third wave started in April

The researchers estimate that there are currently 15,099 new symptomatic cases of Covid in unvaccinated people in the UK, compared to 4,023 in vaccinated. This gives a total of 19,122 new cases every day 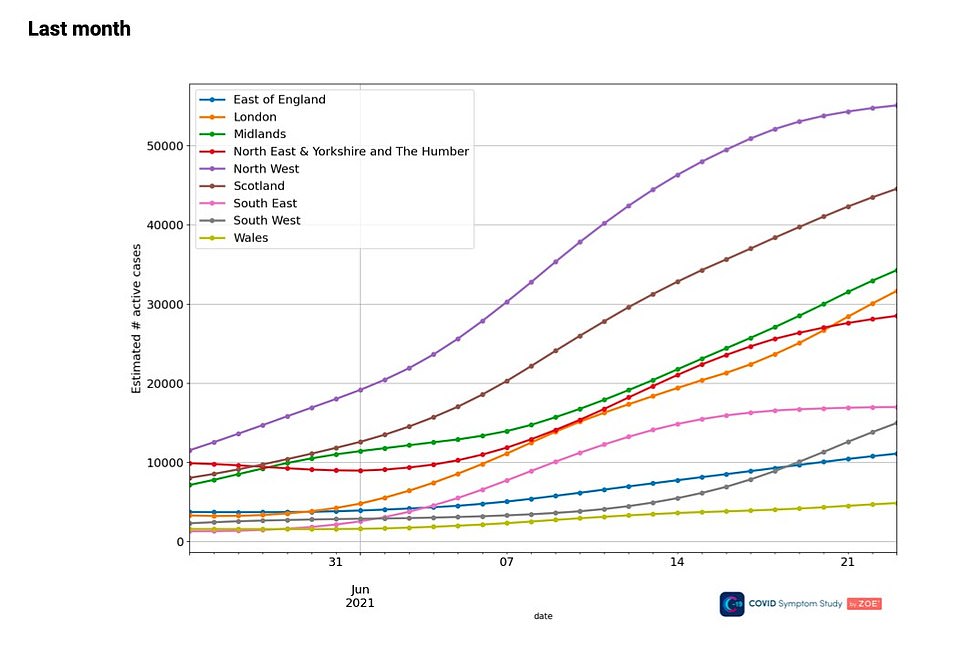 Data from the ZOE study shows that cases are continuing to rise across the country, but the number of new cases in Scotland (brown line) and the North West (purple line) show that cases are beginning to even out 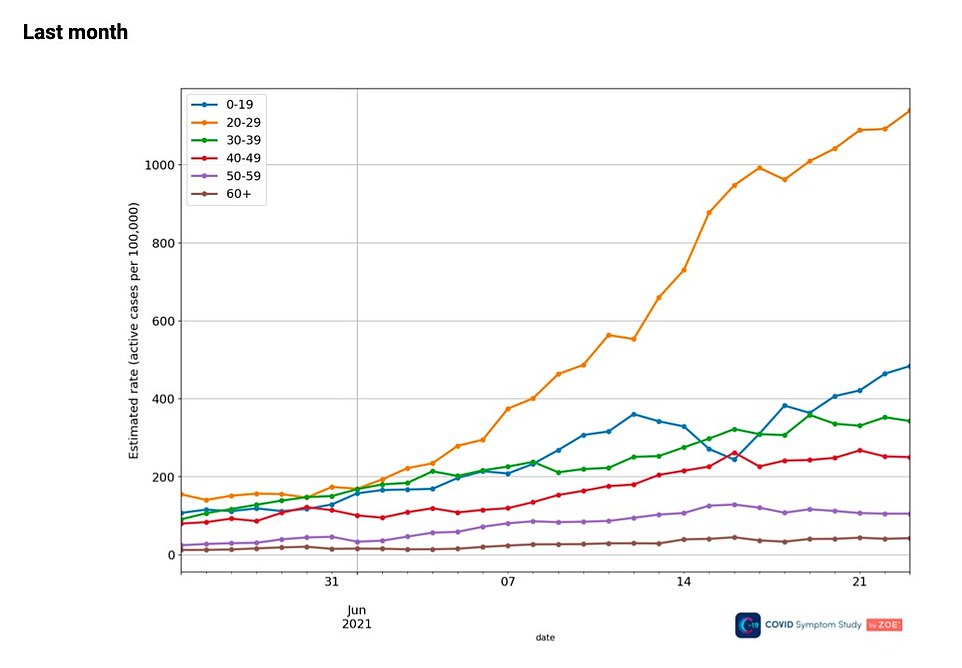 There were nearly 3,000 new Covid infections in Scotland in the past 24 hours, the largest toll ever in a single day. The figure, up slightly on yesterday’s tally, is more than twice as high as the number Scotland was recording earlier in the week.

The rapid rise in cases has been blamed by officials in England and Scotland on a massive testing blitz, and not a sudden outbreak. However, there has been a steady increase in infections north of the border since the start of June, which was already speeding up before the mass swabbing scheme.

Professor Reicher, a behavioural psychologist at the University of St Andrews, told the BBC’s Good Morning Scotland programme: ‘A few weeks ago it was about 50:50, men and women got infected at the same rate.

‘Yesterday the data showed that young men – men under 45 – were about three times more likely to get infected.

‘We can’t be sure why that is, but the obvious explanation is that people were getting together for the football and not taking precautions.

Edinburgh University’s Professor Linda Bauld said it was still too early to say football fans were definitely behind the rise, but she admitted there was a ‘trend’.

The public health expert added that men were ‘more likely to take risks’ and engage in behaviours that could fuel the spread of the disease.

Scotland reported 2,999 new coronavirus cases today, making it the highest total ever in a single day. It was up slightly on the 2,969 recorded yesterday and more than double the number on Monday. 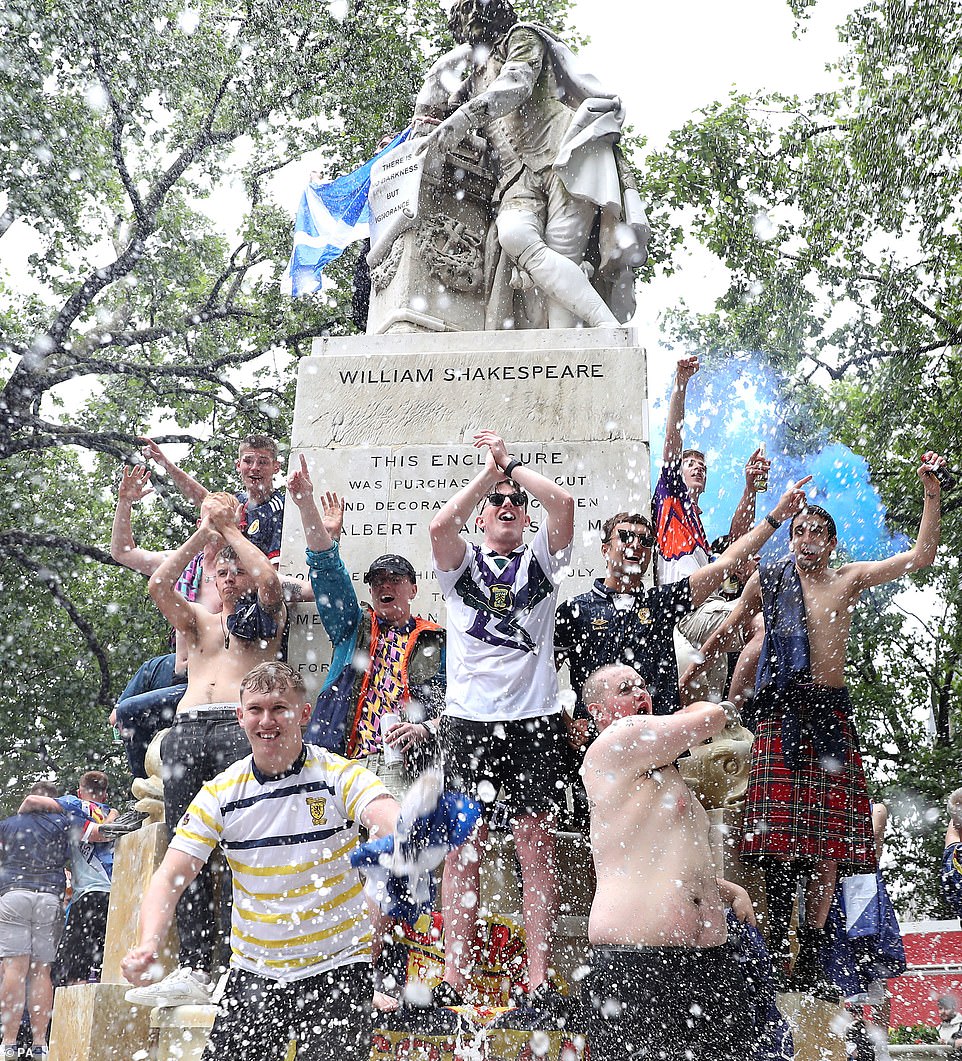 Fans seized the opportunity to jump into the fountain in Leicester Square and take off their shirts as they sprayed water over each other. Footage from after the game showed members of the Tartan Army chanting at the statue: ‘You’re just a s**** Rabbie Burns’, in reference to the Scottish poet Robert Burns 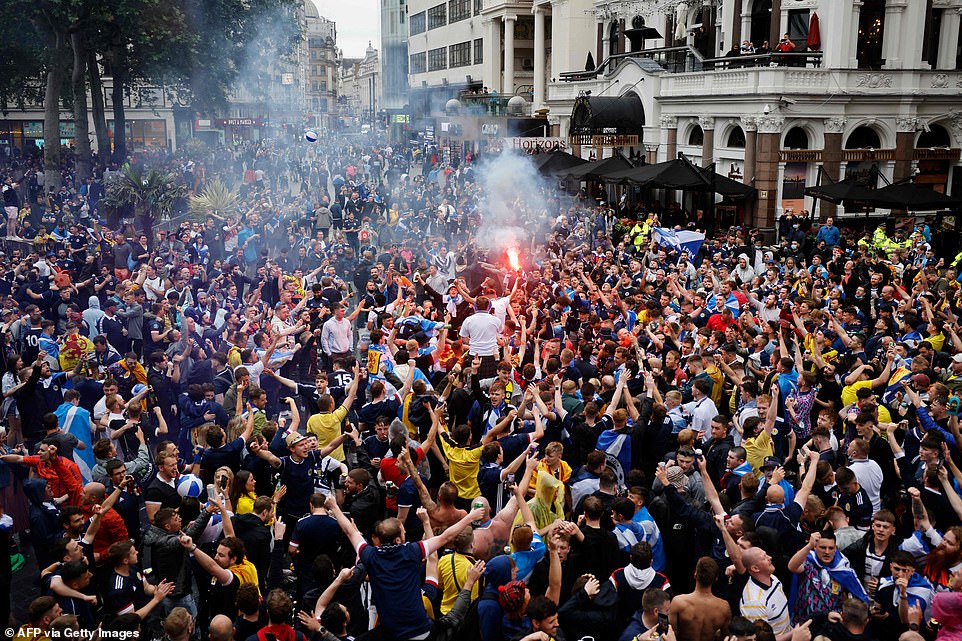 There were wild scenes of jubilation throughout the day. Euro 2020 was the first major competition the Scottish national football team had qualified for in 23 years

Britain’s summer of LOVE: Lockdown in March 2020 led to DROP in fertility rates and did not spawn predicted baby boom

The March 2020 lockdown led to a drop in fertility rates and not the baby boom previously predicted, it has emerged.

Fertility rates in England and Wales for December 2020 and January 2021 showed ‘relatively steep decreases’ compared with a year earlier, down by 8.1% and 10.2% respectively, according to the Office for National Statistics (ONS).

Births in these months would have mostly been conceived in the weeks following the start of the lockdown.

Other studies of the under-35s have found that during the three lockdowns, a third of couples were having less sex with their partner and a quarter none at all.

However, there was a year-on-year increase in the fertility rate for March 2021 of 1.7%, which suggests that sex was very much back on the table when ‘lockdown restrictions were beginning to be eased in summer 2020’, the ONS said.

In May, a new survey revealed that four in ten Britons have not been intimate with their loved-one over the entire Covid pandemic – with most blaming working from home.

Nearly 80 per cent of married people said their partner never initiates sex and the typical adult rates their sex life at an underwhelming 2.9 out of ten – compared with 7.3 at the beginning of their relationship.

The new data released from the ONS seems to reflect a drop in sex throughout the pandemic.

Infection rates in Scotland have been rising faster than the rest of the UK due to outbreaks of the highly infectious Indian variant in the country’s central belt. But testing has been ramped up massively in an effort to contain the mutant strain.

Tests were reserved exclusively for hospital Covid patients during the initial wave of Britain’s epidemic.

Record numbers of tests are now being carried out in Scotland, with more than 40,000 tested today and yesterday.

Despite the scaling up of tests, roughly 8 per cent of them came back positive in the last 24 hours, which was in line with the rise since the start of June.

Some officials have painted the higher than usual case numbers as a good thing, claiming they were a sign that the mass testing was a success.

Dr Mary Ramsay, head of immunisation at Public Health England, said the climbing numbers were a ‘positive’ and meant officials were finding and isolating more infected people than they would have otherwise.

First Minister Nicola Sturgeon echoed the comments yesterday, but said the rise should be taken seriously if infections continue to grow unchecked.

In a positive sign, the scientist running  the UK’s largest symptom-tracking study, said the number of people falling ill with Covid in Scotland was starting to plateau.

Professor Tim Spector’s study showed there were 3,716 new symptomatic cases in Scotland every day last week, the equivalent of one in 121 people.

This is higher than last week but marks a slowdown in the speed of the outbreak north of the border.

The King’s College London study also found that case rates in the North West of England, another hotspot for the Indian ‘Delta’ variant’, were flatlining.

There were 3,984 symptomatic people testing positive every day in the region last week, which is the equivalent of around one in 131. Similar to Scotland, cases are continuing to rise in the region, but at a slower rate, according to the data.

Professor Spector and his team believe the UK’s R rate has fallen to 1.1 in the past week, down from 1.2 – the lowest it has been since the third wave started in April.

He also revealed that Covid infections are rising in Cornwall because of the thousands of Britons who have flocked to the coast for a staycation over half-term.

Latest Government figures show that 147.8 people per 100,000 tested positive for the virus in Cornwall and the Isles of Scilly in the week leading up to June 18 — up from 60.7 in the previous seven-day spell.

Professor Spector said Cornwall’s climbing infection rates may also be due to the three-day G7 summit earlier this month, which saw crowds gather to welcome the leaders of world’s richest nations.

He called for holidaymakers to stay vigilant when enjoying staycations this summer to ensure outbreaks are kept under control.