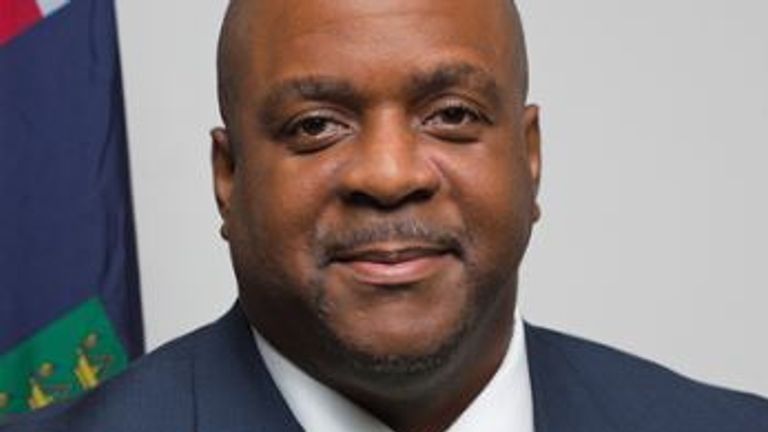 The premier of the British Virgin Islands, who is accused of money laundering and conspiring to import cocaine, will plead not guilty to drug trafficking, his lawyer has said.

Last week, Andrew Fahie was arrested in Miami, Florida, by members of the US Drug Enforcement Agency (DEA) posing as Mexican drug traffickers.

The 51-year-old was later charged with money laundering and drug trafficking crimes.

A US judge has since ruled that he can be released from custody ahead of his trial, as long as a number of conditions are met.

Miami federal court Judge Alicia Otazo-Reyes decided Fahie could remain at the rented home of his two college-age daughters in Miami – but only if he and his family surrender their travel documents, he wears an ankle monitor, and a $500,000 (£421,777) bond is paid.

Prosecutors have said they will appeal the decision, which means it is not clear when Fahie will be released.

On Monday, Fahie claimed he is immune from prosecution and he cannot be tried because he is an elected, constitutional head of government of the British overseas territory.

Meanwhile, the acting premier of the British Virgin Islands, Natalio Wheatley, confirmed he has been nominated to replace Fahie.

“I never contemplated that leadership of the British Virgin Islands would come so soon, or under these circumstances,”
Mr Wheatley said during a Facebook live.

“There is tremendous work to be done, and the fate of the British Virgin Islands hangs in the balance.”

Despite being nominated by the country’s leadership body to take over, Mr Wheatley will need to be formally appointed and await Fahie’s official resignation before he can take up his position in office.

Prior to his arrest, Fahie was already facing allegations of widespread corruption and an inquiry into widespread government fraud had been launched.

The review, which was not directly linked to the premier’s arrest or charges, found millions of dollars were spent on projects which were abandoned or found to be of no public benefit.

Governor John Rankin, who is the Queen’s representative to the islands, said the report concluded that “unless the most urgent and drastic steps are taken, the current situation with elected officials deliberately ignoring the tenets of good governance will go on indefinitely”.