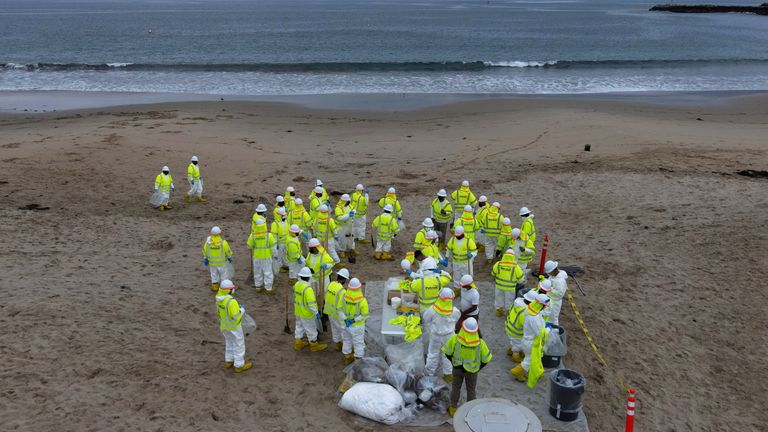 Beaches in Southern California that were closed due to a major oil spill are set to reopen after testing found no detectable amounts of associated toxins in ocean water, officials have said.

California State Parks said in a statement that city and state beaches in the city of Huntington Beach will reopen on Monday.

The Orange County cities of Huntington Beach, Newport Beach and Laguna Beach were closed by officials last week when some 527,000 litres – 3,000 barrels – of heavy crude oil spilled into the Pacific Ocean, killing wildlife and soiling the coastline.

Authorities will test the water for at least the next two weeks to monitor for toxins, according to the statement.

The US Coast Guard is investigating a vessel in Oakland, focusing on the possibility that a ship’s anchor struck a pipeline and caused the oil spill, according to US media reports.

Huntington Beach, which advertises itself as Surf City USA, is one of the rare places in Southern California where oil platforms are visible from the shore.

The impact on wildlife has also been seen at the Wetlands And Wildlife Care Center in Huntington Beach.

An oiled sanderling was among the first birds to be brought in for cleaning and treatment.

Meanwhile, dead birds and fish were strewn across the sand and rescuers were searching for other animals harmed by the oil.

The area is known as a home to threatened and endangered species including humpback whales and a bird called the snowy plover.

Booms have been floated to try to prevent the oil from reaching ecologically sensitive marshland and the wildlife that calls it home.

People who were out on the water over the weekend reported seeing pods of dolphins swimming through the sheen of oil.

The man leading the wildlife rescue operation said it was the cost of human reliance on oil.

Dr Michael Ziccardi, a veterinarian who is director of the Oiled Wildlife Care Network, said: “If there was no oil, there would be no potential impact to wildlife. But I think, based on our society right now, there is a reliance on oil.

“If we’re going to use oil, produce oil, extract oil, I think the best thing we can do is be as prepared as possible to respond to accidents such as this.”