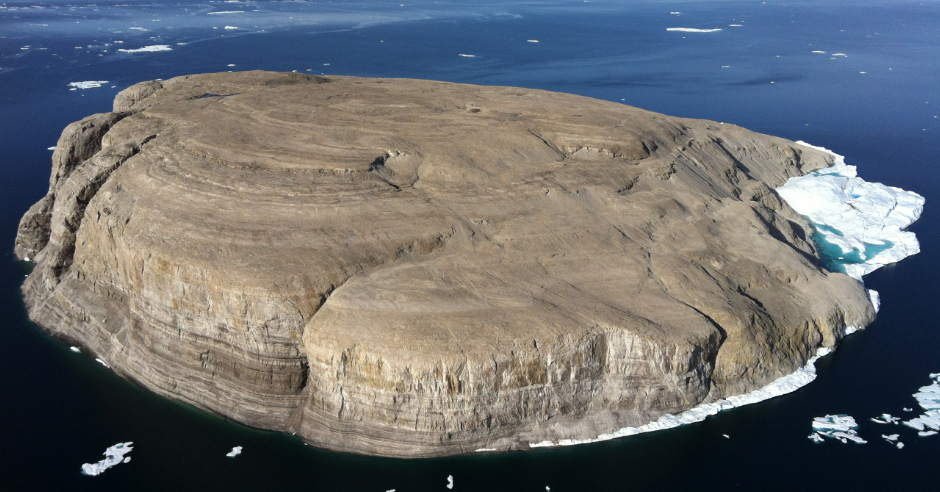 Hans Island is just a desolate, kidney shaped piece of rock in the Arctic. But for 49 years, it has been the source of a rare territorial dispute for Canada because it sits right in the middle of the international boundary between that country and Greenland, an autonomous territory of Denmark.

Over the decades the dispute between Canada and Demark has been fought in often whimsical ways.

Since Canadian troops began visiting the island in 1984 to plant maple leaf flags and leave behind bottles of Canadian whisky, Danes have been regularly dropping in to replace the Canadian items with schnapps and Danish flags. And cabinet ministers from both countries have arrived by helicopter to assert their nations’ competing claims and survey the rock they claimed to govern.

Now, an end is in sight for this long-running and largely benign diplomatic impasse.

Canada and Denmark will sign an agreement on Tuesday that formally defines their Arctic marine boundary and settles the question of Hans Island’s ownership. The island will be split with about 60 percent of the rock becoming Denmark and the rest becoming Canada.

The country’s two foreign ministers contrasted the peaceful and successful, if protracted, resolution of the dispute with the violence and turmoil of other territorial struggles, most notably Russia’s invasion of Ukraine.

“This sends a strong signal at a time when we see big powers brutally violating fundamental international law, like what his being done by Russia in Ukraine,” said Jeppe Kofod, the Danish foreign minister.

“It was the friendliest of all wars,” said Mélanie Joly, the Canadian foreign minister. “But when you look at what’s going on in the world right now, particularly since the invasion by Russia of Ukraine, we really wanted to give more momentum and renew our energies to make sure that we would find a solution.”

The fight over a meaningless piece of rock dates back to 1973, when Denmark and Canada wound up talks about boundary and underwater rights but didn’t reach an agreement over Hans Island.

Oil and gas reserves lie in the 22-mile wide Nares Strait where Hans Island sits and that separates the two countries. But Michael Byers, an international law professor at the University of British Columbia who studies Arctic sovereignty, said that the resources are too deep and the area too filled with icebergs to make offshore drilling likely.

“It would be extremely expensive oil,” Professor Byers said. “If we’re drilling for oil at those depths and at that location in 10, 20 or 30 years; we will have lost the fight against climate change.”

Some issues around fishing rights were long ago settled by other international treaties.

But Ms. Joly said that the newly settled marine boundary between Canada and Denmark, which she characterized as the longest in the world, will provide an important example to other nations as they deal with questions surrounding the Arctic seabed and the resources it contains.

The ministers said that reaching an agreement involved talks by both countries with Inuit who live on both sides of the border and who know the island as Tartupaluk. Mr. Kofod said that the agreement protects their cross border hunting and fishing rights and also ensures that the new boundary will not hinder travel across Hans Island.

Given that Canada and Denmark are longtime allies and enjoy friendly relations, why did it take so long to reach a deal?

Part of the answer, Professor Byers said, is the slow pace of the United Nations’ processes for settling marine boundary issues that are governed by the 1982 Law of the Sea Treaty.

But he also noted that highly publicized drop offs of liquor by troops from both countries have typically preceded elections, suggesting that some governments found political value in dragging out the dispute.

“It was simply a way of stirring up a little bit of patriotic sentiment in a completely no risk context,” Professor Byers said.

The agreement will mean the end of the whisky war. The two ministers will exchange bottles for the last time on Tuesday.

Baseball star Joey Votto performs ‘Griddy dance’ with young fan after she holds up sign saying ‘will you make a TikTok with me?’ | US News