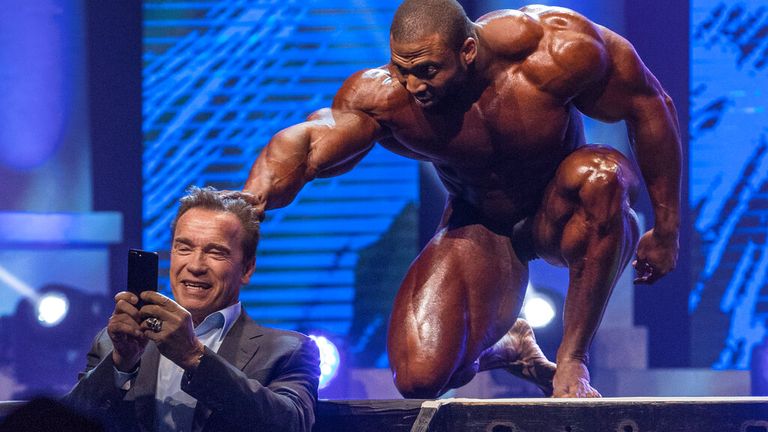 Tributes have been paid to American bodybuilding champion Cedric McMillan who has died aged 44.

His sponsor, Black Skull USA, confirmed his death on Tuesday.

The athlete’s cause of death has not yet been confirmed but reports suggest he suffered a cardiac arrest.

Black Skull USA posted on Instagram: “We regret to inform you that our friend and brother @cedricmcmillan passed away today.

“Cedric will be greatly missed as an athlete, comrade, friend and father.

“Our prayers are with all his family and friends,” the statement said, adding McMillan “fought the good fight and now he rests”.

Arnold Sports said it was “heartbroken” to learn of the bodybuilder’s death in an Instagram post, sharing pictures of McMillan meeting the former California governor.

Event organisers said McMillan would be remembered for his “larger than life personality, infectious smile, gentle heart and sense of humour that was loved by fellow competitors and fans alike”, adding that he would be “deeply missed”.

“While Cedric’s competitive accomplishments, which included multiple professional wins alongside his 2017 Arnold Classic title, made him a star in the world of bodybuilding and fitness, the career he was most proud of was his 20+ years of selfless service to his country in the United States Army, where he achieved the rank of Sergeant First Class in July of 2021.

“Above all, Cedric McMillan was a husband and a father, and we send our most heartfelt condolences to his family during this incredibly difficult time,” a statement added.

Fellow bodybuilder Victor Martinez posted on Instagram: “You were loved by so many and made many of us proud. I’m honoured to have shared the stage with you. You will be missed.”

Another sporting colleague, Kai Greene, shared a picture of himself with McMillan captioned: “Feeling uneasy with the news of your sudden departure from this dimension to the next.

“Cedric McMillan was a father, a friend, a competitor, a man of uniform, a man of many hats who always knew how to make other people laugh and make everyone around him feel like family.”