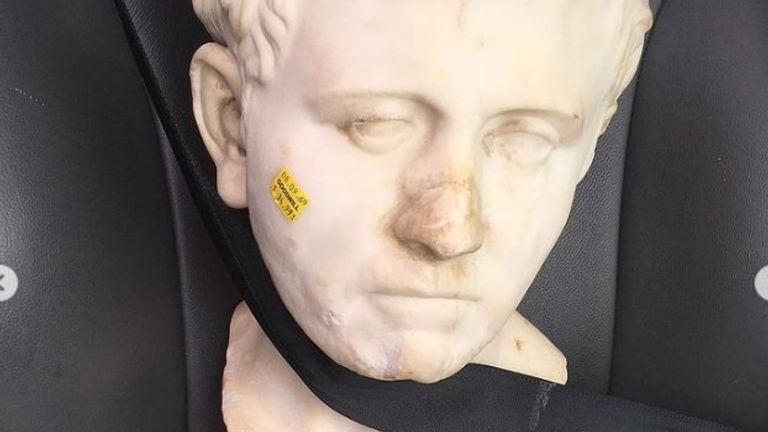 When Laura Young bought an old bust from a charity shop in Texas four years ago, she could not have known what would follow.

For just $34.99 (£28), the white marble sculpture seemed like a good deal, so she put it on the passenger seat in her car, belted it in, and drove it home.

Ms Young is an antiques dealer and regularly visits charity shops looking for treasures, but there was something about this one that seemed different.

She told the San Antonio Express-News: “He looked Roman.

“In the sunlight, it looked like something that could be very, very special.”

It turned out that the bust was from a time between the late first century BC to the early first century AD, and it had disappeared from Germany following World War Two.

Lynley McAlpine, a postdoctoral curatorial fellow and Roman art specialist at the San Antonio museum, told the Express-News that the bust is likely to be a marble portrait of Sextus Pompey.

Sextus spent his life trying to avenge the death of his father, who fought a civil war against his former ally Julius Caesar.

The elder Pompey’s army was defeated and he fled to Egypt, where he was assassinated.

Sextus also met a violent end – he was executed after fighting Marc Antony and Augustus.

The bust made its first official appearance in 1833, when it was listed in the art collection of Bavaria’s King Ludwig I.

The collection was displayed in the German town of Aschaffenburg.

In January 1944, the town was bombed by the allies, and the building housing the collection was seriously damaged.

The bust disappeared and somehow made its way to Texas, possibly brought home by a US soldier.

Stephennie Mulder, an art history professor at University of Texas in Austin, told radio station KUT: “We know that many of the objects [in the museum] were either destroyed in the allied bombing campaign or looted afterward.

“So unfortunately in this case, it might have been a US soldier who either looted it himself or purchased it from someone who had looted the object.”

It resurfaced in the charity shop, where Ms Young found it in 2018, although the shop’s owners said they do not know who donated it.

Ms Young, who owns antique business Temple Of Vintage, realised after the purchase that the art was probably looted, so she started to investigate how it could be returned to Germany.

With the help of a New York lawyer specialising in international art law, she notified the German government and arrangements were made for it to go to the Bavarian Administration Of Palaces, Gardens, And Lakes.

It is on loan at the San Antonio Museum of Art in Texas until May next year.

Ms Young said it had been exciting to see the bust in the museum, but also bittersweet.

She told the Express-News: “I liked him.

“I got attached to him in our house, right there in the entryway.

“You could see his reflection on the television.

“He became part of the house.”

A Psychedelic Trip to Timothy Leary’s Catalina Resort in Mexico