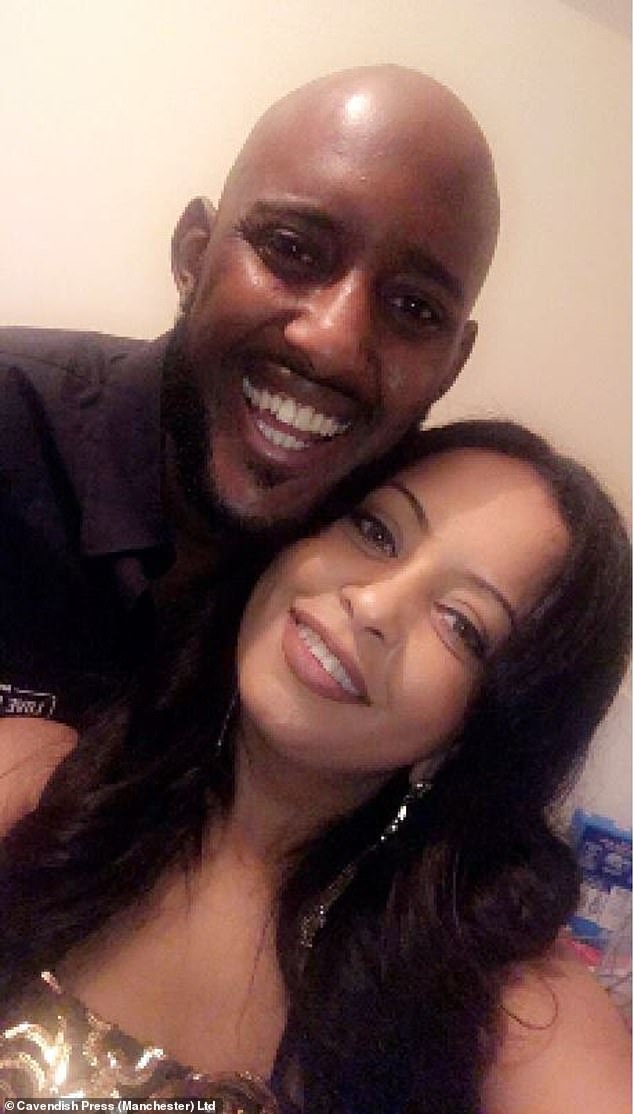 A children’s nurse who lived a secret double life as a crack cocaine trafficker was caught by police after posting a grinning selfie with her druglord boyfriend.

Mother-of-three Umi Noor, 37, used dirty money from a heroin and crack cocaine racket she secretly ran with lover Michael Hassan to rent out a string of lease cars and set up her own restaurant business.

When detectives investigating Noor’s activities she falsely claimed she had another boyfriend in a bid to cover for her gangster lover.

But officers found an incriminating picture of her with Hassan and messages between them detailing the extent of their drug dealing.

She was planning to use her new eaterie to launder the drugs money with one text she sent to Hassan reading: ‘I actually got something so good that is going to make all your money so clean.’

It emerged she had her own BMW 1 series car but proved she had leased it legitimately from her earnings as a nursery worker and also a NVQ training assessor.

At Manchester Crown Court she was jailed for four years and one month after admitting possession of drugs with intent to supply and conspiracy to conceal criminal property.

Hassan, 28, from Horwich, Bolton was jailed for six years after admitting similar offences. He is already serving four years for other drug offences.

The selfie of drug dealing duo Umi Noor, 37 (right) and her boyfriend Michael Hassan that police used to trap her 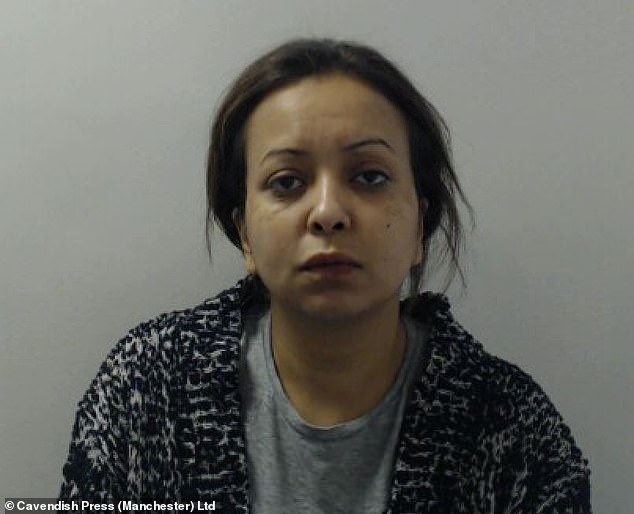 Noor, a children’s nurse who led a secret double life as a cocaine trafficker, was sentenced to more than four years behind bars at Manchester Crown Court

The pair were caught following a major police operation into organised crime which culminated in officers raiding Noor’s home on November 22 2019.

Two locked tins containing 363 wraps of heroin and 403 wraps of crack were discovered in a bedroom wardrobe.

When questioned, Noor tried to cover for Hassan, claiming that a man she was dating called ‘Rico’ had left the drugs in her home and that she had no knowledge of them.

But officers seized her phone and found the incriminating pictures of the lovers.

Detective discovered she was also hiring cars on behalf of Hassan, to use for the distribution of drugs and had been setting up a takeaway in Bolton called Taste Buds to launder the drug money.

Police investigated the leasing by Noor of a BMW 1 series but she proved it was a ‘personal’ lease, paid for from her own legitimate earnings at the children’s nursery.

Documentation found within the house suggested that she had rented 10 different cars at a total cost of around £7000. 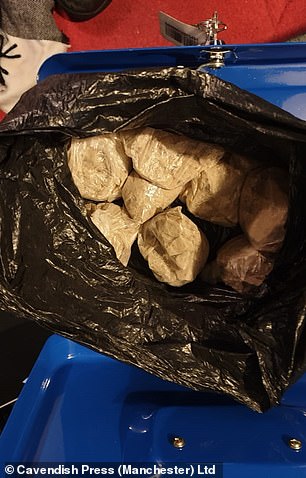 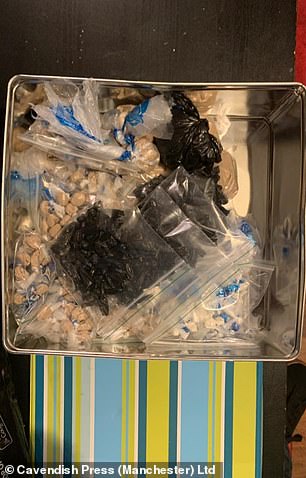 Andrew Evans prosecuting said: ‘Noor allowed her accounts to be used to muddy the waters as to who was conducting the short term rentals.

‘Such actions assisted Hassan in continuing to operate his Bolton based drugs supply from down the motorway in south Manchester, and in preventing its being detected by police.

‘He did not permanently live with her, but stayed for periods of time on a number of occasions.

‘When he did, he used her house to “bag up” and store his drugs, his cash and his “dirty” phones. She did not take steps to prevent him from doing this.’

During their relationship, Noor continued to work at the nursery while Hassan stashed drugs, cash and phones in her family home – where her three children, aged 15, 13 and 10, also lived.

Their agreement also allowed Hassan to prepare and package street level drugs in the house, which would then be driven to Bolton and supplied by dealers who would contact Noor when they could not reach Hassan.

Noor had a previous caution for permitting a previous partner to cultivate cannabis in November 2015. 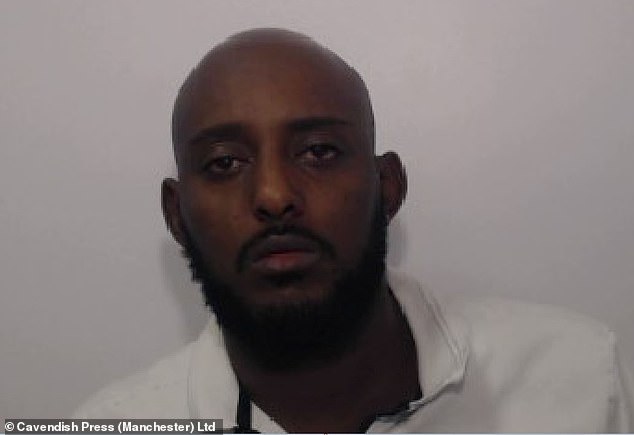 Her lawyer Miss Nicola Gatto said in mitigation: ‘She has now been in custody since November 2019 and has been separated from her three young children and she feels very much that she has missed some key stages in their life.

‘This is a woman who came to the country aged ten from Somalia, her mother having died very young.

‘Before she left, she believed she was an only child. She and her father moved to the South of England when she was aged 14. Her father tried to organize an arranged marriage. When she refused, she was the victim of physical abuse and put into care.

‘She remained in care until 17 when, ultimately, she reconnected with one sibling, a sister she was unaware of. She decided to move to Manchester to build a relationship with her. She was married to a man for some ten years and they had three children together but there came a stage when he wanted to have a polygamous relationship, and it was not something she wanted to participate in.

‘She ended up as a single mother was in debt and had council tax arrears. She was working in a nursery. She was in receipt of pay at £500 per month and was also working as an NVQ assessor.

‘She had a further relationship before meeting Mr Hassa by chance through friends, and she fell in love with him. It quickly became apparent that he was dealing drugs but initially, he treated her extremely well. She hoped, finally, that she had met somebody who would be protective.

‘She accepts that she benefitted to a degree, that he would take her out. But she wasn’t living a lavish lifestyle.

‘Whilst she is a feisty lady, she was very emotionally involved with this man. She did try to extricate herself from this relationship a number of times.

‘She was not “cuckooed” in the strict sense but she admits she turned a blind eye to what was going on. She bitterly regrets that and it’s left her life in ruins. There was a degree of emotional exploitation.’

‘In relation to Tastebuds she sent texts to Hassan saying: ‘I will give you all I have for the shop. I do not want to be part of anything you do anymore. Just let me be!’

Sentencing Noor, Judge Suzanne Goddard QC told her: ‘There are text messages that showed that you are a feisty and confident woman, far from being forced or pressure into this.

‘You were very much in love and from time to time, you were prepared to allow him to use your premises. You did not have a lavish lifestyle.

‘I do hope in the future you will put your family and children first. If you had done so, you would not be in the dock at all.’