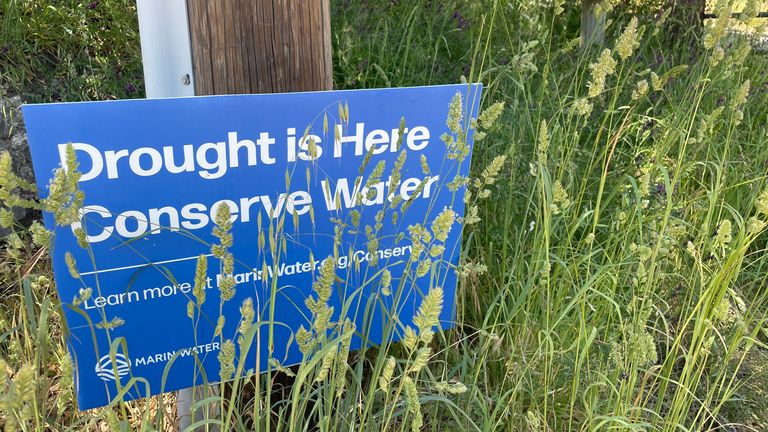 A stolen car has just been recovered from a reservoir in Marin County in California, 25 years after it was dumped there.

They only spotted it because the water level has dropped so low – a chilling sign of what the authorities say is a “historic” drought and the impacts of climate change.

The reasons are simple. “2020 was the driest year in 90 years, it is alarming,” said Cynthia Koehler, the founder of the WaterNow Alliance and president of the board of directors of the Marin Municipal Water District.

The water levels are so low in the seven reservoirs that supply Marin County that she and the board have imposed mandatory restrictions on residents. Filling swimming pools and car washing have been banned and neighbours are being encouraged to report those violating the restrictions.

“It is clearly tied to climate change. The changing climate and everything we know from the scientists is that climate change is going to bring us droughts that are more frequent, severe and intense and that’s what we’re experiencing,” Ms Koehler added.

A new once-in-a-decade update from the US government’s National Oceanic and Atmospheric Administration on climate “normals” has reported an “upward shift in temperature averages” as being evident, most notably in the American west and south west. It won’t surprise anyone in California.

A state which has seen intensifying wildfires for years only emerged from its last major drought two years ago. Now, virtually all of the state is classified as being back there again.

At the Phoenix Lake reservoir, two fisherman forlornly dangle their lines in water currently about a third of its normal level. A heron, hopeful of some newly exposed aquatic life, stalks the baked mud bank.

An island has emerged in the middle of the reservoir within the last two weeks. The park rangers cannot remember seeing the level this low.

It is only about six miles as the crow flies to the famous Marin County weekend playground of Stinson Beach. Scientists have warned that the low-lying homes there will be obliterated by sea level rise within a generation.

California is climate change in action.

Cynthia Koehler says the state has been successful in improving water conservation over the decades. “In the 70s, California was saved from drought by toilets. They used to use a lot of water and now they don’t. You can’t buy high-flush toilets any more.”

:: Subscribe to ClimateCast on Spotify, Apple Podcasts, or Spreaker.

Now the focus, she says, has to be on the 50 per cent of water used outside the home, on things like keeping alive thirsty non-native plants.

“The reservoir of opportunity is quite high,” Ms Koehler said.

Residents like Jens Jensen have listened to the warnings. He has replaced his lawn with artificial grass and has a roof of glass solar tiles.

“We have to do it. We see what is happening now and it is going to be severe.”


We look at what’s making America warmer, find out why the sea is crucial for combating climate change and Uber goes green.

Hosted by Anna Jones, The Daily Climate Show is following Sky News correspondents as they investigate how global warming is changing our landscape and how we all live our lives.

The show will also highlight solutions to the crisis and show how small changes can make a big difference.

People searched for missing loved ones, including children.

Tens of thousands of Palestinians displaced in Gaza: UN |…

Spain Turns to Corruption Rehab for Officials Who Can’t Stop…

Prince Harry and Meghan star in trailer for duke’s…