Colombia’s Troubles Put a President’s Legacy on the Line 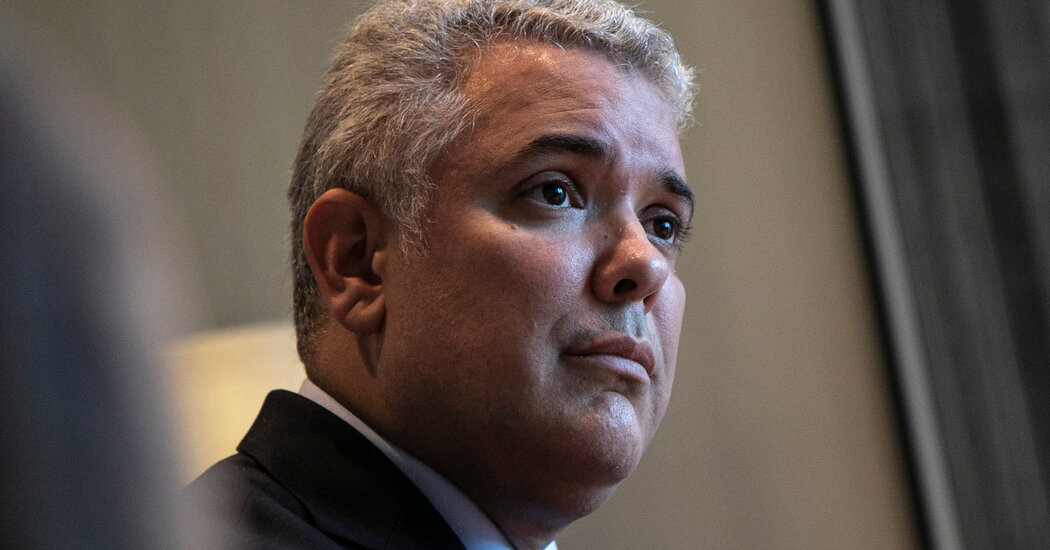 SEOUL — Iván Duque swept into Colombia’s presidency in 2018 as a young, little-known technocrat riding a surging right-wing movement. He tapped public anger against a peace deal that he said had treated the country’s deadly insurgents too softly. And he warned that the proposals of his left-wing opponent could stifle steady growth.

Three years and a global pandemic later, it is Mr. Duque who is presiding over high unemployment and an angry electorate — and who is on the defensive about the steps he has taken to tame persistent violence by militants.

Mr. Duque contends his policies have opened opportunities for the middle- and low-income classes, encouraged entrepreneurship and paved the way for Colombia to return to its prepandemic growth. He also touted social policies that could address issues of police conduct and social inequality that led to violent clashes this year, killing dozens.

“The three pillars of our overall plan of government, which were legality, entrepreneurship and equality, have been producing results,” Mr. Duque said last week in an interview in South Korea with The New York Times. “Obviously, they were affected by the pandemic. But I think we have demonstrated our resilient spirit.”

Mr. Duque’s legacy — and that of his patron, the firebrand former President Álvaro Uribe, who still dominates Colombian politics — is on the line. Colombian voters go to the polls in May, when Gustavo Petro, a former presidential candidate, previous mayor of Bogotá and a onetime guerrilla member, could become the country’s furthest-left leader in its history at a time when leftists are again claiming victories across South America.

Mr. Duque can’t run again because of term limits, and his party’s candidate hasn’t been determined. Still, his government faces some of the lowest approval ratings of his presidency. Colombia’s economy, trade and investment from abroad were hit hard by the coronavirus, which exacerbated long-running social tensions over stark wealth inequality and police conduct.

He has also come under increased pressure to tame Colombia’s armed insurgencies and hasten the fulfillment of the government’s peace deal with the Revolutionary Armed Forces of Colombia, known by the Spanish acronym FARC, despite his criticism of the terms of the deal on the 2018 campaign trail.

In South Korea, Mr. Duque was seeking trade and investment opportunities, such as expansions by Korean manufacturers and increased sales of Colombian coffee, avocados and bananas. He even cited the filming of a South Korean movie — Mr. Duque has long championed creative investments in areas like the arts and research — in Bogotá.

The challenge for Mr. Duque, Mr. Guzmán added, is that a victory by Mr. Petro could undo what he and his predecessors had accomplished.

“He’s a weak president,” said Mr. Guzmán. “He’s a lame-duck president. He’s a president whose most important legacy will be for his successor not to be able to undo his own policies.”

Mr. Duque disputed that, saying that his efforts — including wage subsidies and a proposal to widen university access — could help put the economy back on track. “We have concentrated in our administration not to promote polarization, but to move the country into the right direction.”

Though a protégé of Mr. Uribe, the charismatic leader who revved up the government’s offensive against FARC nearly two decades ago, Mr. Duque never fully fit the populist mold. Born into a politically prominent family, the 45-year-old president worked for years in development banking. He speaks in clipped, think-tank English: “I will give you very concise numbers,” he said at one point before doing exactly that.

He was elected after campaigning on increasing economic growth and changing the terms of the peace accord with FARC, but he quickly ran into challenges. In 2019, frustration over the lack of opportunities and possible pension changes sparked mass protests. So did a tax proposal this year meant to close a fiscal hole exacerbated by the pandemic.

Mr. Duque’s tax proposal had merit, said Luis Fernando Mejía, director of the Colombian research institute Fedesarrollo, but he seemed unable to sell it to the public.

“It was a very, very good reform,” he said, “but he was not able to consolidate political capital and to create an adequate strategy to push through a reform that I think had been very important.”

Mr. Duque is also trying to thread the policy needle in a polarized time, making it increasing difficult to please both his party’s base and unhappy voters.

The tax protests became part of broader unrest over inequality and police violence. Some police used brutal and deadly force on demonstrators.

In the interview, Mr. Duque cited his efforts to increase scrutiny on the police and to equip them with body cameras. But he said some of the demonstrators had been spurred by “people producing fake news” and other instigators to elevate the violence.

His trickiest balancing act may be enacting the peace accord with FARC. In 2019, his effort to alter the terms, including tougher sentencing for war crimes, failed on legal grounds. Internationally, he is under intense pressure to carry out the accord, but domestically, his party and other conservatives continue to criticize it.

Just weeks ahead of the deal’s five-year anniversary, more than half of its measures have not been applied or have barely begun, according to the Kroc Institute at the University of Notre Dame, an independent entity charged with oversight of the deal. Opposition groups and some of the electorate say Mr. Duque missed a critical window to push it forward.

Mr. Duque and his supporters point to the accord’s time frame, which calls for its tenets to be enacted over 15 years. In the interview, he said that he had done more than his predecessor, Juan Manuel Santos, to put in place the peace deal’s landownership overhauls and development plans that would give poor farmers and former rebels jobs and opportunities.

“We have been not only implementing, but the issues that we have been implementing are going to be decisive for the evolution of the accords,” he said, adding, “We have made a good progress.”

Mr. Duque must balance competing interests overseas, as well. Tensions have risen between the United States — Colombia’s longtime ally — and China, a growing source of business for the country. China, Colombia’s second-largest trading partner after the United States, has invested in mines in the country and successfully bid on engineering contracts.

Mr. Duque said that the Chinese companies had won the work in open bids and that relations with the United States remained warm. “We try to build our relationship with our partners based on investment and trade and common opportunities. But usually I have to highlight that in the case of the United States, our alliance has been existing for almost 200 years, and we will continue to see the United States as No. 1.”

With the United States, relations hit an awkward moment last year when members of Mr. Duque’s party endorsed Donald J. Trump and Republicans in the election, provoking a rare rebuke from the U.S. ambassador.

These examples of polarization, he said, has complicated efforts to fix deep-rooted problems. The world is polarized, he said, as people “connect demagoguery and populism with violent sentiments and algorithms and people producing fake news and manipulating the truth.”

He added, “That’s why we have concentrated in our administration not to promote polarization, but to move the country to the right direction.”

Band of Robbers Tie Hostages to Cars in Brazilian City