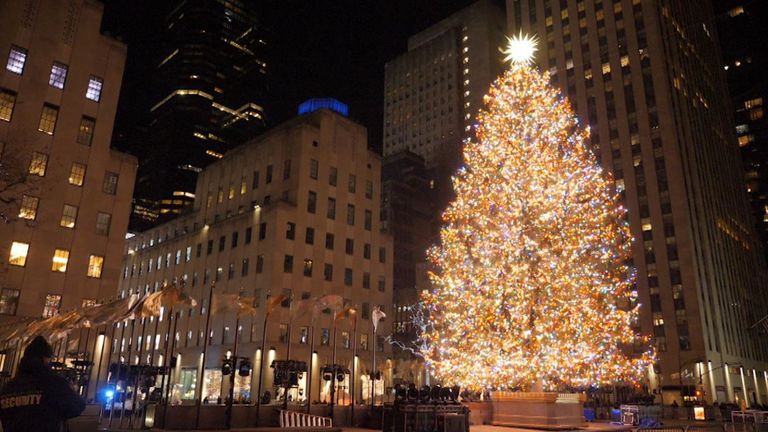 The familiar moment the Christmas lights went on in midtown Manhattan only highlighted the surreal scenes of an empty New York.

The tree illumination in Rockefeller Plaza had the usual theatre, but was empty of the thousands of people who usually pack the area to watch the display.

And there was little to cheer about this year as the country marked its deadliest day of the pandemic so far.

America is breaking coronavirus records with more than 100,000 COVID patients now in hospital – nearly double the amount at the worst point of the pandemic’s first wave.

Tight restrictions are a legacy of the hell New York experienced in the country’s first wave, and small gatherings are being blamed for its second.

That didn’t stop many trying to gather to watch the famous light display begin outside Saks Fifth Avenue.

The city has been through a lot this year and many seemed desperate to feel a little joy.

“I think the more people that gather, the more they travel, it’ll get worse – but I wanted to come see the tree anyway,” said Kelsey Stirling, who lives in Midtown.

Kneco, visiting as a key worker from Texas, said: “It’s been going on for so long. A lot of us are extremely tired and so we just took a chance and came out here anyway.”

Her co-worker Charles Ward added: “I don’t think it can get any worse.”

The reality is it can get worse and the numbers suggest it will.

Cases are now exploding across the country – state after state is reaching near hospital capacity. Los Angeles’ mayor has told residents to cancel everything.

Despite warnings to stay at home, nearly a million Americans travelled for Thanksgiving. The country is still bracing for the full impact of last week’s holiday and test sites are overwhelmed with New Yorkers returning from the break.

The city’s positivity rate is now at around 5%.

“My brother has it right now. My nephews both have it. It’s scary,” said Alix Baker, waiting outside a testing clinic in Brooklyn. “One hundred per cent, people shouldn’t be travelling.”

But for others, they’re fed up and want to see their families in other states.

Like Marco Perrone, who plans to visit his mother for Christmas.

“I just want it to be over with so I can go out with my friends again and have fun again. It’s just work, sleep, eat – that’s it,” he said.

A return to normal still feels a long way off here. New York is still empty of the usual crowds and still closed to most other states.

An almost empty Times Square still feels a very surreal sight. But coronavirus numbers paint an even bleaker picture with new infections at a record high across the US.

“The cases are going to go up again. We’re going to see that again because obviously there’s a lag time from people becoming infected to having infections, and then a couple of weeks later we’ll probably see an increase in the number of deaths,” said Danielle Ompad, professor of epidemiology at NYU.

“For many people it’s going to be a devastating Christmas.”

Certainly the holiday season is only adding to concern a surge is expected across America.