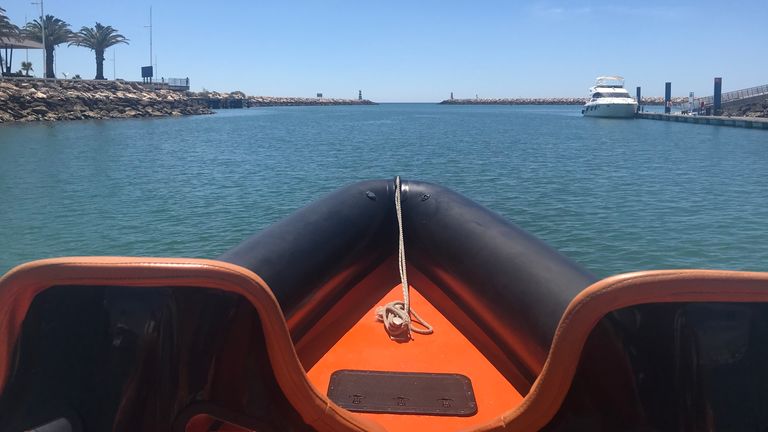 There are few better ways to see the gem that is the Algarve than from the water.

And we set off in a rib from the marina at Vilamoura.

Heading out to sea and bouncing along past beaches and resorts which look unusually quiet for this time of year.

Many loungers are empty, towels and bodies positioned far apart. There’s something missing, and it’s the UK holidaymakers who haven’t been able to visit Portugal for months.

But that’s all about to change.

Tourists from the UK will be Portugal-bound in the coming hours and Christiano Cordairo from Vilamoura Watersports couldn’t be happier. Onboard the rib, he tells us the last year has been really tough.

“Usually around 90% of the tourists around here are from the UK and we missed all of that for months,” he says.

“We tried to keep as many people in work as possible but with little tourism some people had to leave the company. Hopefully things will now get better.”

The news that Portugal was to be put on the UK government’s travel green list, meaning visitors won’t have to quarantine when they return home, sent weather-weary Brits rushing for computers and travel agents to book the first flights out.

Twenty flights are due to arrive from the UK into the Algarve’s Faro airport on the first morning tourists are allowed in.

Staff we spoke to are braced for crowds.

Passenger service manager Cidalia Palma said “it’ll be a good and a bad day”, alluding to the mixed emotions of impending demand at an airport which has been eerily quiet during the pandemic and the joy at seeing it bustle once again.

And she’s not the only one preparing to step up a gear.

On Albufeira’s famous strip-much loved by UK partygoers – you usually struggle through the crowds to get a drink.

Not when we visit in the hours before the first holiday flights from the UK touch down. And staff manning the bars and restaurants are actually looking forward to being busy again.

We meet bar worker Emily McLaughlin who says things will be different. Drinking will have to stop at 10.30pm instead of the usual 4am to comply with COVID rules. But she says things are heading in the right direction.

She says: “We are really looking forward to it. Hopefully things will come back round for us again.”

Next door, At The Temple Bar, Lisa Molenkamp, told us: “We miss the British because the British are always here in the day time and the night time. It’s really enjoyable to have them because they always like to make a party.”

Back up the coast in Vilamoura, the phone has been ringing non-stop at Rui’s steak house where UK visitors love to dine.

Owner Gabriel Robu says all the profits he built up since taking over the business were wiped out in the last year but now the reservation book is looking healthy again.

He told me: “Straight away after they put the news on TV, people they start phoning and making bookings. So that gives you hope for the future.”

There is a real sense of optimism in the Algarve. Ask anyone in the tourist sector and they will tell you this is the beginning of the bounce back. Or at least that’s what they’re hoping for. They’re counting on travel from the UK building over the summer.

And yet a few admit to feeling just a little mournful about the imminent arrivals. Some of the locals who’ve enjoyed having the beaches pretty much to themselves.