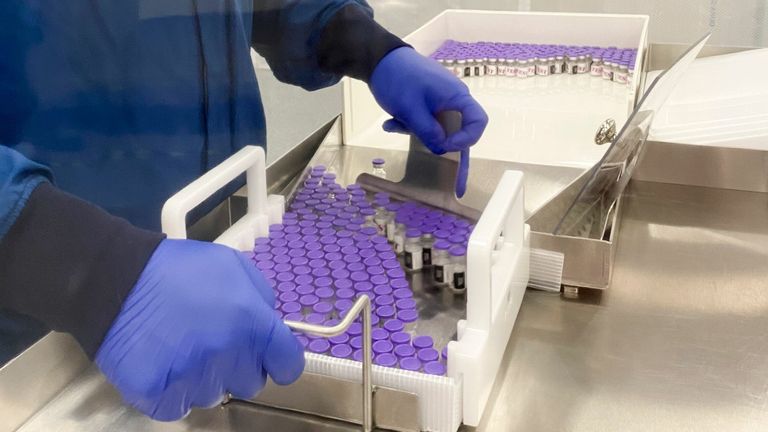 Criticisms of the speed with which the UK approved the first coronavirus vaccine are “mistaken”, a former regulator has said, adding that approval was faster in the UK because Brexit gave the regulator a brief moment of “spare capacity”.

Professor Stephen Evans, who worked on vaccines for the previous incarnation of Medicines and Healthcare products Regulatory Agency (MHRA), was responding to comments made by Dr Anthony Fauci, the director of the US National Institute of Allergy and Infectious Diseases.

Dr Fauci criticised regulators that proceeded “quickly” and “superficially”, saying that the US had “the gold standard of a regulatory approach.” By comparison, he said: “The UK did not do it as carefully.”

But Prof Evans, who is professor of pharmacoepidemiology at the London School of Hygiene and Tropical Medicine and an expert on clinical trials, told Sky News that Dr Fauci was “mistaken”.


Behind the scenes of the Pfizer vaccine

“I respect him enormously… but he is not a regulator, he is a researcher… His criticism, I don’t think, has a great deal of validity.”

Asked why he thought Dr Fauci had made his statement, Prof Evans said: “I imagine it’s because there’s been criticism of [American regulator] the FDA being slower than the MHRA in the assessment of this particular vaccine. But that’s been the sort of complaint that’s been made over a long time, that one regulator or another has not been quick enough in doing things.”

Yesterday, the UK became the first western country to license a coronavirus vaccine, but the pace of its regulatory approval process has attracted some criticism, with suggestions it was putting speed over winning public confidence.

Prof Evans said that the regulatory process for the vaccine had been hugely accelerated in all countries by the decision to perform rolling reviews which examined the data from the clinical trials while they were being conducted.

But even though it was still operating under EU law, he said, Brexit was still a benefit to the MHRA, because the regulator, which previously provided substantial input to the European Medicines Agency, was no longer doing work for Europe.

Yesterday, Health Secretary Matt Hancock claimed that the authorisation of the vaccine had been possible “because of Brexit”, although in fact it was performed under EU law.

“My own theory is that because we came out of the EU system around 18 months ago and stopped taking on work for Europe, we have people in the regulatory authority, who until January have some spare capacity,” said Prof Evans.

However, Prof Evans warned that the breathing space would end once the transition period comes to an end, saying that “once we get into 2021, there won’t be the spare capacity, so it may well be that the UK is a bit slower in the future.”

Asked whether the American FDA represented the “gold standard” for regulators, as Dr Fauci asserted, Professor Evans said that the “one key difference” between it and other regulators was that it tended to ask for all trial data from pharmaceutical companies in order to reanalyse it.

But he said: “It’s only a higher standard, if it gives you different conclusions. Nearly all differences in conclusions relate to the interpretation of the data rather than the actual numbers” – although he admitted that it was .

The MHRA has also been criticised for its speed by the European Medicines Agency (EMA), which suggested that its slower approach was more likely to win over public confidence.

It emerged today that the EMA and the World Health Organisation had asked the MHRA to see the data it had used to assess the Pfizer vaccine.

“This decision is a big decision by any of the national regulatory authorities because it will instil trust in the system,” said Dr Siddhartha Sankar Datta, Programme Manager for Vaccine-preventable Diseases and Immunisation at WHO Europe.

Hamish MacInnes, Scotland’s Man of the Mountains, Dies at 90