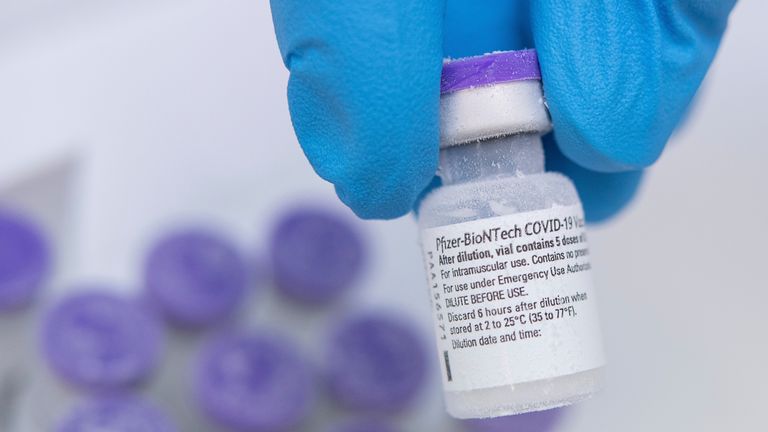 Studies are under way into how effective a third shot of the Pfizer/BioNTech vaccine could be in increasing immunity against coronavirus.

Researchers will be examining whether having a second booster dose would help with cases of COVID-19 caused by existing and also new variants of the virus – like the one first found in South Africa.

The risk of becoming ill with coronavirus falls by 95.8% after the second dose of the Pfizer vaccine, Israel’s health ministry said earlier this month.

Speaking to NBC on Thursday, Pfizer chief executive Albert Bourla said: “We believe that the third dose will raise the antibody response 10 to 20 fold.”

People who took part in the original phase one or two trials and who are trialling a third shot will get their new jab six to 12 months after their initial set of injections.

The third shot will be exactly the same as what participants got before.

Separately the Pfizer/BioNTech teams are in talks with regulatory bodies – like the US Food and Drug Administration (FDA) and the European Medicines Agency – about potential studies into new forms of their coronavirus vaccine.

These would involve testing a new makeup of the jab based on the B.1.351 South Africa variant.

As an mRNA vaccine, the Pfizer/BioNTech jab trains the body to fight infection by injecting a harmless part of the virus into the body to train our defences to fight it.

If these studies go ahead, Pfizer and BioNTech say it will help put them in a position to quickly update their vaccines depending on the strains that appear.

Ugur Sahin, chief executive and co-founder of BioNTech, said: “Our proactive clinical development strategy aims to create the foundation today, that will enable us to address the challenges of tomorrow.

“We want to be prepared for different scenarios.”

He said: “The rate of mutations in the current virus is higher than expected.

“It’s a reasonable probability that we would end up with regular boosts. And for potent vaccines, it may be that you need to do a strain change every few years, but not necessarily every year.”

Mr Bourla added: “A likely scenario is that we will not have a three dose vaccine.

“We will have an annual revaccination, likely with one dose of the vaccine.

“And that could be an annual booster either with the same vaccine or, if there is a change in the variant, with an adapted to the new variant vaccine.”

Moderna, another vaccine maker, had previously announced it was set to start tests on new versions of its jabs adapted to target variants of the coronavirus.