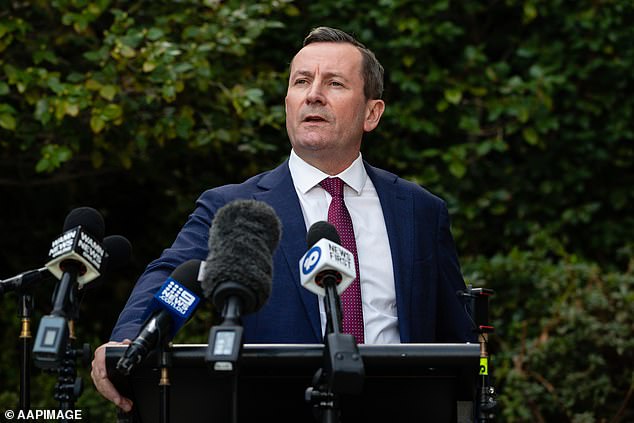 Perth has been plunged into a four day lockdown after a man caught coronavirus from a woman who had visited Sydney in a city gym.

Anyone living in the Perth or Peel regions will be under stay-at-home orders from midnight on Monday, and are only allowed out for essential reasons.

Gyms and places of worship will be forced to close and all social gatherings are banned, with no one allowed to leave the metropolitan area for all but essential reasons.

Masks will also be mandatory in all indoor settings outside the home.

It comes as Western Australia records two new local coronavirus infections who came into brief contact with a previous case.

A physiotherapist who visited an infected Bondi cafe in Sydney passed the disease onto a 32-year-old woman after ‘fleeting contact’ at the Mobius Health and Performance Gym in Joondalup, Perth.

A second case of community transmission has also been found, a man in his 30s who worked at the Indian Ocean Brewing Co in Mindarie, after one of the infected women dined there.

They were sat at different tables and did not know each other, pointing to the worrying infectivity of the Indian Delta variant.

Mr McGowan has also released a number of potential exposure sites, including the gym, a dog grooming centre and a supermarket. 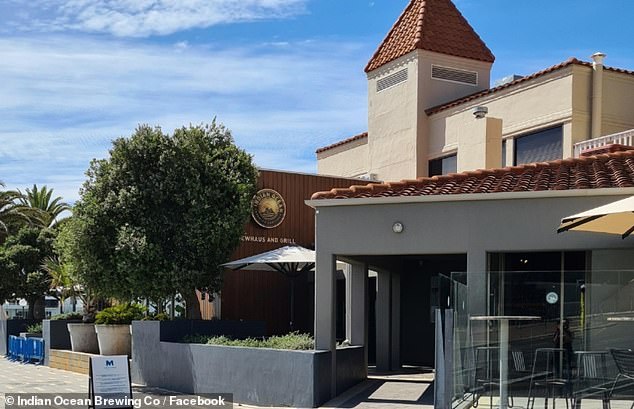 A second case of community transmission has also been found, a man in his 30s who worked at the Indian Ocean Brewing Co (pictured) after one of the infected women dined there

‘This is a concerning development. It demonstrates just how quickly this variant can spread,’ the premier said.

‘We will do whatever we need to do to keep the community safe.’

Health officials are currently tracking down the woman’s known close and casual contacts.

They have already identified 114 close contacts for the returned traveller and 27 of those have returned a negative Covid-19 test so far.

Regarding workers who returned from a Northern Territory mine, Mr McGowan said 177 people who’d been at the site during the infectious period had been identified and were in isolation.

So far, 149 had tested negative in what the premier described as encouraging results.

The new virus case in WA came after the state announced stronger border restrictions on the Northern Territory, Queensland and the ACT.

From 6pm on Sunday, travellers from those jurisdictions have been deemed low risk, meaning they must get tested and self-isolate for 14 days after arriving in WA.

A hard border was earlier reimposed for NSW residents.

Local restrictions including a 30-person limit on house visits and mandatory mask-wearing indoors and on public transport.

Venues such as pubs, cafes, restaurants, places of worship and gyms are limited to one person to every two square metres.

Events that cannot be restricted to 150 people will be cancelled or, in the case of sporting fixtures, played without spectators.

Health Minister Roger Cook said it was still early days in dealing with the current outbreak and the situation remained ‘largely under control’.

‘The next 24 to 48 hours will be crucial to see the results from the testing that has been undertaken,’ he said.

Mr McGowan said if the progress and testing results over the coming days warranted increased restrictions, the government would not hesitate to act.

‘We moved yesterday to put in place a range of measures to protect the community,’ he said.

‘But if we need to go further we will.

‘I think the evidence is now there that moving more quickly, acting with force, is the right model.’

On Monday the WA branch of the AMA called on the state government to move to a lockdown of two to three days, to ensure contact tracers are on top of the situation.

‘We urge the government at this stage to move to a short lockdown that does allow continued essential services,’ said AMA WA president Mark Duncan-Smith.

‘We have significant fears that because it’s the Delta variant, and that we’ve seen this already occur in NSW … that it’s actually gotten away from the contact tracers.

‘This situation we’re in now is worse than the situations that previously have led to a lockdown.

‘We think it would be a prudent and conservative thing to do … this could easily get away from us.’

PERTH IN COVID LOCKDOWN FROM 12.01AM TUESDAY – HERE ARE ALL THE RULES

From 12.01am on Tuesday, restrictions will be in place for a minimum of four days across the Perth and Peel regions:

– One hour of exercise per day up to 5km from your home, with up to one other adult or any number of children from your household

– For medical and health purposes or to be vaccinated

Woolworths, BWS and even a public toilet are listed on QLD’s worrying new Covid exposure list