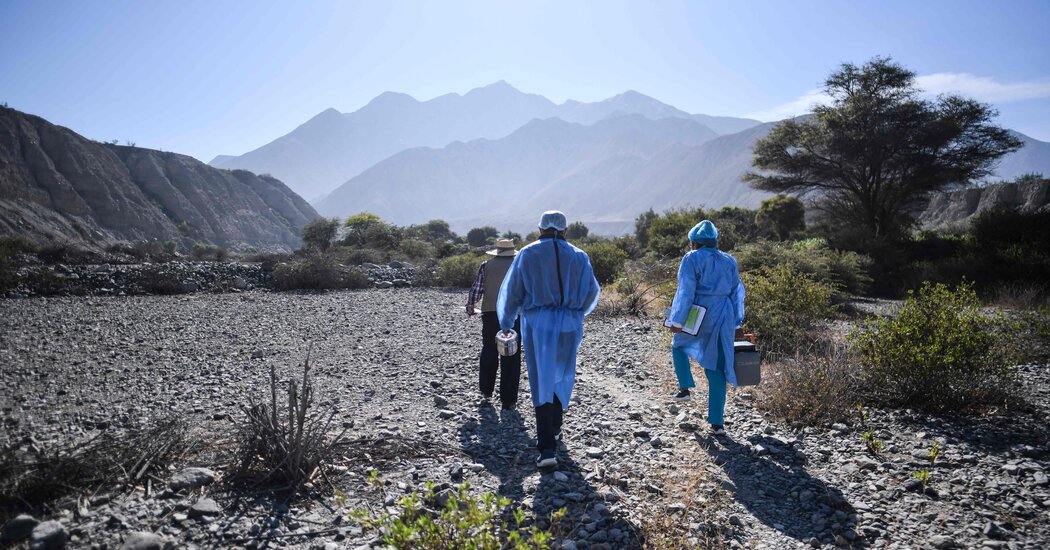 RIO DE JANEIRO — Just a few weeks ago, Covid-19 was spreading with alarming ease across a cluster of nations in South America, overwhelming hospital systems and killing thousands of people daily.

Suddenly, the region that had been the epicenter of the pandemic is breathing a sigh of relief.

New infections have fallen sharply in nearly every nation in South America as vaccination rates have ramped up. The reprieve has been so sharp and fast, even as the Delta variant wreaks havoc elsewhere in the world, that experts can’t quite explain it.

Brazil, Argentina, Chile, Peru, Colombia, Uruguay and Paraguay experienced dramatic surges of cases in the first months of the year, just as vaccines started to arrive in the region. Containment measures were uneven and largely lax because governments were desperate to jump-start languishing economies.

“Now the situation has cooled across South America,” said Carla Domingues, an epidemiologist who ran Brazil’s immunization program until 2019. “It’s a phenomenon we don’t know how to explain.”

There have been no new sweeping or large-scale containment measures in the region, although some countries have imposed strict border controls. A major factor in the recent drop in cases, experts say, is the speed with which the region ultimately managed to vaccinate people. Governments in South America have generally not faced the kind of apathy, politicization and conspiracy theories around vaccines that left much of the United States vulnerable to the highly contagious Delta variant.

In Brazil, which had a slow, chaotic vaccine rollout, nearly 64 percent of the population has received at least one dose of a vaccine, a rate that exceeds that of the United States. That led President Jair Bolsonaro, who had initially sowed doubts about vaccines, to brag last week.

In Chile and Uruguay, more than 70 percent of the population has been fully vaccinated.

As cases have dropped, schools in much of the region have resumed in-person classes. Airports are becoming busier as more people have started traveling for work and leisure.

The drop in caseloads led the United Nations this week to provide a more optimistic projection of economic growth in the region. It now expects economies in Latin America and the Caribbean to grow by 5.9 percent this year, a slight increase from the 5.2 estimate it had in July.

“We’ve managed to delay major circulation of the Delta variant and move forward with the biggest vaccination campaign in our history,” Carla Vizzotti, Argentina’s health minister, said earlier this week.

In Argentina, more than 61 percent of the population has received at least one dose of a vaccine.

Chrystina Barros, a health care expert at the Federal University of Rio de Janeiro, said she worries that falling caseloads will lead people to become complacent about mask wearing and avoiding crowds while the epidemic remains a threat.

“There is a serious risk of putting the very effectiveness of the vaccine at risk,” she said. “The cooling of the pandemic cannot inspire people to relax in relation to the crisis.”

Jairo Méndez Rico, a viral diseases expert advising the World Health Organization, said the Delta variant may have been slow to gain traction in South America because so many people in the region have natural immunity from having had the virus. But he said the variant could still lead to new surges.

Understand Vaccine and Mask Mandates in the U.S.

“It’s not easy to explain,” he said. “It’s too early to say what is happening.”

Despite the uncertainty, governments in South America are moving to reopen borders in coming months. President Alberto Fernández of Argentina said in late July that the path to normalcy is in sight.

“We deserve another life, a life in which we enjoy music, painting, sculptures, movies, theater,” he said. “A life in which we can laugh without a face mask, where we can hug those we love.”

Jennifer Mac Donnell, a cosmetologist in Buenos Aires, is days away from a mid-September wedding — a milestone that has felt uncertain for much of the year.

“We feared we were going to be forced to cancel it,” the 39-year-old said. “Now we’re much more calm, cases are down, most of our friends are vaccinated and everyone is just focused on having a good time.”

Florida shooting: Mother and baby among four killed – as suspect in gunfight with police | US News