Cuban Migrants Arrive to U.S. in Record Numbers, on Foot, Not by Boat

By Maria Abi-Habib and Eileen Sullivan Last updated May 3, 2022 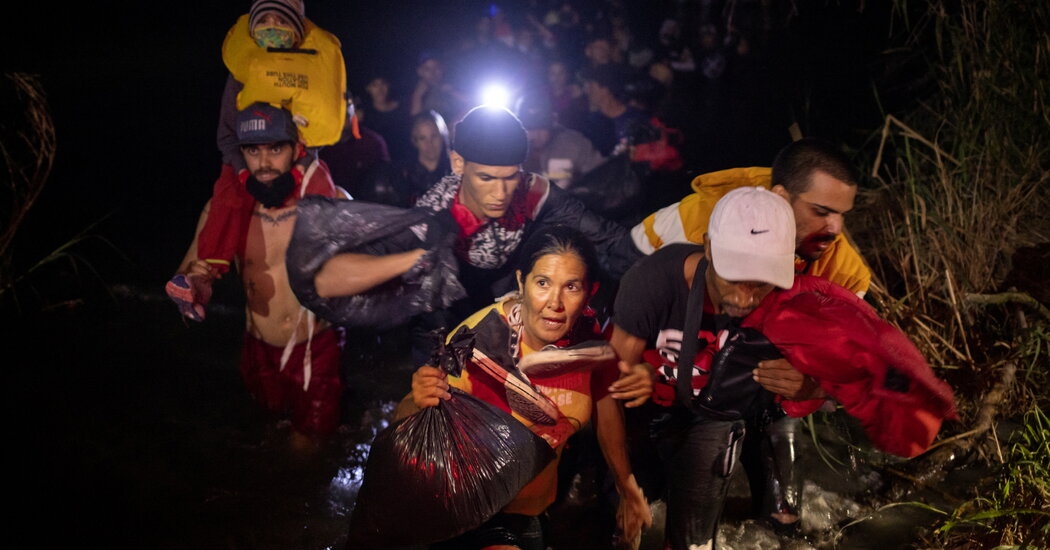 Cuban migrants are arriving to the United States in the highest numbers seen in four decades, with about 150,000 expected to arrive this year, according to senior American officials, as the economic and political situation on the island grows more desperate.

For decades, Cubans trying to flee repression, food insecurity and economic devastation boarded rickety boats, risking their lives to get to American shores.

Now they are coming in record numbers, but this time on foot, their flight aided by Nicaragua, which dropped visa requirements late last year for Cubans, giving them a toehold in Central America to journey overland through Mexico to the United States. American officials have accused Nicaragua’s authoritarian president, Daniel Ortega, of enacting the policy to pressure the United States to drop sanctions on his country.

The surge in Cubans trying to cross the southern border represents just a portion of migrants who have at times overwhelmed border officials as undocumented crossings continue to rise under the Biden administration. March set a record for the number of people caught crossing illegally in a single month in two decades: 221,303.

Since October — the start of the federal government’s 2022 fiscal year — nearly 79,000 Cubans have arrived at the United States’ southern border, more than in the previous two years combined, according to Customs and Border Protection figures. In March, more than 32,000 Cubans arrived at the border, most of them flying first to Nicaragua then traveling overland to the United States, according to a senior State Department official, who spoke on the condition of anonymity because of ongoing dialogue with the Cuban government.

The official said visa-free travel to Nicaragua was encouraging migrants to spend their life savings to pay smugglers for the journey, and added that some were falling prey to trafficking by criminal groups.

The numbers are the highest since the Mariel boatlift in 1980, when 125,000 Cubans migrated to the United States after the island nation opened its seaports to American vessels to evacuate anyone who wanted to leave.

Public discontent in Cuba has been simmering since mass protests erupted last summer across the country over escalating inflation, chronic food and drug shortages and ongoing power outages. During the Obama administration, the United States eased restrictions on travel and remittances to Cuba significantly, but they were resurrected under former President Donald J. Trump, dealing a harsh economic blow.

The demonstrations caught the Communist government by surprise and it has responded by imposing one of the biggest crackdowns in decades. More than 700 Cubans have been charged for taking part in protests, including some teenagers who received 30 years in prison.

The deteriorating political and economic conditions are feeding the growing exodus.

Nicaragua’s government dropped its Cuba visa requirement in November, opening a land route for migrants reluctant to embark on the dangerous sea journey to American shores. Since then the number of flights to Managua from Havana have soared.

“I think we are seeing governments try to weaponize migration because they know it causes political disruptions in receiving countries,” said Andrew Selee, the president of the Migration Policy Institute, a research institute in Washington.

Mr. Selee and other analysts said Nicaragua was likely using Cuban migrants to press the United States to lift sanctions on Mr. Ortega and his inner circle. The move has been compared to Belarus dropping visa requirements for Iraqis last year to facilitate their entry into the European Union, in retaliation for sanctions the bloc had levied on Belarus for its disputed election.

“They’re not fools,” Mr. Selee said. “The government in Managua knew that this would force the U.S. to come to the bargaining table at some point.” Still, it is unclear if the looser migration rules would yield any changes in U.S. policy.

Many Cubans are desperate to leave, even if it means going into debt to go on a perilous journey. Cubans describe selling whatever they have — homes, clothing and furniture — and taking loans with steep interest rates to raise the thousands of dollars they need to get to the United States, even though the average salary on the island is about $46 a month.

Zenen Hernández, 35, was one of 414 Cubans who crossed the Rio Grande into the United States on April 5, out of a total of 1,488 undocumented migrants who crossed that section of the Texas border (about 245 miles) that day.

The Cuban government blames the United States’ decades-long embargo of the nation for its economic woes.

The economy there was dismal before the pandemic hit, but Mr. Hernández scraped by, selling bread and chips. By the summer of 2020, the situation had become untenable. When Nicaragua opened its borders to Cubans, he decided it was time to go.

The cost was steep: $16,000 for the flight to Nicaragua and the ensuing 1,800-mile trek to reach the United States — often on foot — through the jungles, mountains and rivers of Central America and Mexico. Along the way, migrants are routinely threatened and extorted by the police and preyed upon by criminal organizations that kidnap and beat them for ransom.

When Mr. Hernández was asked to describe his trip, he choked up recalling the miserable journey.

Pent-up demand for legal crossings is another factor increasing migration. In 2017, the Trump administration slashed staffing at the United States Embassy in Cuba after a series of unexplained health problems that became known as “Havana syndrome” affected American personnel there.

The drawdown forced Cubans to apply for visas from the American embassy in Guyana, a trip too expensive for many. The move also prevented the United States from upholding its commitment to provide 20,000 immigrant visas to Cubans annually, part of a 1994 agreement between the countries to provide a legal pathway and discourage illegal migration.

This week, the United States Embassy in Havana will hold the first interviews for immigrant visa applicants since 2017, one of the senior American officials said.

The first high-level talks between Cuba and the United States since 2018 took place in late April, focused on restoring regular migration channels. The Cuban government asked the United States to uphold the agreement to issue 20,000 immigrant visas annually; the American government requested that Havana start accepting Cuban deportees who have arrived illegally.

“If the talks are successful, they will get back to a formula that worked before, providing a real, feasible legal channel for Cubans to come to the U.S. in exchange for the deportation of those who don’t use the legal channel,” said Mr. Selee, of the Migration Policy Institute. “Migration is a rare point of cooperation between the countries that has really worked.”

For decades, Cubans who migrated to the United States enjoyed preferential treatment. Those caught at sea were turned back but those who reached U.S. soil were allowed to stay, under a policy commonly referred to as “wet-foot, dry-foot.” President Obama ended the policy in 2017.

The bilateral talks came ahead of the Summit of the Americas in Los Angeles in June, where countries will try to agree on a regional framework for migration and shore up financial support for Latin American countries with large migrant populations. Colombia received $800 million last year in loans from multilateral lenders, including the World Bank, to support the 1.7 million Venezuelan migrants it hosts, the type of support the summit will look to extend throughout the region.

Although the Biden administration has maintained that only democratic governments will be invited to the summit, Cuba was invited to the previous two, in 2015 and 2018, and is hoping for an invitation this year.

But American officials said that was yet to be decided, sparking ire from the Cuban government.

“The United States resorts once again to all kinds of resources and lies to assert the right won by Cuba and its people to be present at these Summits on an equal footing with the rest of the countries in the region,” Cuba’s foreign minister, Bruno Rodriguez, tweeted on April 25. This is “something shameful.”