D.C. residents are lingering near supermarket pharmacies hoping to get leftover vaccine doses

Dozens of people are forming long lines from 4am by supermarket pharmacies in Washington D.C. to receive leftover doses of the COVID-19 vaccine before it spoils, despite not get being eligible.

Pharmacies in D.C. are following a recent mandate issued by Capitol officials that recommends no vaccine dose should go to waste, even if people fail to show up for their appointments.

As the Pfizer/BioNTech and Moderna vaccines must both be stored in extreme cold, administered shortly after they thaw, and cannot be refrozen, some D.C. supermarket pharmacies are asking those who happen to be nearby at closing time if they would like a leftover dose rather than being forced to throw it out.

Yet as stories spread on social media of people finding themselves in the right place at the right time to receive the leftover dose, others made plans to ensure they were near one of the pharmacies at closing time with hopes that they could be called on.

It has led to large lines forming at the pharmacies in Safeway and Giant stores in D.C. with some people waiting up to nine hours to ensure their spot in the queue and even forming their own waiting system.

As the lines of hopefuls have grown, endangering both themselves and store staff by crowding out corners of the store and making it more difficult to social distance, it has led to criticism from experts that a better system has not been established to ensure no vaccine goes to waste.

With no federal guidelines issued for procedure on what to do with extra vaccine doses that have already been defrosted, some providers are taking matters into their own hands. Pictired above is a vaccine line in Seminole County, Florida, where leftover vaccine doses were administered to shoppers at the end of the day rather than being thrown away 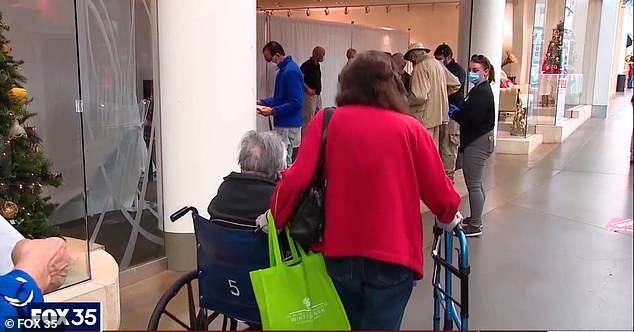 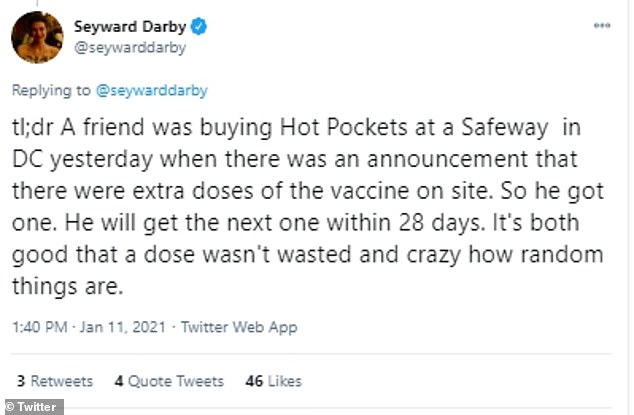 Images have emerged of unofficial waiting lines in D.C. as leftover vaccines are given to those nearby at closing time and news of the practice spread on social media

Workers in health care settings were the first people eligible for the COVID-19 vaccine in Washington D.C as part of Tier 1A

As of Monday, residents 65 and older were also made eligible as part of Tier 1B

This contiues the work of Tier 1A, also adding in correctional offiicers and staff working in Congregate settings and non-healthcare personnel supporting vaccination clinics

However, only 6,700 vaccine appointments were available for the week which quickly filled up

There are 85,000 health-care workers and 86,000 seniors eligible for vaccines in the District

The next tier will include staff in K-12 educational facilities, staff in child care facilities and staff in grocery stores as well as law enforcement and public safety

In the District, more than 26,000 doses had been administered as of Monday with figures updated weekly

In D.C., only healthcare workers and people over 65 are currently eligible to receive a vaccine. The eligibility was only extended to over 65s from Monday.

Yet with extra doses sometimes available, pharmacies have been left with no other option unless they are to be thrown out.

‘The fact that there’s some doses left at the end of the day is the nature of the beast,’ Saad Omer, a vaccinologist and the director of the Yale Institute for Global Health, told the Atlantic.

‘It’s obviously not ideal to have that kind of a situation, where you have high-risk groups and they’re not receiving it. One thing I hope people realize is that the staff there are trying to do their best.’

According to WJLA, the station received three calls from different pharmacy workers last week complaining about the line of people hoping to snag the extra doses.

One pharmacist told the station she was close to tears because of the unexpected extra workload and had at times been preventing from filling out her normal prescriptions.

Pictures of the lines have shown people crowding up the area around the pharmacy by early afternoon.

One image WJLA acquired from a Safeway in the D.C. area showed a long standby line, yet only one vaccine dose was leftover by closing time, forcing the others to begin their vaccine vigil again the following day.

‘I think a lot of the time that we spent waiting here for three-and-a-half hours was just anticipation and a little bit of anxiety,’ the 33-year-old woman who received the extra vaccine told the station.

‘And just remembering to stay out of the hair of the pharmacist just because they do look like they’re running around.’

Some residents extra eager to get the vaccine but not yet eligible have returned on multiple occasions but are thwarted by the early risers who are staking out their spots at the front of the line from 4am. 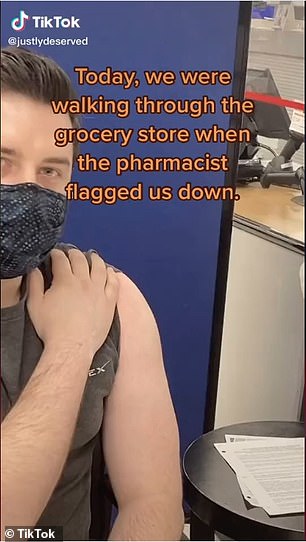 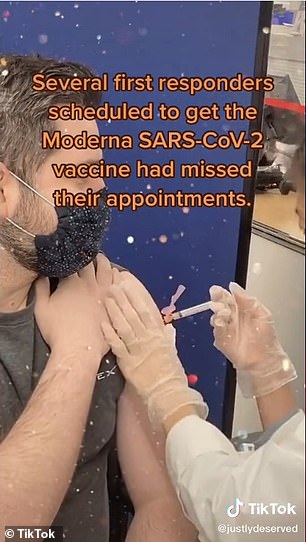 Law student David MacMillan shared a video to TikTok that also showed him receiving a vaccine after a pharmacist flagged him down in a D.C. Giant and offered a leftover dose 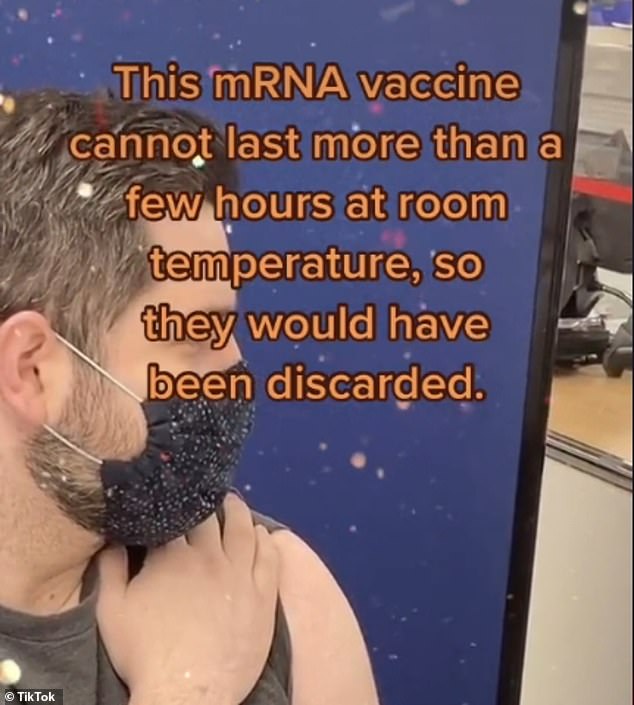 McMillan said the vaccine dose would have been disgarded otherwise, pictured

In a Giant supermarket in the Shaw neighborhood, non-employees have established a system where they give a numbered ticket to waiting newcomers.

‘Yesterday was a little bit of a disaster,’ one woman told The Atlantic on Sunday. ‘So that’s why we started doing the informal deli-number system—to try to create some order.’

On the same day in this Giants, Samir Balile, who is in charge of clinical programs at all 153 Giant pharmacies in the Mid-Atlantic, told the Atlantic hat he was forced to intervene and sent many people home.

‘Please don’t even come back,’ Balile said. ‘It’s too dangerous.’

And the lines have only grown as other residents share their lucky stories on social media.

One story on Twitter told how a friend had received a vaccine after happening to be in a Safeway when the announcement went out.

Government contractor Rob Towner, 36, also shared a video to Twitter of him receiving the vaccine after arriving to a Safeway in D.C. at around 2pm and waiting until closing.

Government contractor Rob Towner, 36, shared a video to Twitter of him receiving the vaccine after arriving to a Safeway in D.C. at around 2pm and waiting until closing 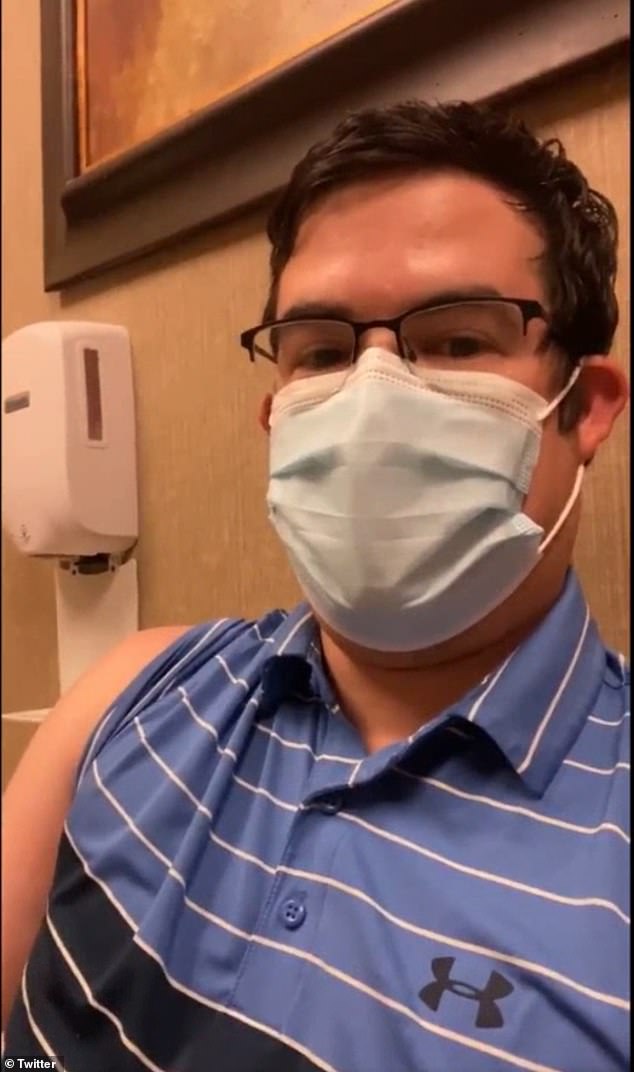 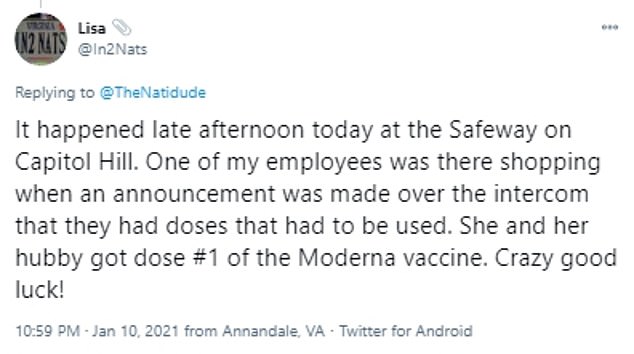 ‘There were stories about how in Israel, that if there were leftover vaccines, that technicians … would grab an Uber driver or a food delivery person.’ He told DCist/WAMU.

‘Then I began to see in Washington, D.C., to my surprise that there were Giant and Safeway locations where the pharmacists were effectively doing the same thing.’

And on New Year’s Eve law student David MacMillan shared a video to TikTok that also showed him receiving a vaccine after a pharmacist flagged him and a friend down in a D.C. Giant and offered them a leftover dose.

According to Giant supermarkets, its five pharmacies in D.C. are first administering excess doses to their staff, before offering it to people who look over 65 and then those over 18 if needed.

Those who receive the first dose in this manner will also be scheduled for an appointment to receive the second dose.

‘The DC Department of Health has made it clear to Giant that if doses of the Moderna vaccine will expire, they should be administered to anyone willing to take it,’ the company said in a statement.

‘The Moderna vaccine is viable for six hours after the first dose of the 10-dose vial is given.

‘The Moderna vaccine is valuable and lifesaving, and we are happy to not waste it by giving doses to our associates and customers should a healthcare worker not show up for their appointment.’ 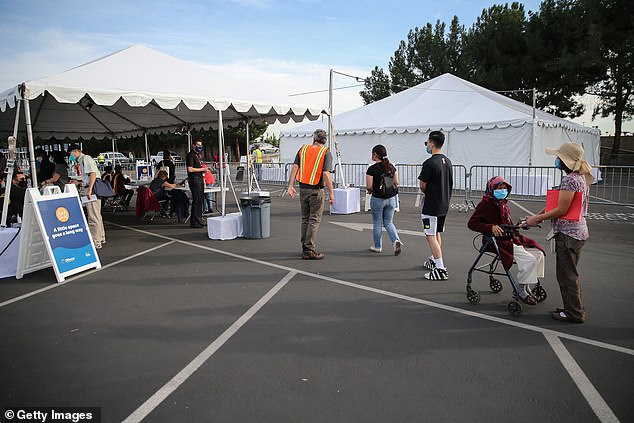 Long lines for vaccines have also formed in California, as pictured above Wednesday 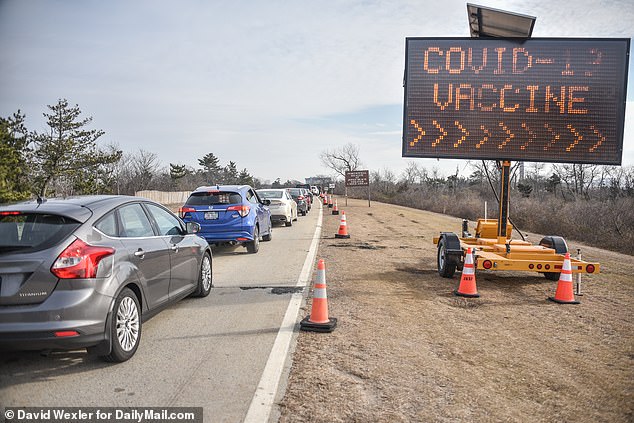 The D.C. Health department also appeared to approve of the no-waste approach.

‘Pharmacists should follow our guidance, if doses will expire due to missed appointments, they should administer the vaccine to anyone who wants to take it,’ a spokesperson told the Atlantic.

Cases of vaccine doses being handed out at random from supermarket pharmacies have also been identified in other states although not at the frequency of D.C. with its no waste policy.

Andrew Masterson and his wife, who is undergoing chemotherapy for stage 4 cancer, received a dose of the Pfizer vaccine at a Kentucky Walgreens on Christmas Eve after hearing about an extra dose by word of mouth.

‘[A friend] called us, and we ran right up. It was pure luck,’ Masterson told the Louisville Courier-Journal.

A Walgreens spokesman told the paper that the leftover doses were handed out despite the pharmacy chain only having been contracted to supply vaccines to long-term care facilities in Kentucky. 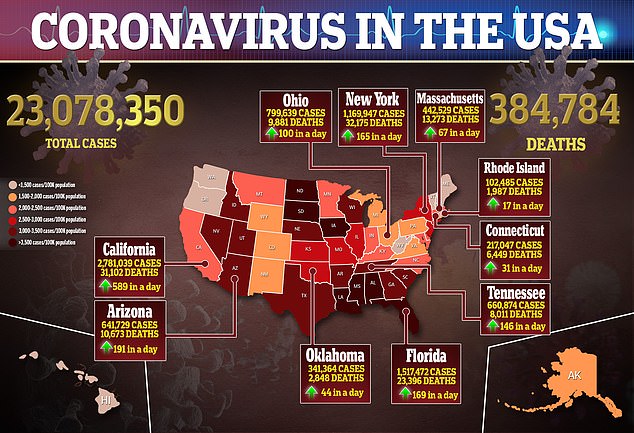 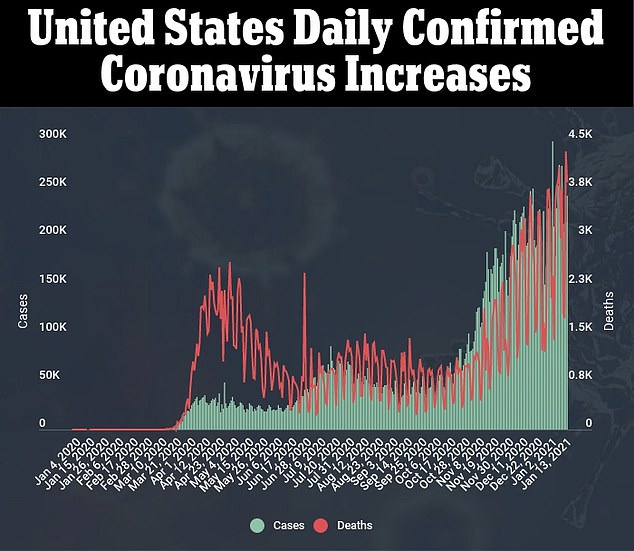 The spokesperson said that on December 24, ‘the amount of vaccine doses requested by facilities exceeded the actual need,’ but that it was a singular occurrence.

Gov. Andy Beshear criticized the actions of the pharmacy claiming it ‘should it have been done differently’.

It comes after the federal government failed to specify what should be done if there are more thawed doses than eligible recipients.

Many states have also failed to plan after they were left with little time to do so because Congress only allocated $9billion to vaccine distribution in late December, leading to some providers taking matters into their own hands.

Meedie Bardonille, a nurse and the chair of the D.C. Board of Nursing, told DCist that she approved of extra vaccine being handed out if needed.

‘It’s kind of like if you thawed out a packet of hot dogs,’ she said. ‘You’re assuming your friends are coming over to eat, and then three of your friends cancel at the last moment and don’t show up.’ 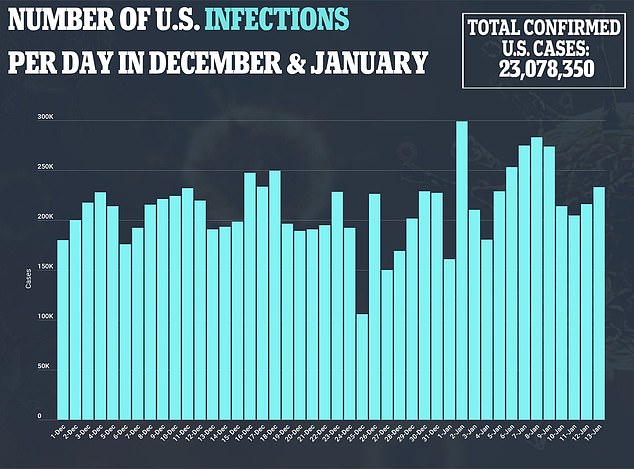 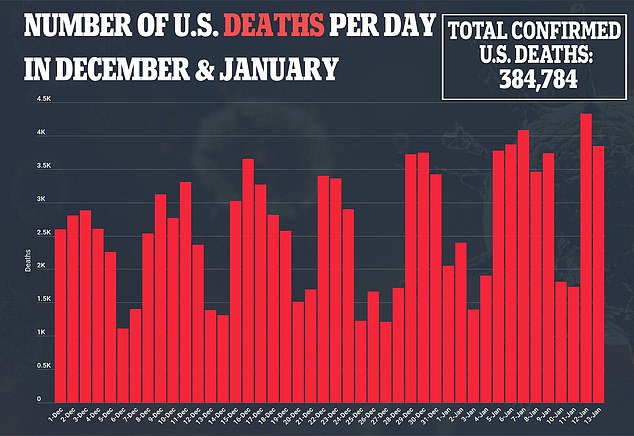 Yet in other states, a better plan is being put in place as desperate hopefuls began to line up.

The system was changed in Florida after news spread that several shoppers at Seminole County’s Oviedo Mall vaccine site had received an extra dose with officials bending the rues to prevent waste.

‘As they were coming through the mall, if they were saying ‘hey, what’s going on here’ we were able to provide vaccinations to those individuals”,’ Seminole County’s head of emergency management Alan Harris told Fox 35.

‘We had to deviate from the priority 1A, but we felt that it was more important to vaccinate and save those individual’s lives than to obviously discard it’.

However, a new plan was developed shortly afterward.

‘We also prevent people from coming out and getting their heartbroken because there is just nothing for them at the end of the day,’

The federal government has been criticized for its vaccine rollout with more than 27 million doses sent to distributors so far, but only 9 million people having received at least one dose.

Nationwide, more than 23 million Americans have been infected with coronavirus and the death toll stands at 384,784.

Which Americans Can Get a Covid-19 Vaccine Now? Full Guidance