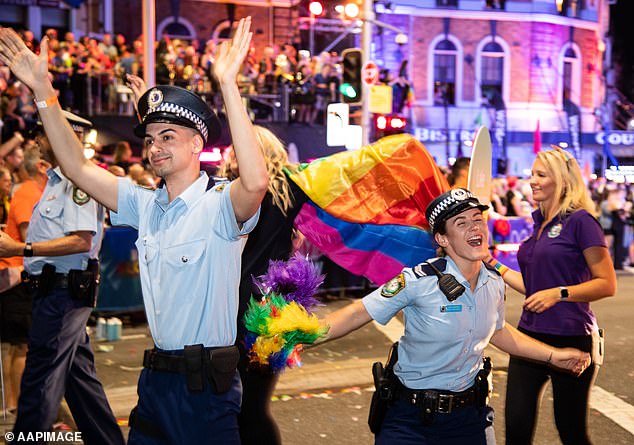 Members of the Sydney Gay and Lesbian Mardi Gras will debate banning police and prison officer floats from the famous pride parade at the organisation’s annual general meeting on Saturday.

The proposal has been put forward by Pride in Protest, an activist group seeking to steer the world-famous event back to its radical roots.

They say police’s presence in the march makes Indigenous people feel unsafe to participate, in light of the high rates of incarceration and over-policing that are the focus of the Black Lives Matter movement. 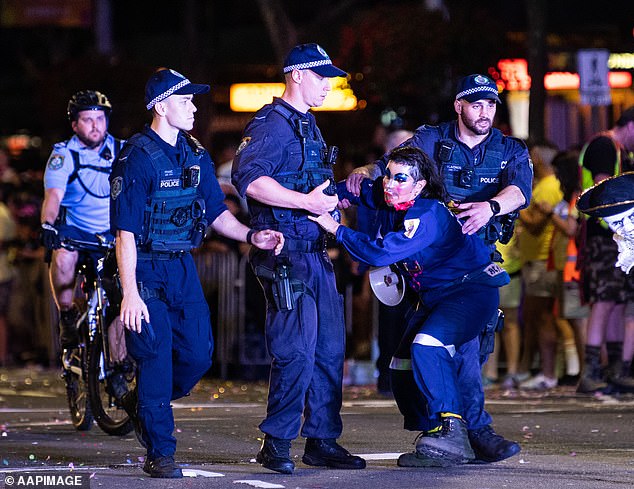 A protestor being removed from the parade route by the police ahead of the Liberal Party float during in the 42nd annual Gay and Lesbian Mardi Gras parade in Sydney, Saturday, February 29, 2020.

‘The Black Lives Matter movement has inspired a global responsibility of every human to recognise the damage and the enormous human life cost that comes at the hands of the police,’ Pride in Protest organiser Bridget Harilaou said.

Mx Harilaou is a prominent activist who helped mobilise protesters to the Black Lives Matter rallies in Sydney earlier this year.

Mx Harilaou was one of dozens of protesters herded into Central Station by police, which resulted in violent clashes. She has also been arrested at refugee protests.

The Mardi Gras board said in a statement that excluding ‘groups or individuals who are lesbian, gay, bisexual, transgender, intersex and queer from the Sydney Gay and Lesbian Mardi Gras events based on their career, association, political affiliation or the banner they wish to march under does not align with our intrinsic, core value of inclusion.’

The move is opposed by the Mardi Gras board, which says it would run counter to the event’s ‘core value’ of inclusion. 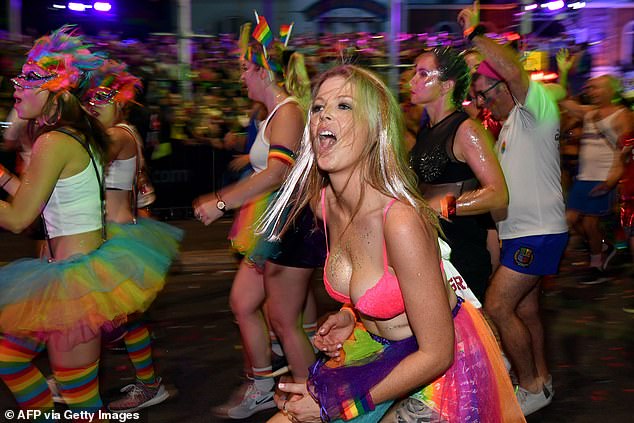 Participants march in the annual Gay and Lesbian Mardi Gras parade in Sydney on February 29, 2020 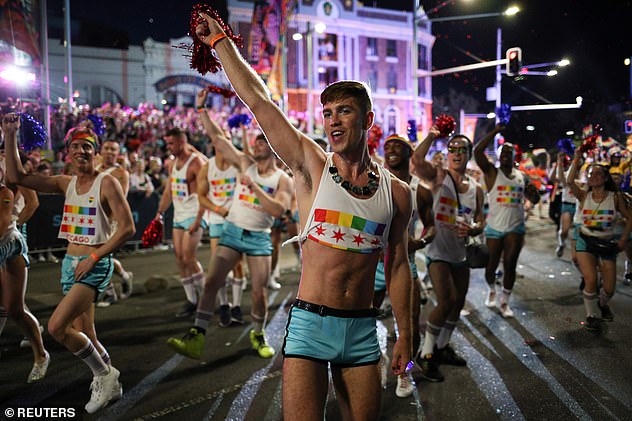 Pride in Protest members will put forward seven other motions at the AGM, including bids to formally disinvite Liberal leaders Scott Morrison and Gladys Berejiklian from attending the parade (Pictured: 42nd anniversary of Mardi Gras)

Pride in Protest members will put forward seven other motions at the AGM, including bids to formally disinvite Liberal leaders Scott Morrison and Gladys Berejiklian from attending the parade.

They also want Mardi Gras to show solidarity with the Black Lives Matter movement by supporting calls to defund police and abolish prisons.

The Pride in Protest group is seeking to expand its share of the organisation’s eight board positions after winning a spot in 2019. Four candidates are running under the group’s branding.

The motions would not formally bind the organisation if they garnered a majority of votes, but Pride in Protest argues the board should follow the wishes of its membership. 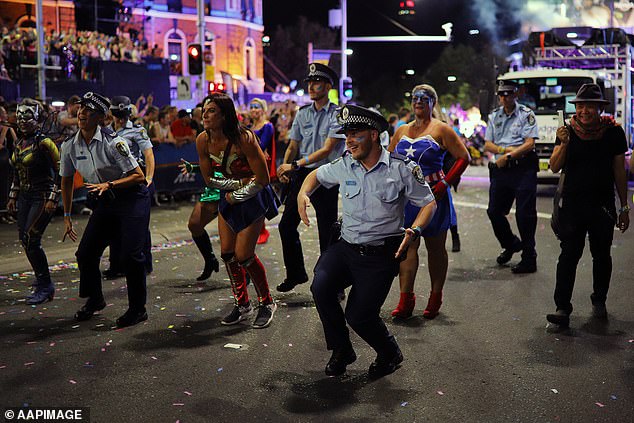 The NSW Police Force’s Corporate Sponsor for Sexuality, Gender Diversity and Intersex, Assistant Commissioner Gelina Talbot, said the force was committed to continuing to march in the parade, as it has done since 1996.

She also stated that marching demonstrated its support for its LGBTIQ employees and the broader queer community.

‘We acknowledge our history, and therefore the importance of working closely with the community and in participating in the Mardi Gras Festival, to reduce barriers to reporting crime, and to publicly and proudly state our support for the LGBTIQ community,’ Ms Talbot said in a statement.

Due to the Covid-19 pandemic, the 2021 Mardi Gras Parade will take place at the Sydney Cricket Ground on March 6.

An estimated 5000 people are tipped to participate in the parade with 23,000 watching on from the stands.

WHO warns virus crisis not over as vaccine rollout approaches