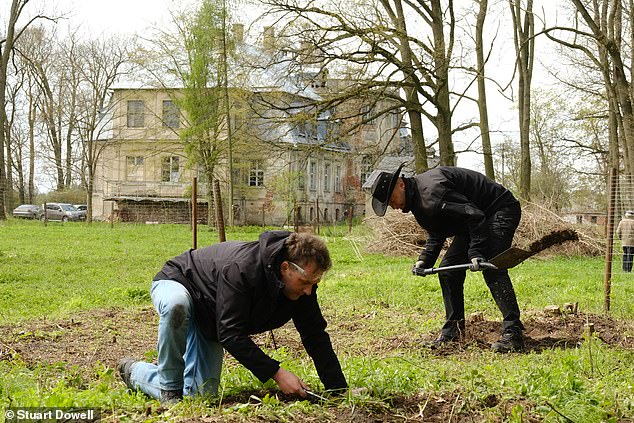 Treasure hunters have started digging for 10 tonnes of Nazi gold at an 18th century palace in southern Poland.

Led by the Silesian Bridge Foundation, the dig in the village of Minkowskie is concentrating on an old orangery in a small area of the 14-hectare palace park.

It is thought treasures, stolen on the orders of SS boss Heinrich Himmler to set up a Fourth Reich, are buried there.

A team of specialists will carefully remove layers of earth by hand as it is also being treated as an archaeological site to uncover the foundations of the orangery.

Treasure hunters have started digging for 10 tonnes of Nazi gold at an 18th century palace in Minkowskie, southern Poland 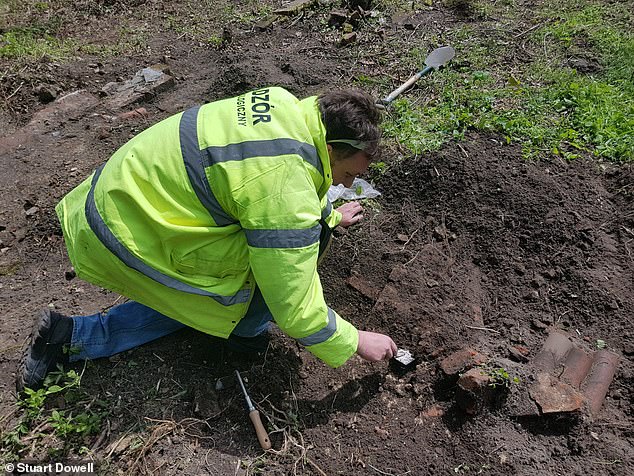 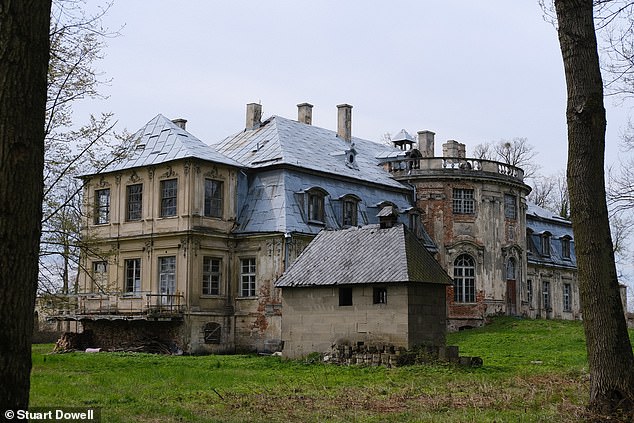 Roman Furmaniak from the Foundation said: ‘We know we are looking in the right place because the foundation spoke several times to Inge before she died and she told us to look here.

‘We will dig to a depth of 5 metres. The site was secured by specialists 75 years ago, so we need specialists now to uncover it.’

He added that they may find five French prisoners of war who are said to have been murdered immediately after helping to dig the hiding place.

The location was revealed by secret documents – an SS officer’s diary and a map –  that the treasure hunters received from the descendants of officers belonging to a secretive lodge dating back over 1,000 years.

Among the bundle of documents is a letter from a senior SS officer calling himself von Stein to one of the girls who worked at the palace and who later became his lover.

The officer wrote: ‘My dear Inge, I will fulfil my assignment, with God’s will. Some transports were successful. The remaining 48 heavy Reichsbank’s chests and all the family chests I hereby entrust to you.

‘Only you know where they are located. May God help you and help me, fulfil my assignment.’

A few days prior to the dig, the Foundation said it had stumbled upon a WWII German bayonet in the grounds of Inge’s old house and said this was a clear indication that they are looking in the right place.

Furmaniak said: ‘We know from the Quedlinberg Lodge that Inge had a bayonet and two guns.

‘She would have hidden them because if the Russians found them it would have been very dangerous for her.’ 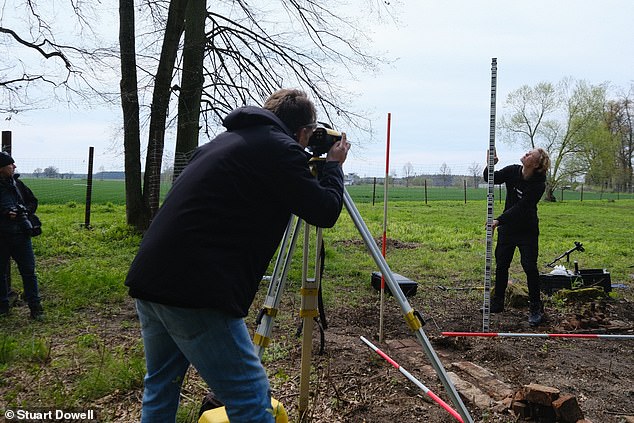 It is thought treasures, stolen on the orders of SS boss Heinrich Himmler to set up a Fourth Reich, are buried at the site 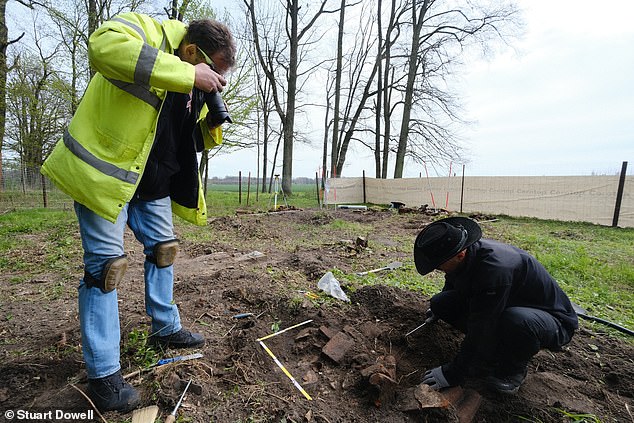 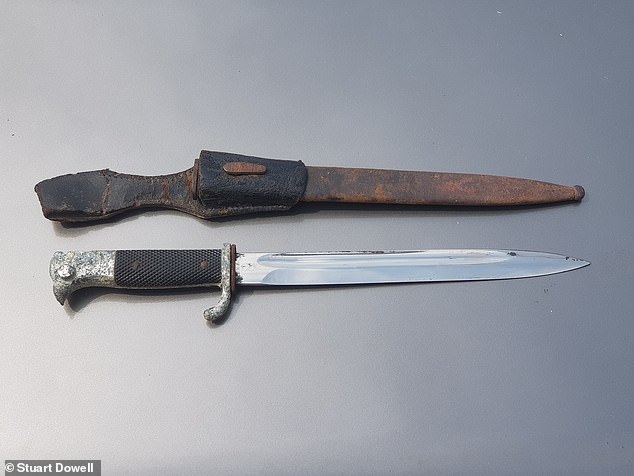 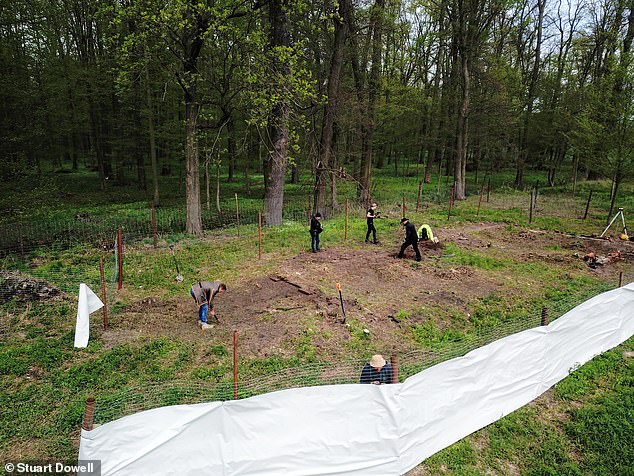 The discovery of the bayonet at the site was, they said, a clear indication they were in the correct place 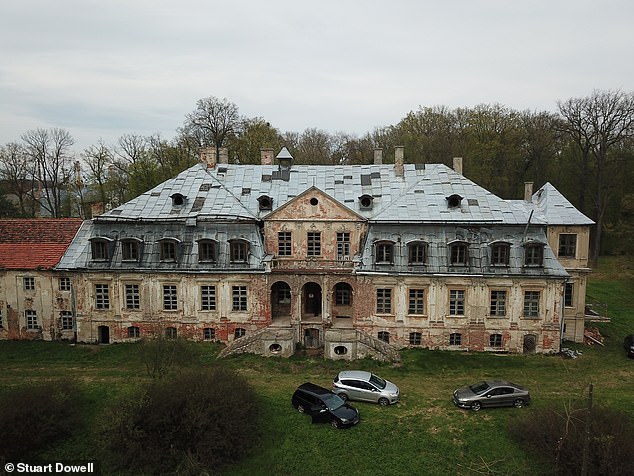 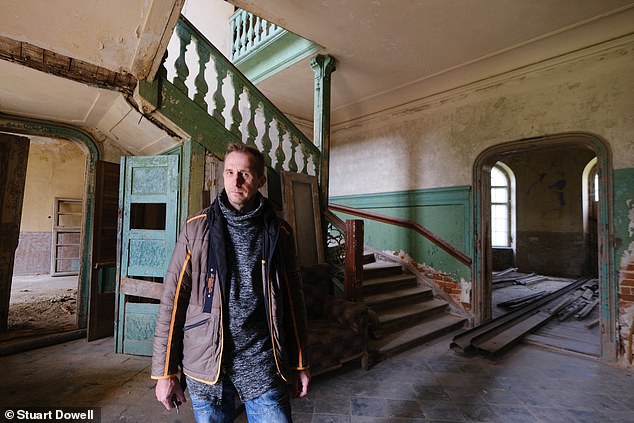 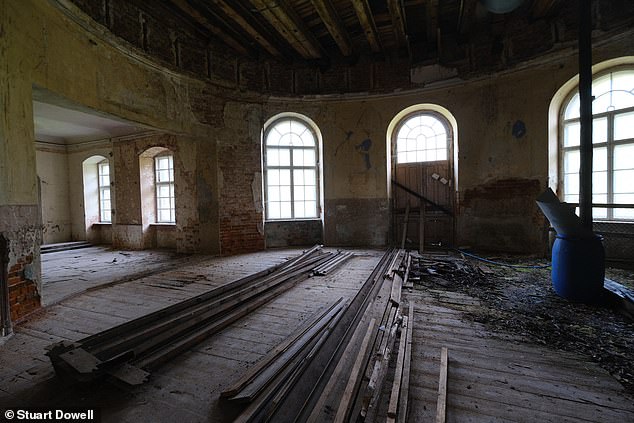 Furmaniak said the Foundation had been led to the site by one of the girls, Inga, who had worked at the palace

The buried treasure is thought to include the so-called ‘Gold of Breslau’ which went missing from police headquarters in what is now the nearby Polish city of Wrocław.

Then a German city, Breslau was one of the wealthiest in Hitler’s Third Reich. But, the impending arrival of the Red Army meant that the Germans had to hide tonnes of gold and valuables.

These included bank deposits from the Reichsbank as well as private German banks, and civilian deposits as the population had been urged to deposit gold, money and jewellery.

According to legend, the treasure was collected in the building of the police headquarters and packed into crates.

It was then transported under an SS guard from Breslau towards what was then the town of Hirschberg, today’s Jelenia Góra in Poland, and then the Sudeten mountains.

But, soon after departing, the trail went dead and the gold has never been seen or heard of since. One of the theories is that it was stolen on Himmler’s orders to go towards the creation of a Fourth Reich. 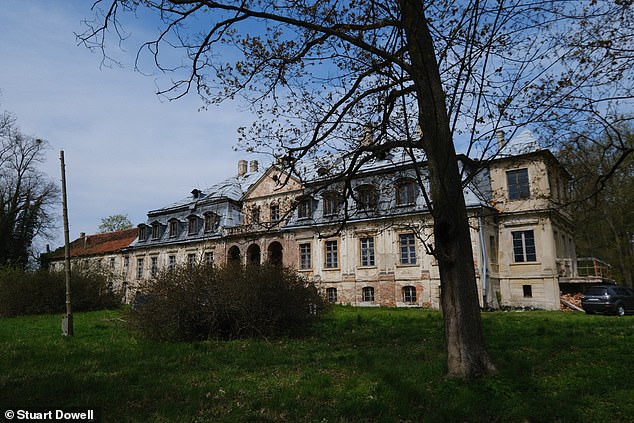 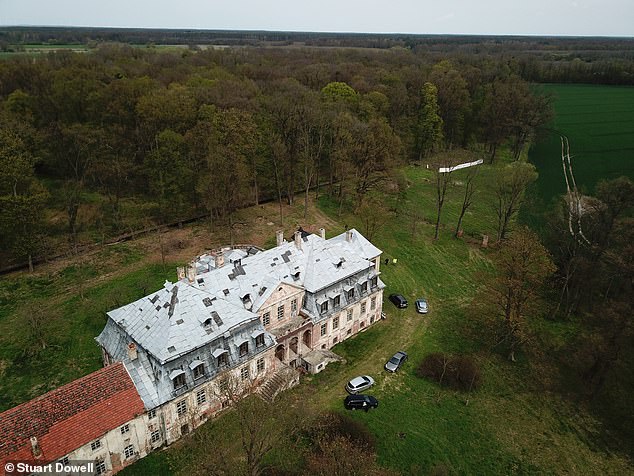 According to legend, the treasure was collected in the building of the police headquarters , packed into crates and taken to a nearby hiding place that could have been the palace 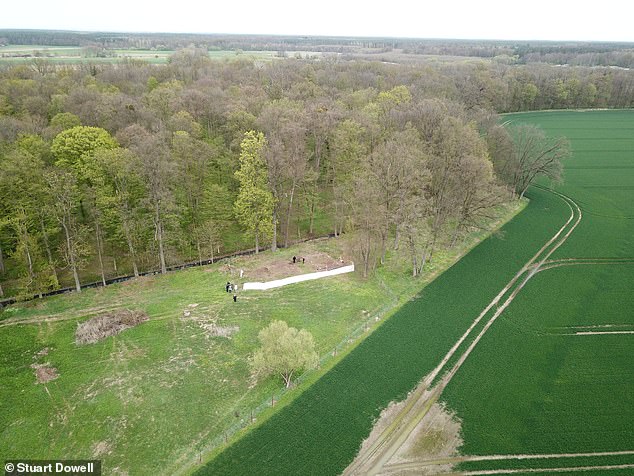 The loot has not been seen since it was transported out of the area by the Nazis, but archaeologists are hoping to uncover it at the site in the village of Minkowskie 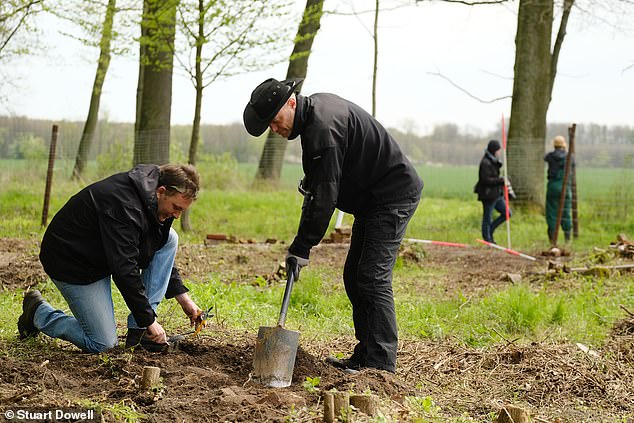 Excavators believe the treasures includes gold coins, medals, jewellery, and valuables given by wealthy people in the city to local Nazi police

Other deposits are said to contain gold coins, medals, jewellery and valuables deposited by wealthy people in the city to the local Nazi police for safekeeping.

The diary describes one cache as containing 47 works of art of international importance, believed to be stolen from collections in France. The loot apparently includes works by Botticelli, Rubens, Cezanne, Carravagio, Monet, Dürer, Rafael and Rembrandt.

Yet another treasure stash is supposed to contain religious objects gathered by Himmler’s Ahnenerbe, which hoovered up sacred items from around the world in an attempt to find evidence for Hitler’s racial theories.

The palace in Minkowskie is the first of 11 sites identified in the documents held by the Foundation, which has taken out a 10-year-lease on the building.

Furmaniak said: ‘We are making preparations as we speak to start digging at the other ten sites, where we expect to find much more.’

He added: ‘We are described everywhere as treasure hunters. In fact we want nothing for ourselves.

‘The goal of the Quedlinburg Lodge and therefore the foundation is to hand these deposits over to their rightful owners in the interests of world heritage and as an act of atonement for the Second World War.’

Excavation work at the palace is expected to continue for most of May. 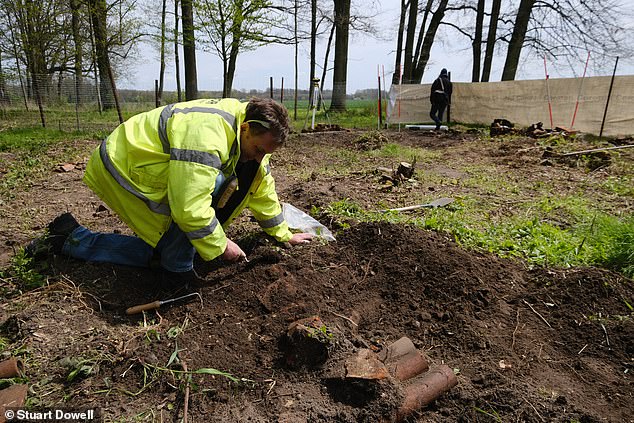 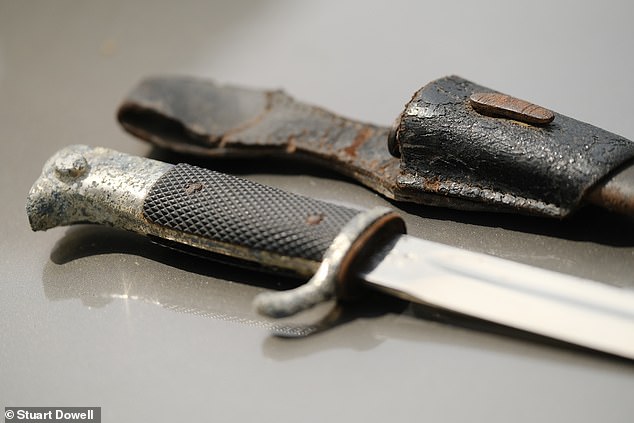 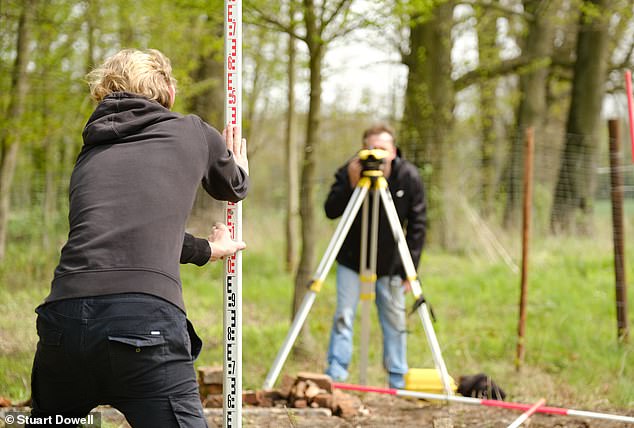