Earth’s Largest Rodents Were Smaller Than We Once Thought 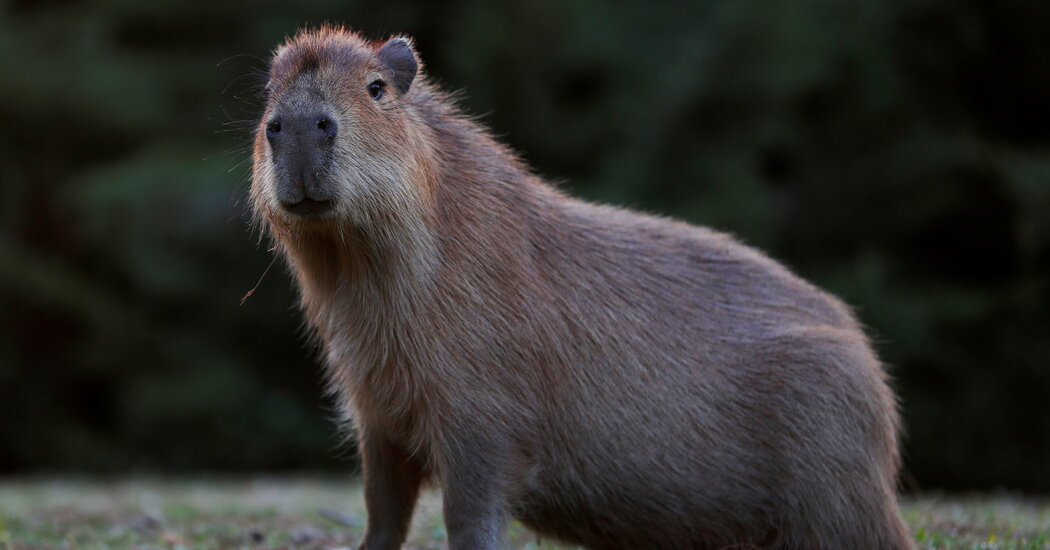 Modern rodents range in size from pygmy mice weighing less than an ounce to stocky capybaras pushing 175 pounds. But even the largest capybara is a pipsqueak compared with some prehistoric rodents that resembled a cross between a supersized capybara and a hairy hippopotamus. Paleontologists estimate that one, Phoberomys pattersoni, may have weighed as much as 1,300 pounds. Another, Josephoartigasia monesi, was believed to be around 2,000 pounds, as big as a bison.

But these size predictions have long sparked debate. “People have said they’re the size of bison, but no one had any methods that could confidently nail down these sizes,” said Russell Engelman, a paleontologist pursuing his Ph.D. from Case Western Reserve University.

So Mr. Engelman proposed a new method for accurately describing the dimensions of these rodents of unusual size. In a study published Wednesday in the journal Royal Society Open Science, he downsized the animals by comparing a joint at the back of the skulls of Phoberomys, Josephoartigasia and other prehistoric rodents with those in large modern mammals instead of their pint-size relatives.

Between two million and eight million years ago, giant rodents like Phoberomys and Josephoartigasia inhabited South America’s wetlands. According to Ernesto Blanco, a paleontologist at Universidad de la República in Uruguay who discovered the Josephoartigasia skull in 2008, these giant rodents had a powerful bite that could generate three times as much force as a modern tiger bite, potentially protecting them from predators like terror birds and saber-toothed marsupials.

Much of our understanding of these rodents is tied to their size. “Body size is a key trait in mammals because everything you cannot physically measure in the fossil like ecology and physiology is correlated with body size,” said Virginie Millien, a zoologist at McGill University who studies the body sizes of rodents and was not involved in the new study. In 2010, Dr. Millien used fossilized femurs to estimate that Phoberomys was the size of a large antelope.

Accurately sizing these gargantuan rodents has proved difficult. One reason is a lack of fossils. While paleontologists have unearthed leg bones and other bits of Phoberomys’s skeleton, Josephoartigasia is known from only a single skull. Without fossil evidence, researchers often rely on the anatomies of an extinct animal’s closest living relatives. However, traits like Josephoartigasia’s prolonged skull and Phoberomys’s bulky femurs are not found in living rodents. Thus, simply increasing the size of a capybara fails to render accurate anatomical estimates, and can yield distorted sizes similar to those seen in a carnival mirror.

So Mr. Engelman turned to the occipital condyle, the joint that helps connect an animal’s skull with its spine. The size of this joint varies little across all mammals to ensure the skull and spine stay securely attached, making it a bellwether for comparing different species. “Usually paleontologists look for traits that are different between animals,” Mr. Engelman said, “but when you’re looking at body size, you want to nail down the parts that have changed the least.”

Recently, Mr. Engelman measured the width of the joint in more than 400 species of mammals, including mice and African elephants. He discovered that the occipital condyle width was an accurate predictor of their dimensions. Because the width of these joints was similar across mammals of a particular size, he could compare the size of the prehistoric rodents’ joints with those of other large mammals without having to extrapolate.

This left Mr. Engelman with drastically decreased sizes: Phoberomys maxed out under 450 pounds, and Josephoartigasia weighed around 1,000 pounds — much closer to the size of a pony than a bison. “If I made every reasonable assumption I could to make the masses higher, I still couldn’t make them as big as people were saying,” Mr. Engelman said. “Even unreasonable assumptions couldn’t get them that big.”

Mr. Engelman also believes that this decrease in brawn may boost these rodents’ brains, which are measly for their perceived size. “They have small brains, but they may not have these ridiculously tiny brains that people think they had,” he said.

Dr. Blanco believes these figures are more realistic than previous estimates of these rodents weighing a metric ton. But he believes more fossil evidence is required before it is certain how large the largest rodents grew. “Even with this excellent method, we’ll have significant uncertainties until we have more than a skull,” he said.

While the new findings are less eye-popping than earlier estimates, Dr. Millien said 1,000 pounds is “still a really big rat.”