England manager Gareth Southgate: ‘Probably a good thing’ to be playing away from home for Euro 2020 quarter-final | World News 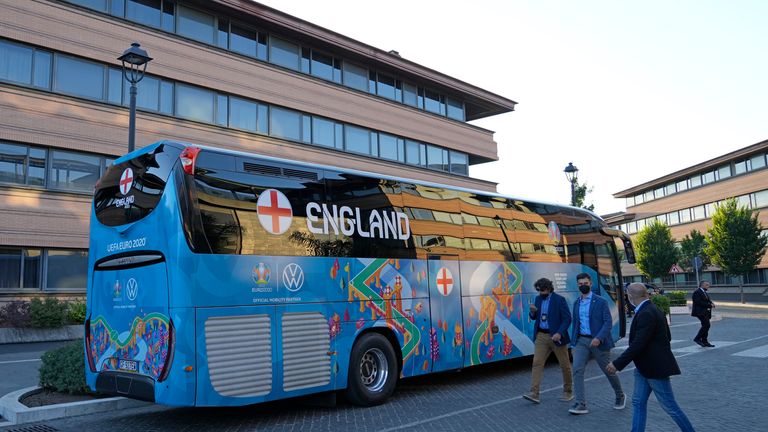 England’s manager Gareth Southgate believes that playing away from Wembley will help the team.

England will play Ukraine this evening at Rome’s Stadio Olimpico, following a 2-0 win against Germany on Tuesday at Wembley.

The Three Lions will be without the bulk of their fans in the stadium, as Britons have been told not to go to Italy for the clash due to coronavirus restrictions.

If Southgate’s men reach the Euro 2020 final, the quarter-final against Ukraine would be their only game away from home.

He said: “I think there was clearly a big emotional toll from the game (against Germany) and everybody enjoyed the day but, even in the dressing room afterwards, the players were already talking about the next game and the need to prepare well,” Southgate said.

“So we have shifted the mindset quickly on to that next challenge.

“We’ve achieved one challenge but that’s not the Everest we set ourselves, really. We want to push on from where we’ve got to now.

“I think the psychological freshness is key. We’ve obviously got a strong squad as well.

“It’s actually, for us, probably a good thing to be going away now. It would’ve been very hard, three days later, to replicate that experience at Wembley.

“So now we’ve got a different sort of test.

England are the favourite to go through to the semi-finals – 4th in the FIFA world rankings compared to Ukraine’s 24th.

Ukraine beat a 10-man Sweden in extra time on Tuesday and are in just their second major tournament semi-final.

Southgate, however, said they are “a good side”, telling UEFA: “I’ve been really impressed with what (Ukraine manager) Andriy Shevchenko’s done with them.

“They had a couple of sticky results through the autumn, through the Nations League but they’ve bounced back, and they got a very good result in France, in the World Cup qualifiers and, again, this week against Sweden.

“So if we give them space to play, they’ll play, and they’ve got some dangerous forwards.”

The Football Association was allocated 2,560 tickets – 16% of the stadium’s reduced capacity of 16,000 – but these will not be used and will go on general sale instead.

Italy is on the government’s amber list for travel, meaning fans would have to isolate for 10 days on their return to the UK, as well as completing a number of COVID-19 tests.

Rules in Italy would also mean arrivals from the UK would need to quarantine for five days and because the venue was not known until after England’s victory over Germany, that would mean they would miss the match.

A spokesman for Prime Minister Boris Johnson said: “Obviously we appreciate how fans will want to do everything possible to support the England team but we do need to balance that against the need to protect public health.

“We would urge everyone to comply with the guidelines and rules that we have in place.”

Firefighter’s daughter, seven, is among the dead after Florida building collapse | US News