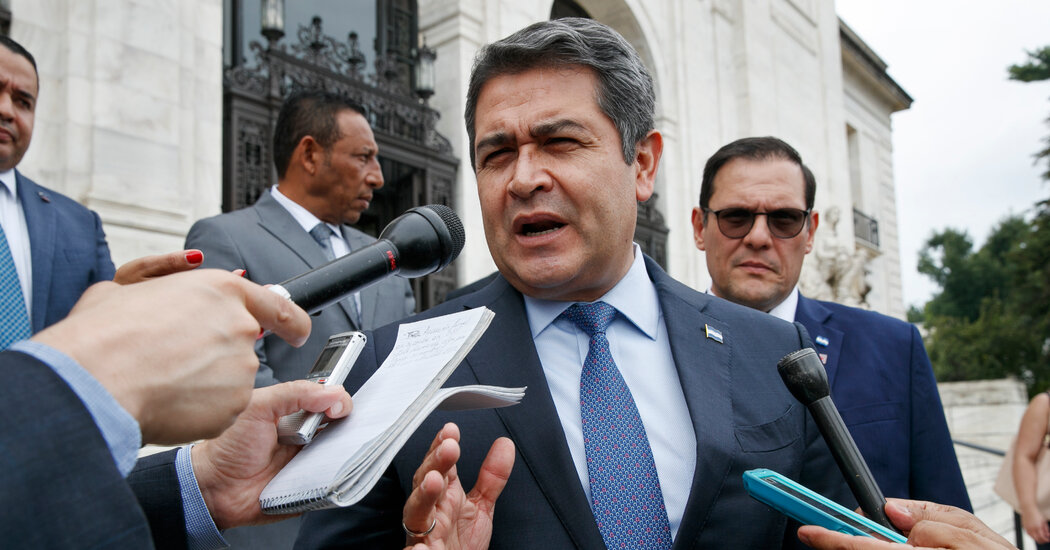 The former Honduran president Juan Orlando Hernández was extradited to the United States on Thursday, where he will face charges in a New York court accusing him of trafficking drugs for decades to further his political career.

About 1:20 p.m., a U.S. Drug Enforcement Administration plane arrived at the Toncontín International Airport in the capital, Tegucigalpa, and almost an hour later, the Honduran minister of defense said Mr. Hernández had been handed over.

A federal indictment unsealed late Thursday in Manhattan charged that over nearly the last two decades, Mr. Hernández “participated in a corrupt and violent drug-trafficking conspiracy to facilitate the importation of tons of cocaine into the United States.”

The indictment charged that Mr. Hernández received millions of dollars from numerous drug trafficking organizations in Honduras, Mexico and elsewhere, including from the former leader of the Sinaloa Cartel, the Mexican drug lord known as El Chapo.

Mr. Hernández used the proceeds of his drug trafficking to “enrich himself, finance his political campaigns and commit voter fraud,” including in connection with the 2013 and 2017 Honduran presidential elections, the indictment said.

Mr. Hernández stepped down in January after completing the two presidential terms allowed by law. Soon after, he was detained at his home in Tegucigalpa, triggering an unsuccessful bid by his lawyers to block the U.S. government’s extradition request.

On the evening of Feb. 14, just minutes after the Honduran Foreign Ministry said it had received the extradition request, police vehicles surrounded Mr. Hernández’s home, and he was led out the next morning in shackles and wearing a bulletproof vest.

“I’m ready to present myself voluntarily and defend myself in accordance with the law,” he said in a post on Facebook that morning. Mr. Hernández has long vigorously denied that he has had any role in drug trafficking.

Last month, a Honduran judge ruled that Mr. Hernández should be extradited to the United States, and his appeal to the country’s Supreme Court was unsuccessful.

On Thursday, about 100 police officers escorted Mr. Hernández from the building to the helicopter that would take him to a military base next to the Toncontín airport. He wore a cap, a blue vest and mask and a pair of handcuffs.

As the helicopter took flight, loud gunpowder detonations were heard throughout the city, with thousands of people celebrating the long-awaited extradition of the former president.

“Justice was done,” said Wendy Sierra, 22, a biology student at the National Autonomous University of Honduras. “He left us poor here, he stole everything and favored drug traffickers, and no one ever touched him. But with the gringos you cannot play.”

Allegations have loomed over Mr. Hernández for years as the U.S. attorney’s office in Manhattan and the D.E.A. conducted a far-reaching narcotics trafficking investigation that exposed corruption at the highest levels in Honduras. The nation of 10 million has become a gateway for huge amounts of cocaine moved through Mexico and into the United States.

In two recent federal trials in Manhattan, testimony placed Mr. Hernández at the center of a drug trafficking operation that relied on members of the Honduran military and national police, sent tons of cocaine into the United States and generated millions of dollars in proceeds that were used on behalf of Mr. Hernández’s National Party in campaigns.

Mr. Hernández, along with his brother, Tony Hernández, a former Honduran congressman, “played a leadership role in a violent, state-sponsored drug trafficking conspiracy,” prosecutors said in a 2021 court filing.

The new indictment charges Juan Orlando Hernández with cocaine importation conspiracy, possession of machine guns and destructive devices and conspiracy to possess them.

Last year, in the trial of a Honduran man who was convicted of conspiracy and weapons charges, an accountant testified that he heard Mr. Hernández, when he was a presidential candidate in 2013, say he would eliminate his country’s extradition treaty with the United States, rendering his associates “untouchable.”

According to the testimony, Mr. Hernández also said, “We are going to stuff drugs up the gringos’ noses, and they’re never even going to know it.”

During the administration of former President Donald J. Trump, even while Mr. Hernández was under investigation, he was treated as an ally on issues of immigration and security. In September 2019, after he agreed to a deal that would allow the United States to force some migrants to seek asylum in Honduras, Mr. Hernández earned a handshake from Mr. Trump during the United Nations General Assembly.

Kevin K. McAleenan, then the acting U.S. secretary of homeland security, said in a tweet at the time that Mr. Hernández was a “strong partner” who was working to “combat irregular migration and transnational criminal organizations.”

Although it is rare for another country’s former head of state to be extradited to the United States to face prosecution, it is not unprecedented. In 2013, Alfonso Portillo, the president of Guatemala from 2000 to 2004, was sent to face prosecution in Manhattan, where he pleaded guilty in a money laundering case and was sentenced to nearly six years in prison.

And Mr. Hernández is not the first former Honduran president to be prosecuted in New York.

Rafael Callejas, who served from 1990 to 1994, surrendered to the U.S. authorities in 2015 shortly after being charged in a sweeping corruption case that involved FIFA, soccer’s international governing body. Mr. Callejas pleaded guilty in federal court in Brooklyn to wire fraud conspiracy and racketeering conspiracy charges; he died in 2020 before he could be sentenced.