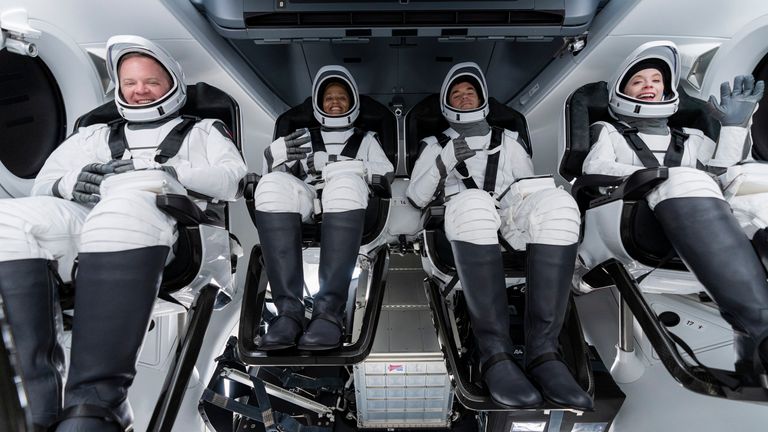 The first all-civilian crew ever to orbit the earth have blasted off on their historic mission.

The Dragon capsule containing the four citizen astronauts was launched atop a SpaceX Falcon 9 from the Kennedy Space Centre in Florida.

The launch is the latest giant leap in a new era of commercial space travel.

One of those aboard the mission, billionaire entrepreneur Jared Isaacman, paid an undisclosed fee to SpaceX for the right to fly with three others.

During its three-day journey the capsule will orbit the earth once every 90 minutes at a speed of more than 17,000mph and an altitude of 360 miles, higher than even the orbiting International Space Station and Hubble Space Telescope.

Isaacman conceived the mission, named Inspiration4, to raise awareness and support for a children’s cancer hospital. He has pledged $100 million personally.

One of his crewmates, Hayley Arceneaux, was diagnosed with bone cancer as a ten-year-old. Now 29 and a physicians’ assistant at that cancer hospital, she is the youngest American ever to visit space and the first with a prosthesis.

Although the craft is being controlled remotely from the ground it does have a designated pilot aboard. Sian Proctor, once a NASA astronaut candidate, is proud of her role aboard.

“There have been three black female astronauts that have made it to space and knowing that I’m going to be the fourth means that I have this opportunity to not only accomplish my dream, but also inspire, and inspire the next generation of women and girls of colour,” she said.

One person not on board is SpaceX founder Elon Musk but the mission is being seen as the next stage of fulfilling his ambition to reach new targets in space.


Why billionaires are going to space

This summer has seen billionaire space tourism rivals Richard Branson and Jeff Bezos reach the edge of space in vehicles they have spent millions building.

But experts say this orbital mission, with SpaceX already the frontrunner in the business of commercial space travel, is of greater significance.

Retired NASA astronaut Ron Garan Jr, who flew missions to the International Space Station aboard the Space Shuttle, told Sky News: “There are no passengers on this mission, they’re not there for minutes, they’re there for days, they have actual mission objectives that they’re trying to achieve, so it’s an order of magnitude more challenging and more risky.

“But this is the dawn of a new era of space travel.”

And that, according to planetary scientist Tanya Harrison, is good news for everyone who wants to go to space. “It is a huge step in showing it’s not just billionaires and their employees going into space but regular people and they’re going farther than we have in decades.”

The crew have have spent five months training for the mission. If all goes according to plan the capsule is due to splash down in the Atlantic in three days.