The five highly-educated girlfriends of a man accused of keeping a sex slave made a lengthy journey to support him in court on Wednesday, only to be turned away when the case got adjourned.

The women – Charlotte, Sophie, Hanne, Hunter and Finlay – entered the New South Wales Supreme Court side-by-side as their boyfriend, James-Robert Davis, applied for bail accused of keeping a woman as a slave and forcing her into prostitution.

They entered and exited the court in a pack, moving in sync before sitting next to one another in front row of the court, all craning to get a good look of their lover on the main screen.

Charlotte, Sophie, Hanne, Hunter and Finlay entered the NSW Supreme Court side by side as their boyfriend, James-Robert Davis, appeared via video link on Wednesday afternoon Five highly educated, sexually adventurous women (pictured) have arrived at the NSW Supreme Court to stand by their man as he languishes in jail accused of keeping a sex slave 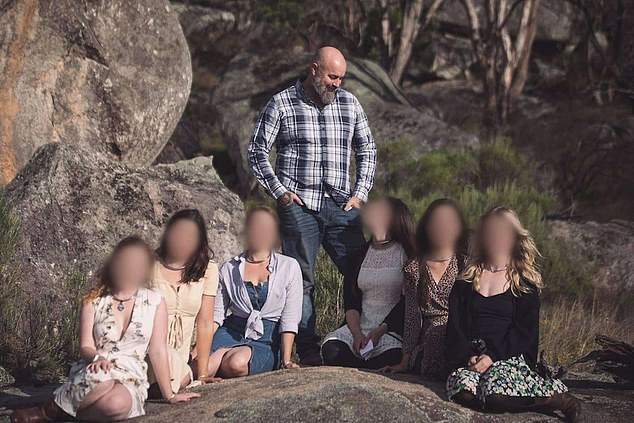 Charlotte, Sophie, Hanne, Hunter and Finlay entered the court side by side to support their boyfriend, James-Robert Davis

The court previously heard each of the women deny allegations that Davis is in the business of keeping women as his slaves.

Davis, a former solider and prison officer and self-proclaimed ‘kinky sex overlord’, is facing charges of possessing a slave, reducing a person to slavery and causing a person to remain in servitude.

He is accused of making a woman sign a contract to enter into slavery, forcing her to wear a steel collar and locking her in a cage for up to three days.

Police allege that woman was subjected to extreme violence and threatened with court action if she broke the contract for indiscretions including going to the toilet without obtaining permission. 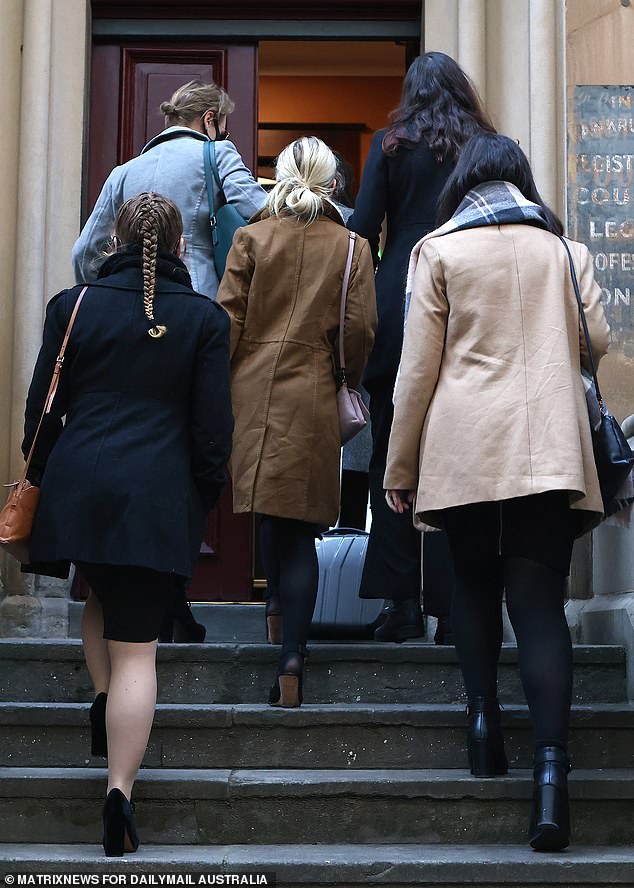 The women, who are all in a polyamorous relationship with Davis, made the six-hour trek from the home they share in Yarrowyck, about 30km outside of Armidale, to put on a united front 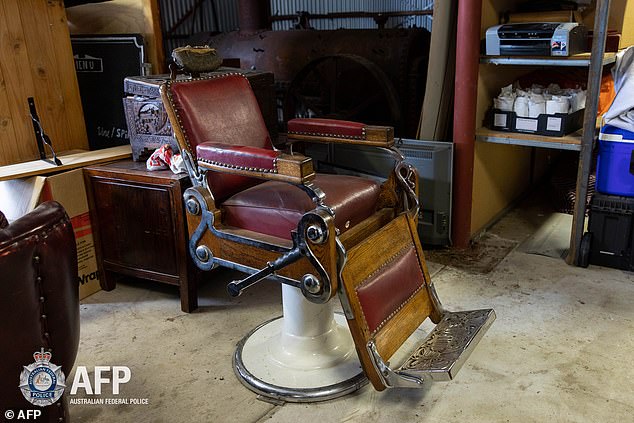 The property also contained a shed which had a barber’s chair and boxes filled with whips, collars and other sex instruments 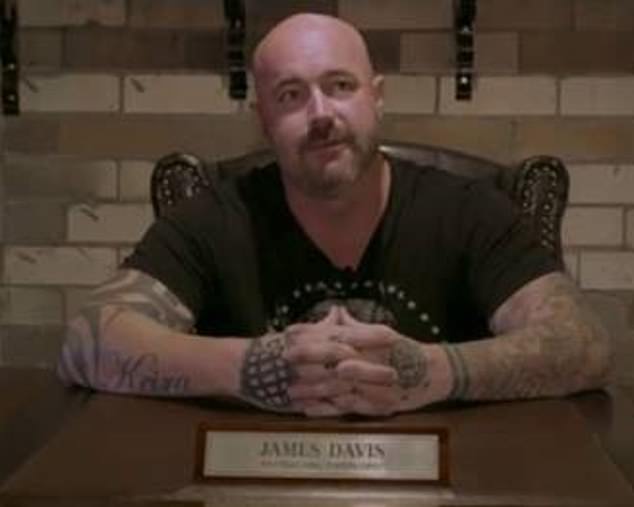 James Robert Davis (pictured), 40, has been charged with slavery offences

None of the charges relate to his present girlfriends, and they all insist they are in a consensual and loving polyamorous relationship with the 40-year-old.

Each of the women is educated, most have stable jobs and they all have access to personal bank accounts, own their own cars and are free to travel however they wish.

Ms Davis is an English as a second language teacher with a Master of Teaching majoring in English and History. None of the charges relate to his present girlfriends, and they all insist they are in a consensual and loving polyamorous relationship with the 40-year-old 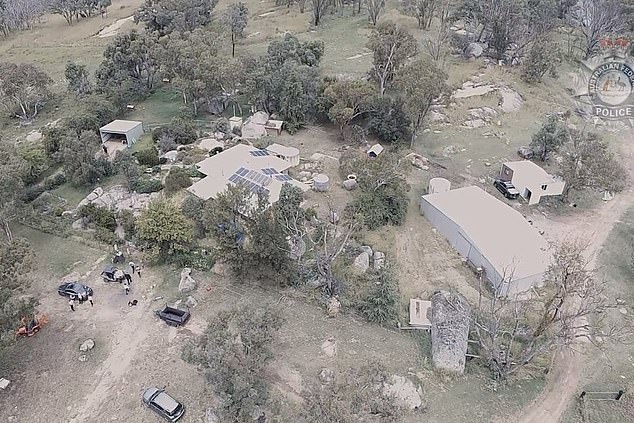 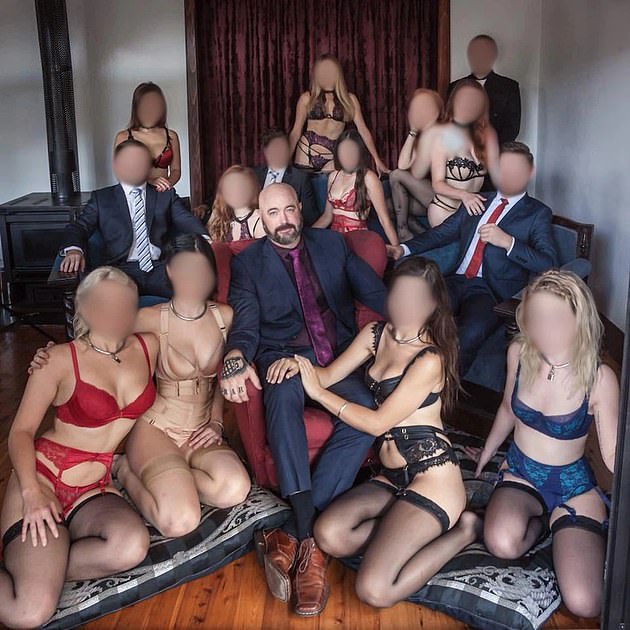 Pictured: Robert James Davis (centre) with lingerie-clad women. He has been charged with slavery offences

The couple are due to give birth to their first child later this year.

Meanwhile Sophie is completing a Bachelor of Laws while Hanne works as a vet nurse.

Finlay is undertaking a finance degree and finally, Hunter is a registered nurse completing a Diploma in Mathematics.

As someone familiar with the make up of the relationship put it; ‘they’re not just some junkies from Mt Druitt who have grabbed onto a sex cult because it’s thrilling.’ Finlay is employed as a laboratory technician while undertaking a Bachelor of Finance and finally, Hunter is a registered nurse and also completing a Diploma in Mathematics 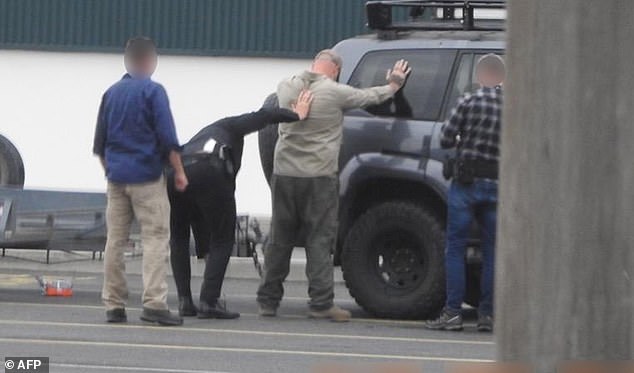 Australian Federal Police vision is pictured of the moment Davis was arrested by officers outside the Bunnings in Armidale, northern New South Wales on Thursday afternoon 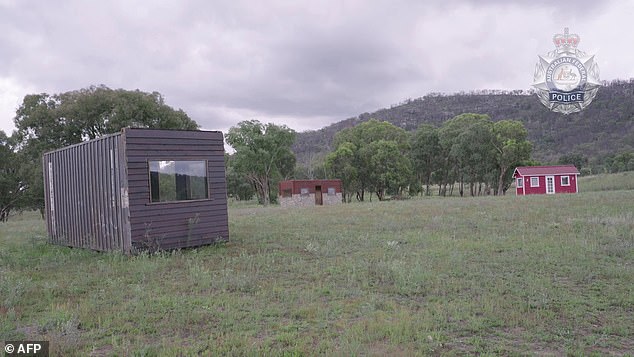 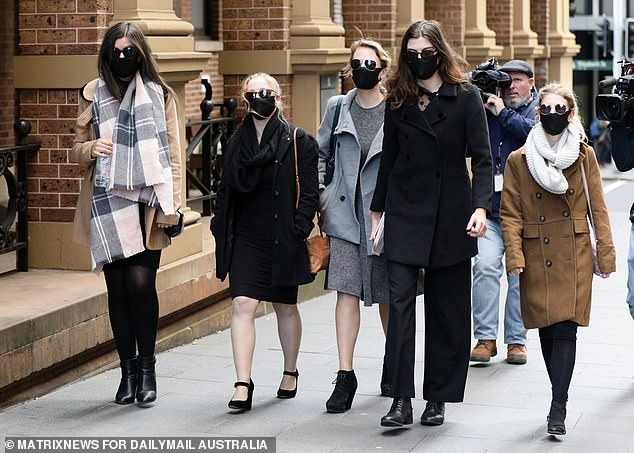 On Wednesday, Davis’ barrister Ian Lloyd QC, supported by solicitor Bianca Barnes, from George Sten & Co, were expected to make a bid for Davis’ bail with his five girlfriends watching from the wings

Instead, they asked the court for a suppression order on the entire case, arguing that their client would not be granted a fair trial due to media scrutiny.

The magistrate admitted it was unlikely the request would be granted, but adjourned the bail application until after she could make a decision on the application of a suppression order.

‘There is obviously significant media interest… I can assume that reflects the wish of the public,’ Justice Helen Wilson said.

Mr Lloyd, who was the state’s Senior Crown Prosecutor before returning to private practice, is representing Davis and will be rigorously defending the charges. 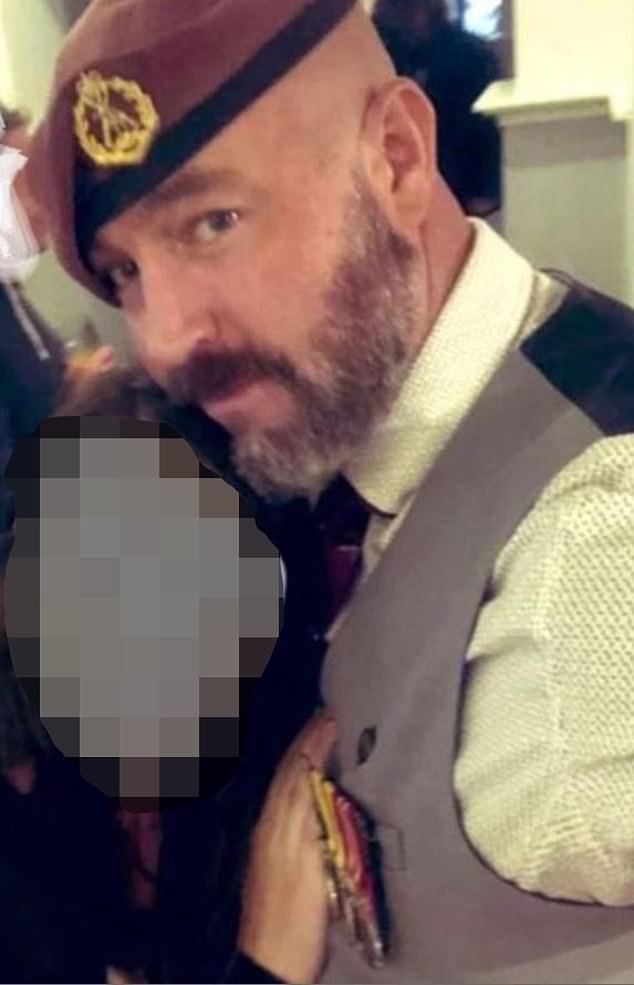 Davis (pictured) spent 17 years with the Australian Defence Force and served in the second Gulf War, the court heard 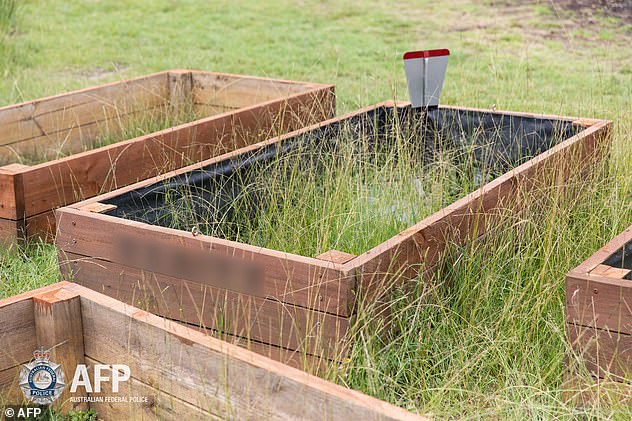 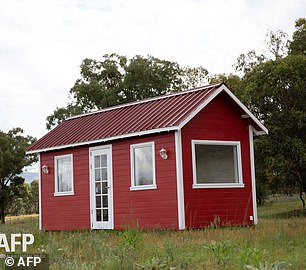 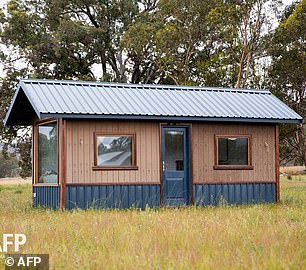 ‘As strange as this case may be, it is very defendable,’ Mr Lloyd said. ‘And it will be strenuously defended because my client has said all along he’s done nothing wrong.’

Davis styles himself as the patriarch of the ‘House of Cadifor’ which includes the five women who have allegedly signed ‘slavery’ contracts.

‘I’m instructed that nothing that has occurred in their interplay with my client is a slave relationship or non-consensual,’ Mr Lloyd said at a previous court hearing. 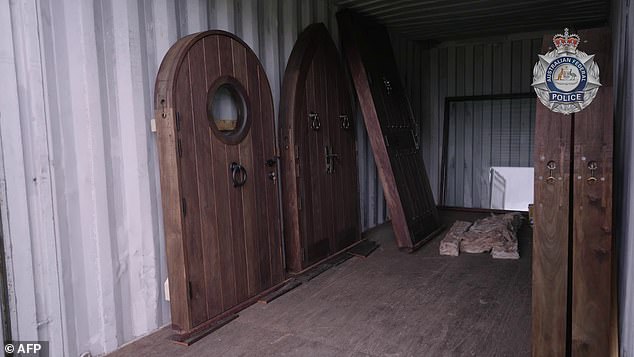 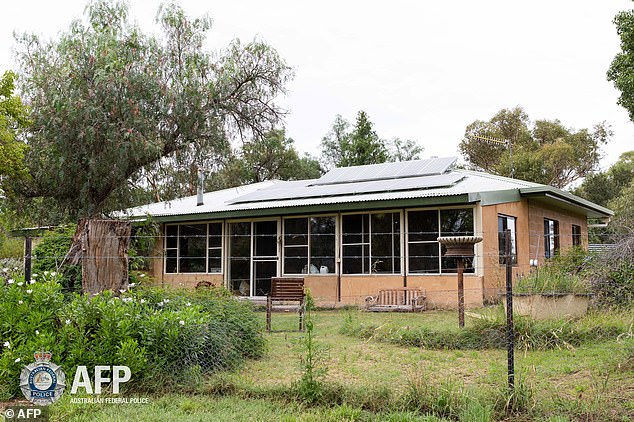 ‘It’s said that when my client’s premises were raided a cage was seen. I’m instructed that, as much as a cage may have been involved with the complainant, that cage had no bottom, could be lifted up, and one could simply unlock the door by putting one’s arm around through it.’

‘Each of these women — if they’re a slave — has had the opportunity to run away; they have not done so,’ Mr Lloyd said.

‘My client won’t be on trial for being a member of a cult even if, ultimately, that was accepted as a fact,’ Mr Lloyd said, according to The Telegraph.

According to a statement of facts tendered to the court, the alleged victim met Davis met in 2012 when he was in the army and the pair soon began living together at Maroubra in Sydney’s eastern suburbs.

But two months into the relationship Davis allegedly punched her to the ground. He allegedly began isolating the woman from her family and friends and took over handling her finances.

Davis allegedly told the woman she had to wear a ‘submissive collar’, described as a thick stainless steel ring which was secured by an Allen key and worn around her neck at all times.

By the end of 2012 a second woman was allegedly introduced to the relationship, followed by a third. Davis allegedly told the victim she was being promoted to ‘slave’ and asked her to sign a ‘slave contract’ which had accompanying ‘slave protocols’.

‘The accused informed her that the contract was a legally binding contract and if she breached the contract she could be criminally charged in a court,’ the statement of facts said.

Davis allegedly told the woman she was ‘worthless’, ‘broken’ and useless each time she broke the rules.

The woman was allegedly forced to ask Davis for permission to perform everyday activities, including going to the toilet, or face punishment.

One of the punishments was allegedly being hit with a cane until she bled, which had led to permanent scarring.

The woman allegedly had to be naked at the front door when Davis returned home and remove his shoes so she could kiss his feet.

Police will allege Davis choked the woman to the point of unconsciousness multiple times and locked her in a cage for two nights and three days in a row.

‘While the victim was in the cage he would assault her by repeatedly ramming a pole through the bars of the cage and into the victim,’ the statement of facts said.

In 2014 the couple moved to Emerald in Queensland where Davis worked as a security guard for a strip club and the woman worked as the madam, allegedly without being paid.

‘The accused forced the victim to have her slave number tattooed on her body,’ the statement of facts said. ‘The victim recalls the slave number started with S/N 95, followed by a unique number.’

Davis is also accused of coercing the woman into prostitution without payment when the pair moved back to Sydney in 2015 and the woman began work in a Surry Hills brothel.

The woman allegedly worked at the brothel six nights a week and was paid cash which Davis allegedly collected from her each morning.

In 2015 the woman escaped and moved into share accommodation, according to the statement of facts.

DaBaby dropped by BooHoo as Elton John hits out at…