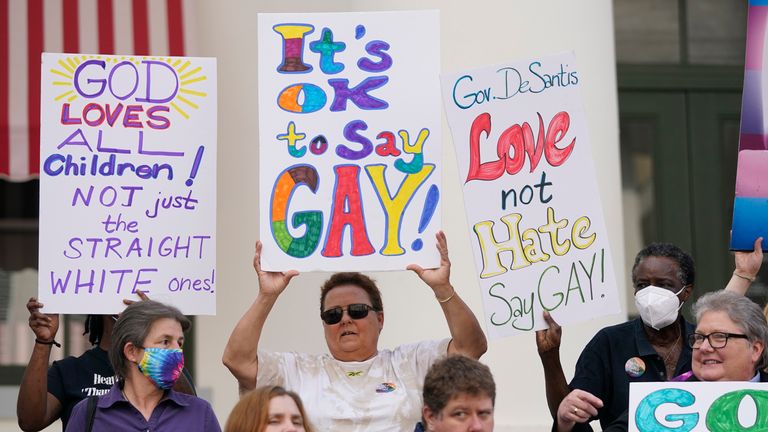 The Florida Senate has passed a bill that would dissolve the special taxing district that allows Walt Disney Co to self-govern in its theme park area.

The Republican-led Senate voted 23 to 16 to back the measure.

The bill comes amid a feud with the giant over its opposition to a contentious new state law which limits discussion of LGBTQ issues in schools.

Disney’s special status, which was granted in 1967, allows the company to self-govern by collecting taxes and providing emergency services.

The proposal could have huge tax implications for Disney, whose series of theme parks transformed Orlando into one of the world’s most popular tourist destinations.

Florida Governor Ron DeSantis wrote in a campaign fundraising email on Wednesday, that “if Disney wants to pick a fight, they chose the wrong guy”, adding that he will “not allow a woke corporation based in California to run our state”.

The measures, pushed by Mr DeSantis, mark an intensification of his ongoing feud with Disney after the company said it would suspend political donations in the state and was committed to supporting organisations working to oppose the ‘Don’t Say Gay’ law.

The law, signed by Mr DeSantis last month, bans lessons on sexual orientation and gender identity to children under the age of nine and has been condemned by critics who say it marginalises LGBTQ people.

However, supporters who back the policy say it is reasonable and that parents should address such topics with children, not teachers.

How would the bill impact Disney?

The entertainment giant controls about 25,000 acres in the Orlando area, and the district allows the company to build new structures and pay impact fees for such construction without the approval of a local planning commission.

The bill would eliminate the Reedy Creek Improvement District, as the Disney government is known, as well as a handful of other similar districts by June 2023.

Mr DeSantis has hinted in the last few weeks that he wants to do away with Disney’s protections, saying he doesn’t “support special privileges in law just because a company is powerful”.

The bill still has to clear the House before it heads to Mr DeSantis’s desk, who in a surprise move, asked politicians to consider the legislation during a special session he called this week.

It comes as a Disney heir, Charlee Disney, the daughter of Roy P Disney who is the great-nephew of Walt Disney and the co-founder of Walt Disney Co, recently came out as trans.

However, the company came under fire for initially failing to take a public stand against Florida’s ‘Don’t Say Gay’ law, which led to staff walkouts.

The move to strip Disney of self-governing status signals the latest blow in a culture war harnessed by Mr DeSantis as he runs for re-election, through staunch opposition to liberal policies on race, gender and abortion.