Florida shooting: Mother and baby among four killed – as suspect in gunfight with police | US News 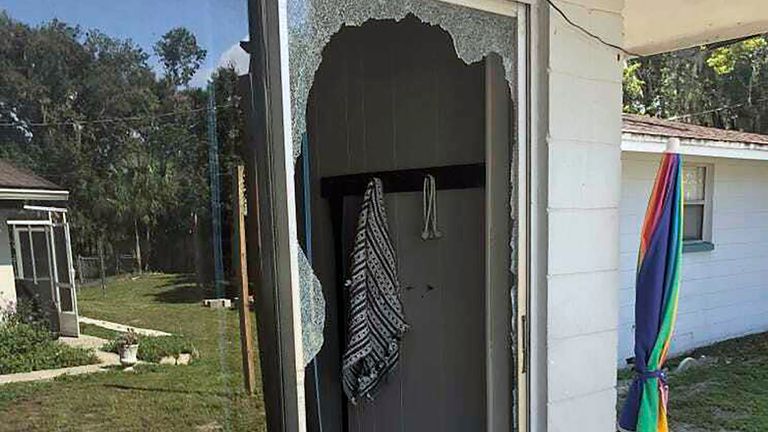 Four people have been shot dead, including a baby being cradled in its mother’s arms, after attacks at two separate houses in Florida which sparked a gun battle with police.

The unnamed suspect, who surrendered after being injured during the shootout, was so aggressive he attempted to grab an officer’s gun while being treated in hospital, according to authorities.

An 11-year-old girl was found inside one of the homes in Lakeland suffering from gunshot wounds.

Also inside the house were the bodies of a man as well as a woman with an infant. Another woman in a nearby property was also killed.

Authorities were originally called to the first house around 7.30pm on Saturday, nine hours before the shooting, when a woman reported a “strange person” who said to her that God told him to speak to one of her daughters.

A sheriff’s deputy arrived within six minutes but could not find the man or his vehicle.

Then at about 4.30pm on Sunday an officer heard popping noises and all law enforcement in the area was sent to the scene.

Outside the first property, which had been “booby-trapped”, the suspect was wearing full body armour, including a bulletproof vest, “as if he was ready to engage us all in an active shooter situation”, said Polk County Sheriff Grady Judd.

Officers did not see a gun at the time, and the man ran inside when they came closer, he said.

“We heard another volley [of gunfire], and a woman scream and a baby whimper,” according to Sheriff Judd.

“Our lieutenant tried to make entry into the front of the house and it was barricaded.”

The lieutenant ran around the back and got into a gun battle with the suspect.

Mr Judd said three deputies at the front of the house were pinned down by gunfire from the suspect, and other agents at the scene opened fire to help the deputies get to safety.

Dozens “if not hundreds of rounds” were exchanged, he said.

The suspect eventually came out with his hands up, after being shot once, and was taken into custody.

The 11-year-old girl was treated in a Tampa hospital. Mr Judd said authorities were still searching for another young girl, “about 10 or 11 years old”.

No police officers were injured in the shootout.