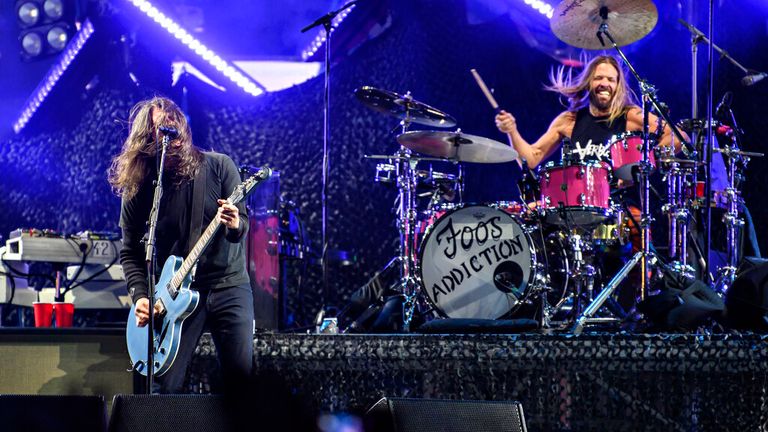 The Foo Fighters have announced two “all-star” tribute gigs in London and LA in memory of drummer Taylor Hawkins following his death.

Hawkins, 50, had been with the rest of the band in the Colombian capital of Bogota when he died in March ahead of a planned festival performance.

In a statement, the Foo Fighters – Nate Mendel, Chris Shiflett, Pat Smear, Rami Jaffee and frontman Dave Grohl – said they wanted to pay tribute to their bandmate and “beloved brother” by celebrating his talent.

“As one of the most respected and beloved figures in modern music, Taylor’s monolithic talent and magnetic personality endeared him to millions of fans, peers, friends and fellow musical legends the world over,” they said.

“Millions mourned his untimely passing on 25 March, with passionate and sincere tributes coming from fans as well as musicians Taylor idolised.

“The Taylor Hawkins Tribute Concerts will unite several of those artists, the Hawkins family and of course his Foo Fighters brothers in celebration of Taylor’s memory and his legacy as a global rock icon – his bandmates and his inspirations playing the songs that he fell in love with, and the ones he brought to life.”

The shows will take place at London’s Wembley Stadium on 3 September and LA’s Kia Forum on 27 September, with line-up details to be announced shortly.

After the Foo Fighters’ summer tour was cancelled in the wake of Hawkins’ death, these shows will mark their return to their stage.

The drummer’s wife Alison Hawkins shared a statement about the gigs, saying: “As Taylor’s wife, and on behalf of our children, I want to share how much you meant to him and how dedicated he was to ‘knocking your socks off’ during every performance.

“Taylor was honored to be a part of the Foo Fighters and valued his dream role in the band every minute of his 25 years with them.”

She said the concerts would take place “in celebration of his life” and to honour his legacy.

Hawkins joined Foo Fighters in 1997, taking on the sticks behind former Nirvana drummert turned band frontman Grohl, after previously touring with Alanis Morisette. He first appeared with the band on tour supporting their second album The Colour & The Shape before making his recorded debut on 1999’s There Is Nothing Left To Lose.

Hawkins went on to play on every subsequent album, and occasionally took over lead vocal duties on songs such as Cold Day In The Sun and Sunday Rain. He was also known for coming to the fore to sing during gigs, often singing Queen songs in tribute to his musical heroes.

As a member of Foo Fighters, he was a 15-time Grammy winner and member of the Rock & Roll Hall of Fame and had several solo and side projects. More recently, he starred with the band in their spoof horror film Studio 666.

“He lived and loved music to an insatiable degree,” the band said in their statement.

Hawkins’ cause of death has not yet been announced, although a preliminary toxicology report showed traces of 10 substances in his body, including opioids and marijuana.

Tickets for the shows in his memory will go on sale on 17 June.

Brett Kavanaugh: Armed man who wanted to kill US Supreme Court justice arrested near his house in Maryland | US News