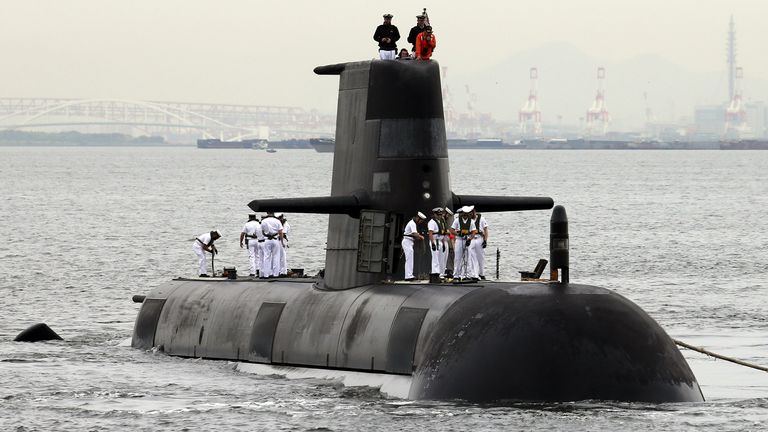 France has accused President Joe Biden of stabbing it in the back and acting like predecessor Donald Trump after Paris was snubbed from a $40bn (£29bn) defence deal it had signed with Australia.

On Wednesday, the United States, Britain and Australia announced they will establish a security partnership for the Indo-Pacific that will help Australia acquire US nuclear-powered submarines.

The deal, dubbed AUKUS, will see Australia scrap its 2016 agreement with French shipbuilder Naval Group to build a new fleet to replace its ageing Collins submarines.

“This brutal, unilateral and unpredictable decision reminds me a lot of what Mr Trump used to do,” foreign minister Jean-Yves Le Drian said on franceinfo radio.

“I am angry and bitter. This isn’t done between allies.”

“It’s a stab in the back. We created a relationship of trust with Australia and that trust has been broken,” Mr Le Drian added.

He had previously said in a statement the “choice to exclude a European ally and partner such as France” was something the country “can only note and regret”.

London, Canberra and Washington have said they will seek to collaborate in cyber, quantum technologies and artificial intelligence, as well as other underwater capabilities.

Defence Secretary Ben Wallace told Sky News on Thursday: “We have no intention of doing anything to antagonise the French – the French are some of our closes military allies in Europe, we are sizable and comparable forces and we do things together.”

He added: “The French were contracted to deliver diesel submarines and the Australians took a decision they wanted to switch out of that and into nuclear.


Questions are being asked over whether Joe Biden forgot the name of the Australian PM Scott Morrison during a news conference.

“Each country has to make those choices in their own national security interests.”

Nuclear-powered submarines are superior to their diesel counterparts as they can operate more quietly and stay underwater for longer.

How the collaboration will work, what it will cost, how many boats will be built, where and which companies will be involved has not yet been revealed.

However, just two weeks ago the Australian defence and foreign ministers had reconfirmed the deal to their French counterparts.

But the agreement had been beset with issues and delays, due to Canberra’s requirement the majority of manufacturing and components be sourced locally.

Mr Biden said France remained a “key partner in the Indo-Pacific zone”, while Australian Prime Minister Scott Morrison said his country looked forward to continuing to work “closely and positively” with the French, adding: “France is a key friend and partner to Australia and the Indo-Pacific.”

In a joint statement, the pair along with Britain’s Prime Minister Boris Johnson said: “The endeavour we launch today will help sustain peace and stability in the Indo-Pacific region.

“For more than 70 years, Australia, the United Kingdom, and the US have worked together, along with other important allies and partners, to protect our shared values and promote security and prosperity. Today, with the formation of AUKUS, we recommit ourselves to this vision.”

Although the word “China” was not mentioned specifically, the predominant security and defence challenge in the region is the rise of an increasingly assertive, authoritarian Beijing.