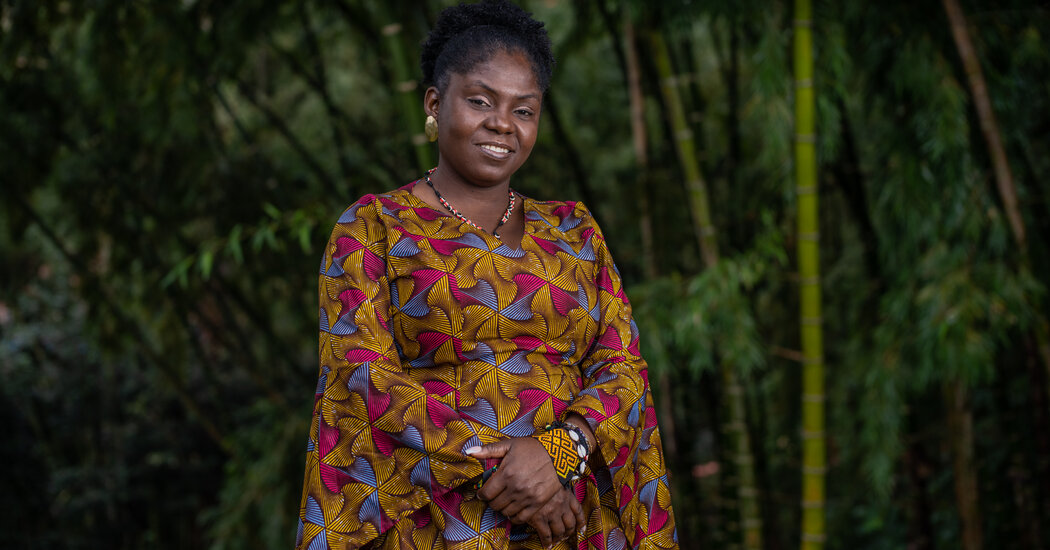 CALI, Colombia — In the streets of Cali, a cradle of Colombian culture and protest, a crowd stretched for blocks, flying white campaign flags and wearing T-shirts that read “the people will not surrender!”

Amid the throng was a famous singer, an important senator, a well-known journalist, a child rapper and a cluster of local dignitaries. But the real celebrity was about to take center stage.

“We love you, Francia!” shouted hundreds of people.

Addressing the crowd, microphone in hand, was Francia Márquez, 40, who once worked as a housekeeper and is now Colombia’s leading vice-presidential candidate as the nation prepares for elections later this month.

For the first time in Colombia’s history, a Black woman is close to the top of the executive branch.

Wearing a printed blue and orange blouse that paid homage to Afro-Colombian style, Ms. Márquez called on the country’s marginalized peoples — Indigenous, Black, rural — to unite. She laid into the elite, who “have condemned our people to misery, to hunger, to desolation,” and evoked the Black Lives Matter movement by appealing to supporters “to break the structural racism that has not allowed us to breathe.”

“The moment has arrived to go from resistance to power!” she shouted before the crowd.

Then she invoked the most Colombian of phrases, as the crowd exploded in cheers: “Que viva la berraquera, carajo!”

In a matter of months, Ms. Márquez, an environmental activist from the mountainous department of Cauca in southwestern Colombia, has become a national phenomenon, mobilizing decades of voter frustration to win third place in a March presidential primary, and compelling the country’s leading presidential candidate, Gustavo Petro, to name her as his running mate.

On the campaign trail, Ms. Márquez’s persistent, frank and biting analysis of the social disparities in Colombian society has cracked open a discussion about race and class in a manner rarely heard in the country’s most public and powerful political circles.

Those themes, “many in our society deny them, or treat them as minor,” said Santiago Arboleda, a professor of Afro-Andean history at the Universidad Andina Simón Bolívar. “Today, they’re on the front page.”

Ms. Márquez’s rise is significant not only because she is Black in a nation where Afro-Colombians are regularly subject to racist insults and treatment and must contend with structural barriers, but because she comes from poverty in a country where economic class so often defines a person’s place in society. Most recent former presidents were educated abroad and are connected to the country’s powerful families and kingmakers.

Despite economic gains in recent decades, Colombia remains starkly unequal, a trend that has worsened during the pandemic, with Black, Indigenous and rural communities falling the farthest behind.

In all, 40 percent of the country lives in poverty.

Ms. Márquez has chosen to run for office, she said, “because our governments have turned their backs on the people, and on justice and on peace.”

“If they had done their jobs,” she said of the political establishment, “I wouldn’t be here.”

To a segment of Colombians who are clamoring for change and for more diverse representation, Ms. Márquez is their champion. The question is whether the rest of the country is ready for her.

Her more generous critics have called her divisive, saying she is part of a leftist coalition that seeks to tear apart, instead of build upon, past norms.

She has never held political office, and Sergio Guzmán, director of Colombia Risk Analysis, a consulting firm, said that “there are a lot of questions as to whether Francia would be able to be commander and chief, if she would manage economic policy, or foreign policy, in a way that would provide continuity to the country.”

Her more extreme opponents have taken direct aim at her with racist tropes, and criticize her class and political legitimacy, expressing sentiments that continue to pervade and sway portions of Colombian society.

In recent weeks, a well-known Colombian singer and television host has called her King Kong; a popular right-wing senator has suggested she should be “coherent” and change her name from Francia, a nation that was a “slaveholding colonizer”; and the head of the senate has called her the candidate of the National Liberation Army, a violent rebel group that claims to defend the poor.

“She has too much resentment to be vice president,” said José Luis Niño, 68, a taxi driver.

“Maybe she should go run a town in Africa,” he said.

Ms. Márquez grew up sleeping on a dirt floor in the community of La Toma, near Colombia’s Pacific Coast, in a region battered by violence related to the country’s long internal conflict. She became pregnant at 16, went to work in the local gold mines to support her child, and eventually sought work as a live-in maid.

Her mother, a midwife, gave birth to her alone, Ms. Márquez said in an interview, because no one else was home.

Ms. Márquez became an activist when she was around 13, amid a proposal to expand a dam project that would have diverted a major river in her region, upending community life. She eventually went on to law school, winning a legal campaign to stop major mining companies trying to move into the area.

In 2014, she drew national attention when she led a 400-mile march from Cauca to Bogotá, demanding that the government stop illegal miners with backhoes who had invaded her community.

The march ended in a sit-in at the Interior Ministry, and an accord with the government. For her work, Ms. Márquez won the Goldman Environmental Prize, sometimes called the “environmental Nobel.”

Colombia’s presidential election is May 29, and it comes at a critical inflection point in the country. For generations, national politics have been driven by opposition to a brutal leftist insurgency, the Revolutionary Armed Forces of Colombia, or FARC.

But in 2016, the insurgents signed a peace deal with the government, laying down their arms and ending a decades-long conflict that had helped conservatives stay in power for so long.

The end of the war between the government and the FARC has since opened space in the political discourse for left-wing movements that cannot be so easily dismissed as violent rebels. And it comes just as the most educated generation in the country’s history comes of age, with many young people expressing frustration with the low salaries and persistent barriers to economic ascension that they say they feel unable to escape.

So far, Mr. Petro, a former Bogotá mayor and a ex-member of a rebel group called M-19, is leading the polls against Federico Gutiérrez, a former mayor of Medellín representing a right-wing coalition.

Mr. Petro has rankled the right, and parts of the center, with his proposals to halt oil exploration and overhaul the pension system, while also drawing criticism from former allies, some of whom say he is an incapable administrator.

If Mr. Petro wins, Ms. Márquez is sure to try to push him toward a more feminist platform, and she has at times openly criticized his record on women’s issues.

In one presidential debate, Mr. Petro declined to offer full support for abortion rights, instead saying he would push for pregnancy prevention programs that would bring the country to “abortion zero.”

Today, for the first time, five of the country’s vice-presidential candidates are Afro-Colombian, something Mr. Guzmán attributed to Ms. Márquez’s rise.

“Once Francia became a candidate, inclusion became a central narrative in the election,” he said.

Like many activists in Colombia who challenge the status quo, Ms. Márquez has received repeated death threats.

At the campaign event not far from her hometown, Ms. Márquez stood surrounded by the Indigenous guard, a traditional security unit that carries wooden staffs meant to represent peace and strength.

Nearby was a squad of stone-faced plainclothes bodyguards, and beyond them, a circle of police officers in green.

In the crowd, amid a marimba player and a banner that read “dare to vote,” stood a cross-section of Colombia, including many women in turbans, which have come to symbolize Afro-Colombian struggle and strength.

Melba Sánchez, 67, in a purple turban, said she was there because “discrimination is what I have experienced most in life.”

On stage, Ms. Márquez said that if she’d followed the rules, she’d be washing dishes in a wealthy family’s kitchen.

“Part of what disturbs the elite,” she boomed, “is that a woman who was working in their homes, today is going to be their leader.”