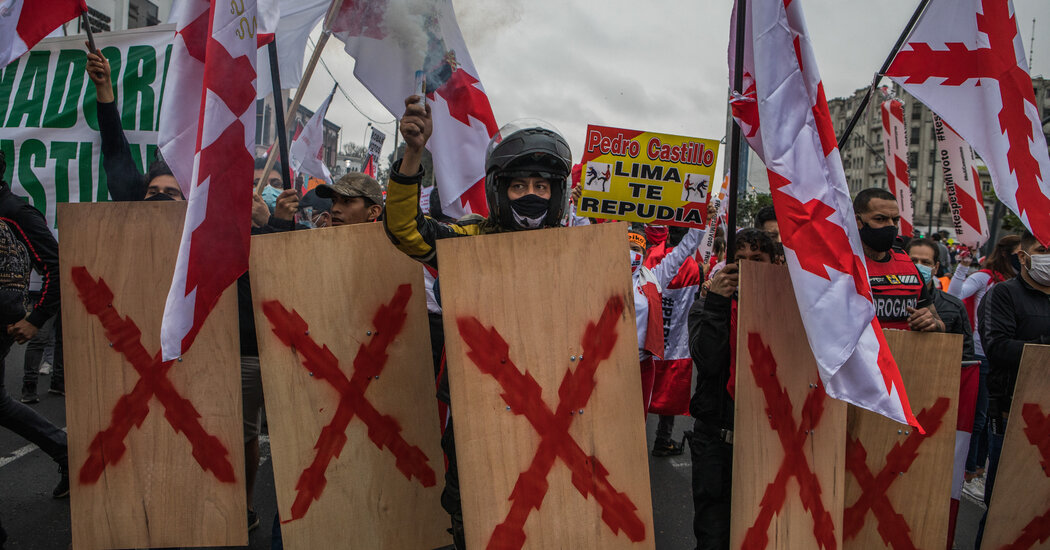 LIMA, Peru — They showed up for the rally by the thousands in red and white, the colors of their right-wing movement, swapping conspiracy theories and speaking ominously of civil war, some brandishing shields with crosses meant to exalt European heritage.

On the stage, their leader, the presidential candidate Keiko Fujimori, let loose on her headline issue: election fraud.

Though electoral officials say her opponent, the leftist union leader Pedro Castillo, leads by more than 40,000 votes with all the ballots counted, they have yet to declare a victor a month after the polls closed, as they consider Ms. Fujimori’s demand that tens of thousands of ballots be thrown out.

No one has come forward, even weeks later, to corroborate Ms. Fujimori’s claims of fraud; international observers have found no evidence of major irregularities; and both the United States and the European Union have praised the electoral process.

But Ms. Fujimori’s claims have not only delayed the certification of a victor, they have also radicalized elements of the Peruvian right in a way that analysts say could threaten the country’s fragile democracy, just as it struggles to beat back the pandemic and mounting social discontent.

Many in Peru have pointed out that Ms. Fujimori’s assertions echo those made by Donald J. Trump in 2020, and by Benjamin Netanyahu in Israel this year. The difference, they say, is that Peru’s democratic institutions are far weaker, leaving the country more susceptible to increasing turmoil, a coup or an authoritarian turn.

In Peru, those who think the election was stolen are concentrated in the upper classes of the capital, Lima, and include former military leaders and members of influential families. Some of Ms. Fujimori’s supporters have openly called for a new election, or even a military coup if Mr. Castillo is sworn in.

“I think in the end Keiko will leave the stage,” he went on. “But a very complicated scenario for the next government has been built.”

Going into the June election, Peru’s two-decade-old democracy was badly in need of a boost. The country had cycled through four presidents and two Congresses in five years, as lawmakers became enmeshed in corruption scandals and score-settling that diminished trust in political institutions.

Peru has also recorded the world’s highest per capita death toll from Covid-19 and has seen the virus push nearly 10 percent of its population into poverty, highlighting cracks in the country’s economic and social safety nets.

Voters could hardly have faced a starker choice when they went to the polls on June 6 to decide between Mr. Castillo, the son of peasant farmers who enjoys broad Indigenous and rural support, and Ms. Fujimori, a towering symbol of the Peruvian elite and the heir to a right-wing populist movement started three decades ago by her father, the former President Alberto Fujimori.

Millions of Peruvians who did not feel represented by previous governments were eager to celebrate the rise of Mr. Castillo, who has lived most of his life in an impoverished rural region.

Since the election, supporters of both candidates have taken to the streets in competing rallies.

“We’re Peruvians, too. We want to take part in the country’s political and economic decisions,” said Tomás Cama, 38, a teacher and Castillo supporter from southern Peru, standing outside the election office on a recent day.

But Mr. Castillo’s links to more radical politicians — his party is headed by a man who has praised President Nicolás Maduro of Venezuela for consolidating power — and his proposal to change the Constitution to give the state a greater role in the economy have fanned fears among affluent Peruvians.

Such fears have fertile ground in Peru after decades in which a violent insurgency with communist aims, the Shining Path, terrorized much of the country. They have also allowed Ms. Fujimori’s unsubstantiated fraud claims to gain strength: One recent poll showed that 31 percent of Peruvians thought the claims were credible.

Alleging that Mr. Castillo’s party manipulated official tallies at polling stations across the country, Ms. Fujimori is seeking to toss out up to 200,000 votes, mainly from rural and Indigenous regions where Mr. Castillo won by a landslide.

With a new president scheduled to be sworn in on July 28, many members of Peru’s elite are backing Ms. Fujimori’s efforts to nullify the votes. Hundreds of retired military officers have sent a letter to top military chiefs urging them to not recognize “an illegitimate president.” A former Supreme Court justice filed a lawsuit requesting that the entire election be annulled.

The country’s best-known public intellectual, the Nobel Prize-winning author and former presidential candidate Mario Vargas Llosa, has said he supports Ms. Fujimori’s efforts because a win by Mr. Castillo would be a “catastrophe.”

“That is evident to the immense majority of Peruvians,” he told a local television channel, “especially Peruvians from cities and Peruvians who are better informed.”

The narrative of a stolen election has taken on racist and classist flourishes at times. On the eve of the vote, false news reports circulated on the messaging application WhatsApp that Indigenous people had surrounded Lima, implying that they would use violence if Ms. Fujimori won.

In the crowd at one recent Fujimori rally, a group of young men wearing bulletproof vests and helmets marched with makeshift shields painted with the Cross of Burgundy, a symbol of the Spanish empire popular among those who celebrate their European heritage. One man flashed what looked like a Nazi salute.

Ms. Fujimori, the granddaughter of Japanese immigrants, part of a larger Peruvian-Japanese community, has allied herself closely with the country’s often European-descended elite, just as her father eventually did.

A number of her supporters have talked casually about their hope that the military will intervene.

“Just for a moment, until the military can say: ‘You know what? New elections,’” said Marco Antonio Centeno, 54, a school administrator. “The alternative is totalitarianism.”

At another pro-Fujimori rally, Mónica Illman, also 54, a translator who lives in an affluent part of Lima, said that until this year she had never taken part in a protest. But, citing assertions she had seen on Willax, a right-wing news outlet, she said she had been pushed to the streets by “an immense, terrible fraud.”

If Mr. Castillo is declared president, she said, “there’s going to be a crisis, a civil war.”

Ms. Fujimori’s election claims have also raised the profile of young right-wing activists like Vanya Thais, 26, who has been among the opening speakers at the candidate’s rallies and has used Twitter to summon some of her 40,000 followers to the streets.

In an interview, Ms. Thais said she had no doubt Mr. Castillo would revive the Maoist insurgency that terrified much of Peru in the 1980s and 1990s.

Ms. Thais said right-wing politicians and the business community had not taken a tough enough stance in recent years. But those days are over, she said: “This movement is here to stay.”

Delia Fiallo, Master of the Telenovela, Is Dead at 96