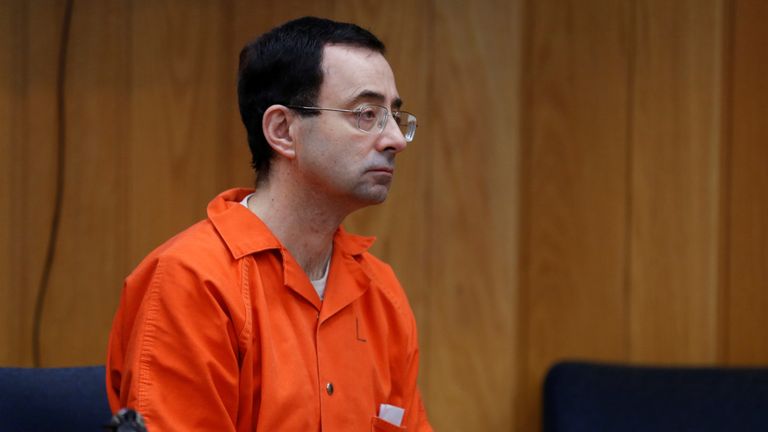 More than 90 women – including star gymnasts Simone Biles, McKayla Maroney and Aly Raisman – who say they were sexually assaulted by former US Olympic team doctor Larry Nassar – are seeking more than $1bn in damages from the FBI over its handling of the investigation.

The majority of the claimants say Nassar abused them after he was reported to the FBI in 2015, during a year-long period in which no meaningful investigative action was taken and he continued to sexually abuse young women and children.

Many are athletes who were associated with the USA Gymnastics programme or with Michigan State University, where Nassar had a clinic.

“It is time for the FBI to be held accountable,” said Maggie Nichols, a national champion gymnast at Oklahoma in 2017-19.

“If the FBI had simply done its job, Nassar would have been stopped before he ever had the chance to abuse hundreds of girls, including me,” said former University of Michigan gymnast Samantha Roy.

Under federal law, a government agency has six months to respond to the claims which were filed on Wednesday.

Nassar was sentenced in a federal court in 2017 to 60 years in prison on charges of possessing child sex abuse material.

The following year, he was also sentenced to up to 175 years and up to 125 years, respectively, in two separate Michigan courts for molesting female gymnasts under his care.

Thirteen other Nassar victims filed similar claims against the FBI in April.

While the latest lawsuit is not the first, it is the largest, with around 90 claimants, according to California law firm Manly, Stewart & Finaldi.

“I’m especially sorry that there were people at the FBI who had their own chance to stop this monster back in 2015 and failed. And that’s inexcusable,” he told victims at a Senate hearing.

Michigan State University, which was also accused of missing chances over many years to stop Nassar, agreed to pay $500m to more than 300 women and girls who were assaulted by him.

USA Gymnastics and the US Olympic and Paralympic Committee made a $380m settlement.