Haitian Activists Call for an End to Corruption and Violence 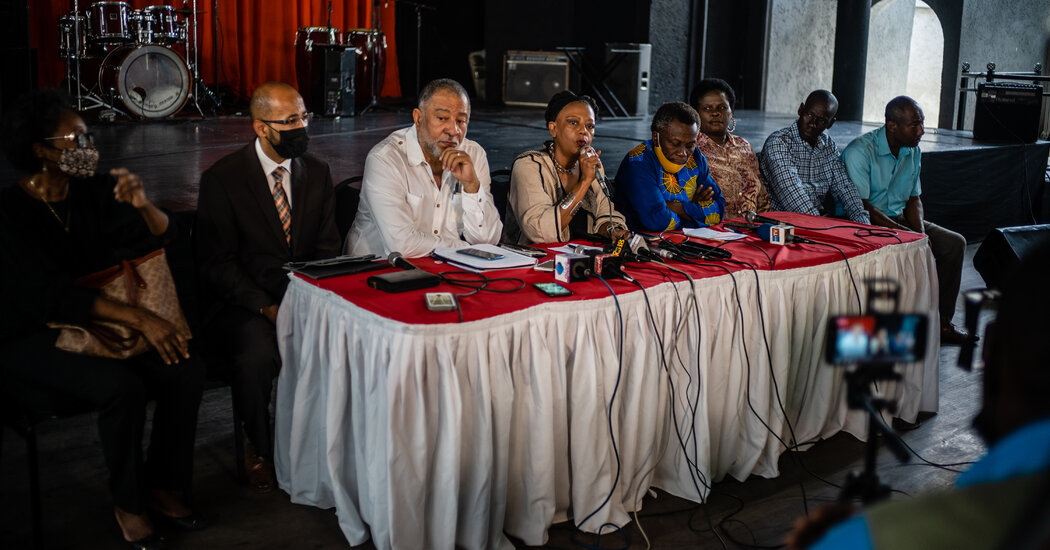 Some want a commission examining Haiti’s endemic corruption. Others want a plan on how to feed people in a nation where many go hungry. Then there are the pressing issues of joblessness and education, earthquake-battered infrastructure and women’s rights.

As political mayhem continued to buffet Haiti after the assassination of President Jovenel Moïse, a group of Haitian activists said it was daring to dream the seemingly impossible: an ambitious plan to rebuild the ravaged country from the ground up.

“This is a horrible trauma. It makes us feel smaller and more vulnerable,” said Magali Comeau-Denis, speaking to a large group of journalists gathered in the back of a restaurant in Pétion-Ville, an upscale suburb of Port-au-Prince, the Haitian capital, on Tuesday.

An outspoken businesswoman and restaurant owner, she spoke on behalf of a group of more than 100 civil society organizations known as “the Commission” — among them human rights groups, religious groups, the bar association, feminists, artists and farming collectives.

They are veterans of crisis who thought they had seen it all in recent years, looking on in outrage as the democracy they were fighting for was whittled away, gutted under the watch of Mr. Moïse.

Then the gunmen struck, and a country that had been adrift now felt rudderless. The few leaders left in the country were so busy jostling for power that it took them a week just to announce that they had formed a committee to organize the president’s funeral.

For months, as Haiti fell deeper into crisis over Mr. Moïse’s rule, with protests upending the nation and Parliament reduced to a shell in the absence of elections, the Commission had been meeting regularly, desperate to come up with a plan to get the country functioning again. Health care, a working judiciary, schools, food: Their goals were at once basic and ambitious.

Now all the focus seems to be on who will emerge as Haiti’s next leader, said Monique Clesca, a former United Nations official, a promiment Commission member. But the group wants the country to think bigger — to reimagine itself, and plan for a different future.

While they are still hammering out their plans, Ms. Comeau-Denis was emphatic about one thing: less fighting and more collaboration. “Together, we can become a force,” she said.

Among the group’s biggest concerns is corruption, and members said they wanted an inquiry into how foreign aid had been squandered in Haiti. Three damning reports by the country’s Superior Court of Auditors and Administrative Disputes revealed in lengthy detail that much of the $2 billion lent to Haiti as part of a Venezuela-sponsored oil program, PetroCaribe, had been embezzled or wasted over eight years by a succession of Haitian governments.

The call by Haiti’s interim prime minister, Claude Joseph, for the United States to send troops to Haiti to help stabilize the country has drawn loud criticism from the civil society leaders, who do not want foreign forces to step in. The issue of foreign intervention is especially sensitive in a former slave colony that has suffered historically under the repression of colonial powers like France. The United States has sent troops into Haiti several times, and occupied the country from 1915 to 1934.

“We have racist whites who want to impose their own solution,” said Josué Mérilien, an activist who fights for better conditions on behalf of teachers.